At least one person who attended a protest in Arizona over suspected election fraud had a heated run-in with law enforcement officers and was arrested, according to recent reports from people at the event. Arizona Family News reported that two protestors were cited and then released. But another man was put in jail, charged with trespassing and resisting arrest, witnesses said. The altercation happened in the House Gallery after the Maricopa County hearing on election fraud. Here’s another angle of the altercation that shows what happened from the beginning:

It appears that the person confronted was wearing a Guy Fawkes mask, but had pulled it up when the officer approached him. The people with him can be heard shouting that he was just sitting in his chair, not doing anything. One person on Facebook commented: “All because he has a Guy Fawkes mask on.”

Jessica Hall, who recorded the longer video, told Heavy that the altercation happened during the legislative session, after the special Election’s Committee hearing. She believed the officers involved were Capitol police officers. From her vantage point, she said, it appeared that he might have been choked.

You can watch the encounter from another angle, on the Periscope app here. The periscope video of the altercation is labeled “Az House protest breaks out in violence. Tucson, Arizona.” There was a separate protest in Tucson today too, at the federal courthouse. But this video of this altercation actually happened in Phoenix, despite the Periscope label.

Another commenter on Facebook said, “Even the official at the very end said that the person in the mask absolutely did nothing wrong.”

Here’s another angle of the altercation, at this link.

Janet Higgins also posted a video on Facebook of the incident:

She said that after the voter suppression hearing ended, they all chanted “Revote!” when they entered the gallery. They were told to quiet down and one person was removed. She said the guy seen in the video was sitting quietly alone and was given no warning. She later wrote, “We were at the point of chaos. All brought on by the police. For a man sitting quietly. With dreadlocks. His name is Jonathan S. McRae. He is currently in jail, charged with trespassing and resisting arrest. I disagree. He was harassed, held to the floor for over 5 minutes, and kidnapped. I don’t know if he was injured in the attack.”

Another person was pushed to the floor during part of the incident. This is her video: 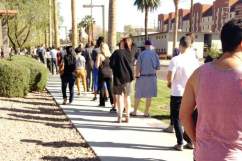