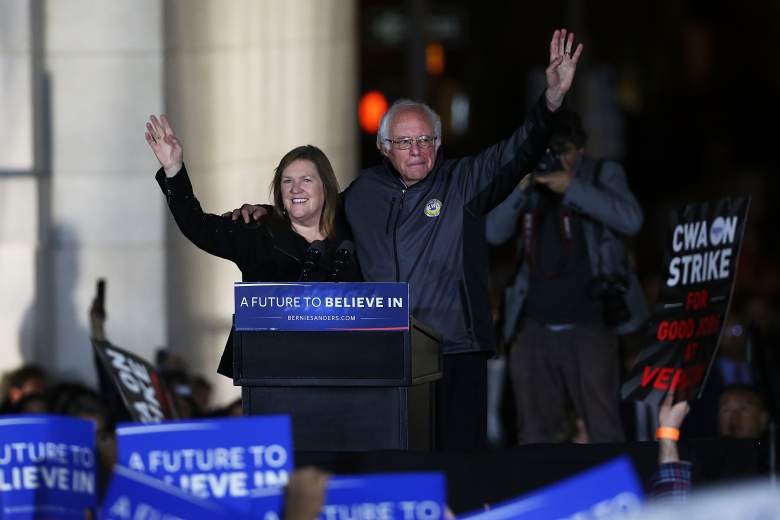 Democratic Presidential candidate Bernie Sanders stands on stage with his wife Jane O’Meara Sanders before speaking to thousands of people at a rally for in New York City’s historic Washington Square Park on April 13. In keeping with his debate promise, Sanders released his full 2014 tax return. (Getty)

In keeping with a promise he made during Thursday night’s debate, Bernie Sanders released his full 2014 tax return on Friday. It was a busy day for the Sanders family, as they had also traveled to the Vatican where Sanders talked about how to create a moral economy. Where can you go to see Sanders’ tax return?

The tax return shows his salary and an itemized list of deductions and income. We’re providing a few screenshots to help you decipher the return. It’s relatively straightforward, since Sanders has a lower income when compared to other candidates like Hillary Clinton. True to form, as Sanders warned, the tax return is “boring.” Additional returns will be released soon.

The 1040 summary of the tax return had already been released, quite a while ago. People were wanting to see all the schedules and itemized deductions, which are on this one.

Among the deductions on his 2014 return were:

Jane Sanders, his wife, also brought in an additional income of $4,900. As you can see in the screenshot below from the tax return, they did not claim any expenses from her business:

Some people are confusing the 2014 tax return, thinking he will be releasing his 2015 tax return. In fact, the 2015 tax returns aren’t even due until April 18. We don’t know if his wife Jane has finished those yet, but the returns promised during the debate were for 2014.

For more information about his tax returns and his debate with Hillary Clinton that started the conversation, please read this story:

Read More
Bernie Sanders, Breaking News, Politics
Follow Heavy ↓
wpDiscuz
3
0
Would love your thoughts, please comment.x
()
x
| Reply
In keeping with his debate promise, Bernie Sanders has released his full 2014 tax return. Here's where to read it and what is in it.