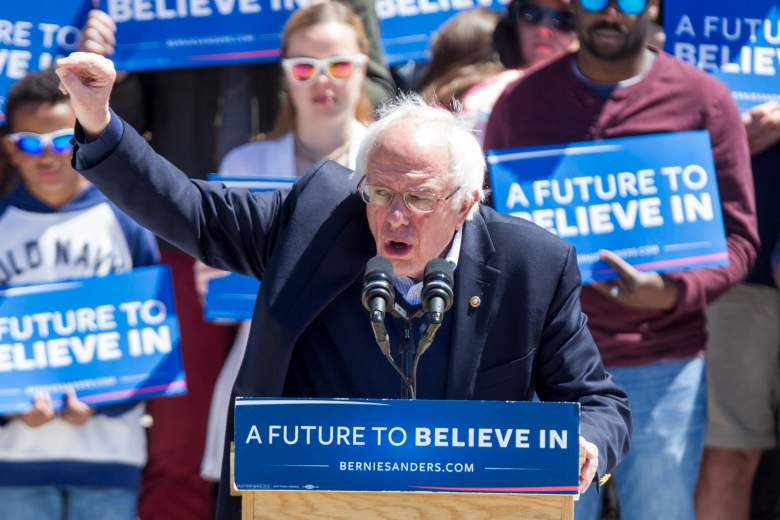 Numerous popular Bernie Sanders Facebook groups and pages were removed from the social media giant on Monday, causing hundreds of thousands of members to wonder exactly what was happening. The removals all began happening around the same time, with people wondering if the removals might originate from a PAC that supports a rival campaign or if it was just the work of unrelated trolls. Later news indicated it might at least partially be the result of a Facebook database error. What happened?

Bernie Sanders Groups With More Than 50,000 Members Were Removed 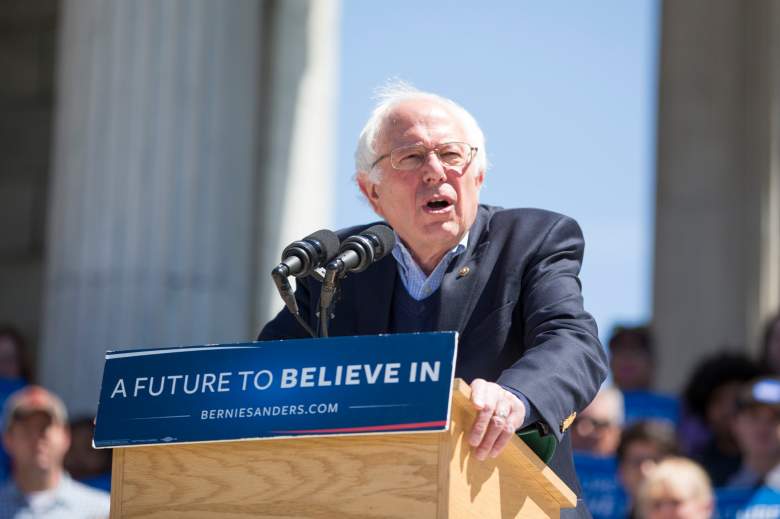 A number of Bernie Sanders Facebook groups, including some with more than 50,000 members, were removed from Facebook all around the same time on Monday. Facebook user Dorian Gray told Heavy.com that the synchronized attack appeared to take place while Sanders was talking at the Town Hall. It appears that at least some of the reports originated from Clinton supporters in a rival Facebook group, but a Facebook bug may have also been involved.

For groups that had been around for a while and were so popular, their removal was a pretty big deal and could have pointed to a massive, coordinated effort. The groups have already been reinstated. The removed groups included:

New versions of some of these groups were created, to help combat the removal, such as a new Bernie Believers that is at this link. And other new groups were created to help the supporters still find a place to gather, like Bernie Sanders Reconvenes.

Since the article was first published, all the groups have been brought back online as of late Monday night. Bernie Sanders is My HERO was one of the first to report being reinstated.

Some members of the Facebook groups reported that trolls had infiltrated the groups and were posting pornographic photos, some possibly even with pedophilia. Facebook user Dorian Gray posted to a different Facebook group, concerned that he had been banned for telling the administrators about the posts. But it turns out, it was the groups themselves that were banned. He said that he only saw two groups that had the pornographic posts before they were taken down: Bernie Sanders Is My Hero and Bernie or Bust 2016. Admins of the group removed the troll posters and all the pornographic-related posts. It’s unclear if the groups were later taken down because of those posts, since not all the Bernie groups had reported having such posts.

Members Wondered If the Removals Were Connected to Rival Political Groups, but a Facebook Bug May Have Been Involved

@janeosanders @TulsiGabbard @BernieSanders
Facebook has been infiltrated badly. BERNIE pages are being shut down or unable to post/share.

Some members of the Sanders Facebook groups, such as Liz Laguaite on Twitter, posted their concerns and wondered if this had any connection to rival political groups, such as a PAC supporting Hillary Clinton that was going to begin targeting posts written by Bernie Sanders supporters and other political groups. But an official from the PAC said they were not involved and did not condone such actions.

Screenshots provided by some members of the Bernie Sanders groups indicated the groups’ removal may have been at least partially the result of a group of trolls who supported rival political parties, working together to spread false reports about the groups. You can read more about this in the last section of this article.

Later reports indicated that a bug or glitch on Facebook may have also played a role. On Reddit, user imjoshs posted this thread and shared a photo of a message from Aidan King, the digital and social media manager for Bernie Sanders’ campaign. He said that he talked with Aidan King on the ConnectWithBernie slackchat and was told that there was a Facebook bug that closed many Facebook groups, not just Bernie Sanders groups. He added that when the bug took groups down, Facebook sent notifications to people who had filed reports against the groups, saying their report was “successful.” He shared this screenshot showing a message from Aidan King:

Supporters were concerned about potential Clinton PAC involvement because, according to the Daily Beast, a pro-Clinton Super PAC is spending $1 million to counter people on sites like Instagram, Reddit, Facebook, and Twitter. The group is Correct the Record’s “Barrier Breakers.” According to the PAC’s press release, the digital task force will share positive content and “push back” against online progressive communities to counter “false narratives” and negative attacks. The Super PAC openly coordinates with Clinton’s campaign, Daily Beast reported.

However, there’s no proof of any connection between that PAC and this attack, and definitely no proof of any connection between the PACs and the pornography posts, which were likely from unrelated trolls and spammers. In fact, Elizabeth Shappell, Communications Director from Correct the Record, contacted Heavy.com and shared that the group had no affiliation with those attacks and did not condone them:

Correct the Record strongly condemns any form of online harassment, vile language, explicit content, or bullying. Barrier Breakers 2016 had nothing to do with this incident, and anyone reporting otherwise is not reporting the truth. Barrier Breakers 2016 is currently engaging in only positive content supporting Hillary Clinton’s campaign to be our next president.”

Some Supporters of Rival Politicians Made False Reports, but the Bernie Groups Are Now Back

Guess a $million buys a few decent hackers. Here are Bernie Sanders Facebook pages that have disappeared so far: pic.twitter.com/4qCQ8QkbHK

The Bernie Sanders groups may have been affected by mass reporting from online users who claimed the groups were breaking Facebook rules and terms of service. The same thing happened to Election Justice USA last week, and the site was later reinstated. Admins told people on Reddit that they didn’t know why their Bernie Sanders pages were removed. Whether it was the result of a Facebook bug, mass reports from supporters of political rivals, or something completely different isn’t yet known for certain.

Facebook has automated systems that remove people and pages based on flags and reports sent from other Facebook users. Once an actual person reviews that removal and determines it was fraudulent, they can reinstate the page. An atheist group’s Facebook page experienced exactly this after Facebook was inundated with flags from people who cited the page as being guilty of “bullying.” These were later determined to be false citations from people who didn’t like the page, and the page was reinstated.

Screenshots have surfaced pointing to a possible coordinated attempt at “mass reporting” the Bernie Sanders pages for false violations. Kristen Fumarola shared with Bernie Sanders supporters a few screenshots of conversations between possible trolls on Facebook:

Some of the efforts stemmed from some individuals in a Facebook group called Bros4Hillary. In the group, one person made a public post that included a screenshot of the above photo with a comment that there was a “mole” in the group. The group then went private, in part because the members’ posts weren’t condoned, as the group’s political director says in a statement below.

Another screenshot that Kristen Fumarola shared on a Bernie Sanders Facebook group showed reactions to the post:

A public post to the group page late Monday night showed the following:

This appears to be against “Bros4Hillary’s” main mission, which includes “Be respectful to others.” Bros4Hillary’s Political Director, Alex Mohajer, contacted Heavy to let us know that the group does not condone those actions.

“Bros4Hillary was created as a way to provide a positive and supportive community for supporters of Hillary Clinton to gather, and as a direct response to the hateful and divisive rhetoric used by other campaigns during this election cycle,” he said. “We have not and do not approve of or condone harmful or offensive rhetoric or harassing behavior targeting supporters of any other candidate in the race…”

He then addressed specifically what happened on Monday.

“Last night, a former member … decided to engage in harassing behavior toward Facebook groups of Bernie Sanders and posted about it in the B4H Facebook group,” he said. “…This was not promoted or supported by the leadership of B4H… We removed the offending posts and member as soon as possible.”

While our leadership team of administrators tries to catch every questionable post and comment, with over 7,000 members and on a 24-hour posting cycle, some fall through the cracks. We … apologize to the groups that were affected. This member acted on his own authority, is not apart of our leadership team, and does not represent our ideals or our opinions.

Mohajer said that his group will go live again soon and they’re excited about the future of the political campaign and the money they’re raising, and they regret the actions of a few that spoiled the work of many.

All of the Bernie groups have since been reinstated. But their deletion pointed to how easily a coordinated online attack can bring a page down. Even if it ultimately ends up being partially caused by a glitch, Election Justice USA’s group was removed last week, and it appears there was not any bug involved in that incident. Facebook may need to review their system and the automatic removal of groups based solely on mass flags and reports. 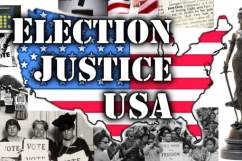 Loading more stories
wpDiscuz
144
0
Would love your thoughts, please comment.x
()
x
| Reply
Bernie Sanders Facebook groups, many with more than 50,000 followers each, were banned en masse. What happened? Who's the source? Did the pages return?