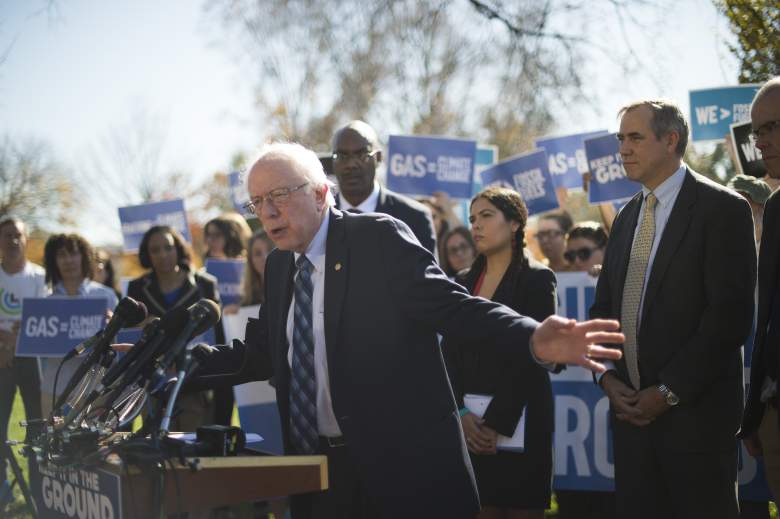 Bernie Sanders at an anti-drilling rally with Senator Jeff Merkley in the background. (Getty)

Senator Jeff Merkley, a Democrat from Oregon, became the first Senator to endorse 2016 presidential candidate Bernie Sanders on Tuesday. Writing in an op-ed for the New York Times, Merkley praised Sanders for his commitment to a “political revolution:”

It is time to recommit ourselves to that vision of a country that measures our nation’s success not at the boardroom table, but at kitchen tables across America. Bernie Sanders stands for that America, and so I stand with Bernie Sanders for president.

Merkley was elected to the Senate in 2008, defeating two-term incumbent Gordon Smith, after serving as Speaker of the Oregon House of Representatives. Sanders and Merkley had previously collaborated on environmental initiatives. 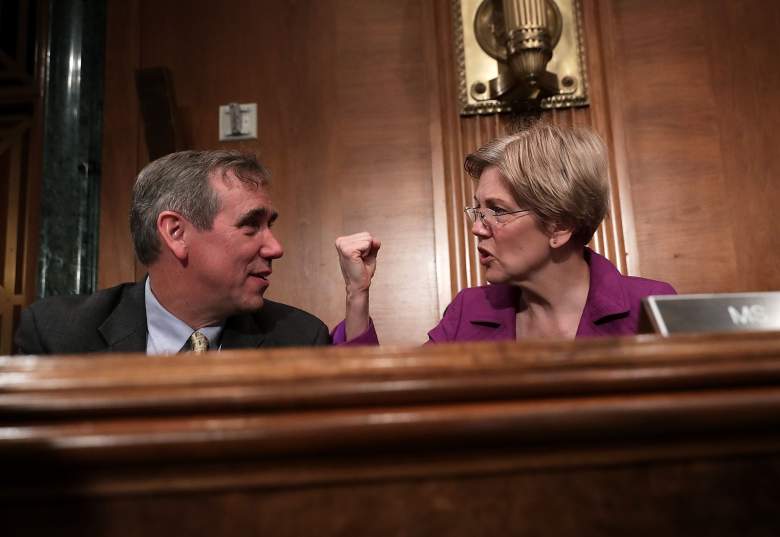 Jeff Merkley with Senator Elizabeth Warren (D-Massachusetts). Warren has defended Sanders from critics but has not endorsed a 2016 primary candidate. (Getty)

Prior to Merkley’s endorsement, Bernie Sanders had eight endorsements from Representatives but had not captured the support of a sitting Senator. 2016 rival Hillary Clinton, meanwhile, has the endorsement of nearly 40 Senators, but major targets, including Sanders’s like-minded colleague Elizabeth Warren, has yet to endorse.

Election forecaster FiveThirtyEight weighs and ranks endorsements in its “Endorsement Primary,” places Clinton well ahead of Sanders in the support game. This election cycle, however, has led to questions on the importance of endorsements, with several candidates on the GOP side making early exits even after garnering impressive support.

In an interview with MSNBC’s Joe Scarborough and Mika Brzezinski, seen above, Merkley spoke about the New York Daily News interview that was called a “disaster” for Sanders. In the interview, Sanders appeared to commentators unaware of the specific regulatory details of his financial overhaul plan. Merkley admitted that the interview might not have been the moment where Sanders put his best foot forward, but defended the “totality of [Sanders’s] record” in pushing Wall Street reforms.

Merkley specifically pointed out three specific reforms Sanders had supported in the wake of the 2008 financial crisis:

The Daily News endorsed Hillary Clinton not long after the interview, ahead of the New York primary. 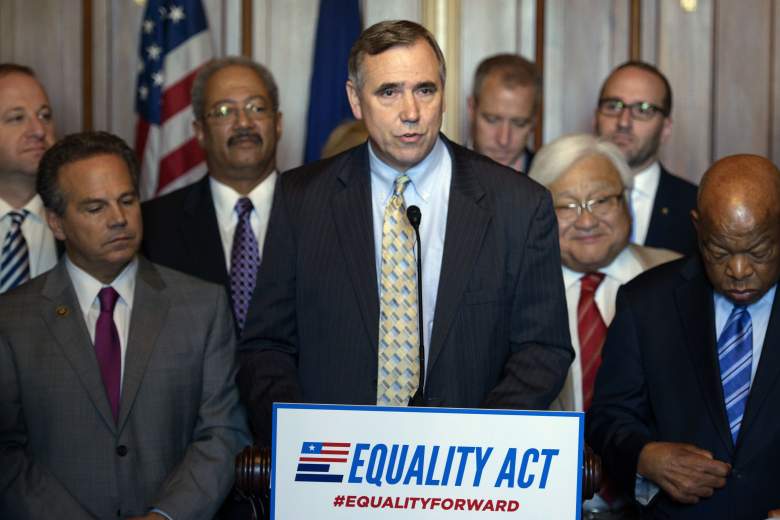 Jeff Merkley during a press conference for an anti-discrimination legislation push. (Getty)

In his op-ed, Merkley shied away from criticizing Hillary Clinton in praising Sanders. He did not extend this civility, however, to the Republicans:

Unlike the Republican primary circus, Democrats have a choice between two candidates with lifelong track records of fighting for economic opportunity and who are committed to America’s being a force for peace and stability and who are eager to meet today’s challenges and move our country forward for all its citizens, together.

From her time advocating for children as a young lawyer to her work as first lady of Arkansas and the United States, and as a senator and secretary of state, Hillary Clinton has a remarkable record. She would be a strong and capable president.

But Bernie Sanders is boldly and fiercely addressing the biggest challenges facing our country.

He previously praised her commitment to environmental issues:

.@HillaryClinton is right: Arctic drilling is not worth the risk—my bill puts it off limits http://t.co/en1wRd84Rf https://t.co/qpIn38SuY2

His apparently high opinion of Clinton hasn’t stopped him from calling her out before. Early in the campaign he urged her to take a stand on the controversial Trans-Pacific Partnership, saying that there were “major concerns—and she should speak to them.” Merkley mentioned trade deals in his endorsement of Sanders:

He has opposed trade deals with nations that pay their workers as little as a dollar an hour. Such deals have caused good jobs to move overseas and undermined the leverage of American workers to bargain for a fair share of the wealth they create in our remaining factories.

Sanders has opposed nearly every trade deal in recent United States history, which has garnered both criticism from analysts and praise for foresight. 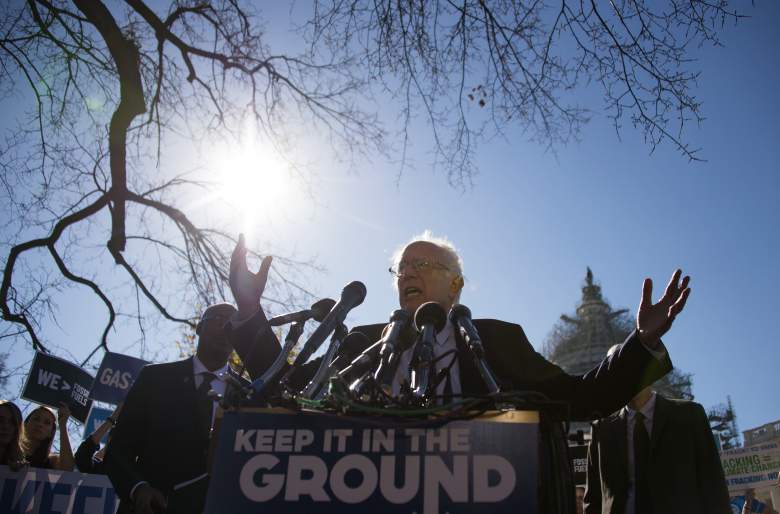 Bernie Sanders at an anti-drilling rally on Capitol Hill. Merkley is in the background, obstructed by Sanders’s left arm. (Getty)

In 2015, Merkley and Sanders introduced a bill that would prevent new leases of federal land for the purposes of oil and gas drilling, and revoke active leases that were not operating. Sanders and Merkley were joined by Patrick Leahy, with co-sponsorship from Ben Cardin (D-Maryland), Barbara Boxer (D-California), Kirsten Gillibrand (D-New York) and Elizabeth Warren (D-Mass.) The Keep It in the Ground Act was referred to committee in late 2015.

Merkley referred to Sanders’s environmental work in his endorsement:

He has passionately advocated for pivoting from fossil fuels to renewable energy to save our planet from global warming — the greatest threat facing humanity. He recognizes that to accomplish this we must keep the vast bulk of the world’s fossil fuels in the ground.

Sanders has touted his environmental record while on the campaign trail. He has also attacked Hillary Clinton’s support from fracking advocates. 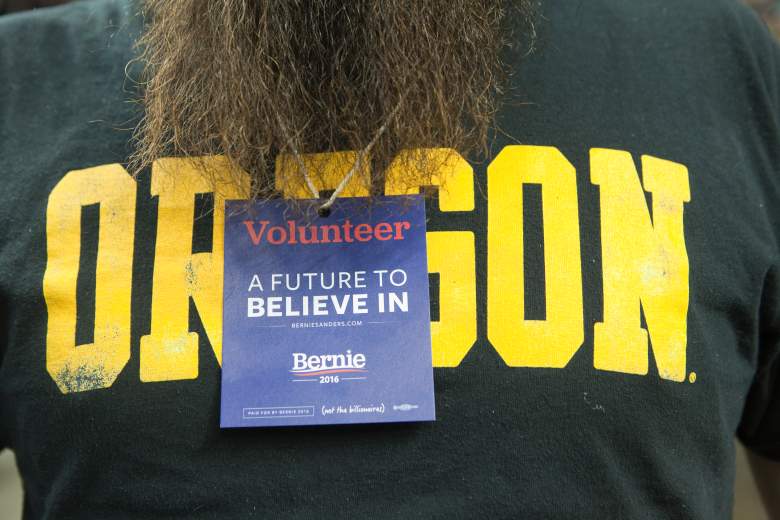 A volunteer for Bernie Sanders at a rally in Portland, Oregon. (Getty)

Voters in Oregon’s May 17 primary will decide on how to award 74 delegates. Given Sanders’s deficit of more than 200 pledged delegates and more than 400 superdelegates, a big margin in the state will be crucial for him. FiveThirtyEight projects a needed margin of more than 20 points for Sanders in Oregon

While there are no recent polls for the Oregon primary, the state is demographically similar to neighboring Washington, which Sanders won by nearly 50 in April.

As a Senator, Merkley is a superdelegate, meaning that his commitment to Sanders will stand even in the event that Hillary wins significantly in Oregon.

Read More
2016 Presidential Election, Bernie Sanders, Politics
wpDiscuz
5
0
Would love your thoughts, please comment.x
()
x
| Reply
Jeff Merkley of Oregon is the first US Senator to endorse Bernie Sanders, writing in the New York Times that Sanders had "galvanized a grass-roots movement." Here's what you need to know.