After hearing the news that Prince died at the age of 57, the internet has erupted with words of sorrow and surprise. Fans all over the world are taking to social media to express their devotion to the late musician, including a ton of celebrities.

Everyone from President Obama and Justin Timberlake to Latoya Jackson and Demi Lovato to Shonda Rhimes and Billy Idol are tweeting about Prince’s untimely death:

"Nobody's spirit was stronger, bolder, or more creative." —The President and First Lady on the passing of @Prince. pic.twitter.com/4XnpGBrxMV

If the news about prince is true it will be a terrible loss of such an amazing music legend and icon.

This better not be true…

"Devastated to hear the news about Prince. An enormous talent that we were all big fans of." – Duran Duran pic.twitter.com/478Q9dVF7K

Crushed to hear the news about Prince… What an artist. What an influence. Thank you for the love. And the funk ✨

I'm Crushed!! UK news reporting Prince Is Dead?! For Real?! Massive Loss for us all! What a Genius! Speechless.

In Minneapolis right now…and it's raining…

Please no! Some one please tell me it isn't true #PRINCEWILLNEVERDIE

my heart feels so heavy.

Numb. Stunned. This can't be real.

One of my biggest inspirations. A true icon. You will be missed. Sad sad news today… #RIPPrince

"It's such a shame our friendship had to end." #RIPPrince

This is what it sounds like when doves cry.. Prince R.I.P.
Condolences to his family & 2 us all

Another icon gone too soon.

And just like that…the world lost a lot of magic ✨ Rest in peace Prince! Thanks for giving us so much…

PRINCE . You legend. Rest In Peace

Prince was brilliant and larger than life. What a sad day.

Thank you Prince. All my thoughts & prayers are with all your loved ones. https://t.co/JT52sKlJBJ

Meeting big stars is mostly disappointing in one way or another, but that was not the case w Prince. He was everything I hoped he'd be.

So sad to hear about Prince- We've not only lost an incredible talent but we've lost a legend. ?

"Artist" & "Genius" are thrown around carelessly these days. Prince Rogers Nelson was an actual artist & a legit genius. I'm so sad#RIP

I am shocked and saddened by the news of the death of Prince. A great brother and music genius.

I loved this Man. Too soon. Can't comprehend it but it's unfortunately true. Heaven is yours. RIP #Prince #RIPPrince pic.twitter.com/EH8paEvn75

We've just lost an incredible talent! So sorry to hear about #Prince we will always love your music forever and ever! #RIPPrince

What a sad day today! Terribly sorry to hear that #Prince has passed! What an incredible talent… https://t.co/uxkUwX2PkA

Other celebrities, including Diana Agron, Madonna, Lena Dunham and Sarah Jessica Parker have been posting their favorite images of Prince on Instagram. 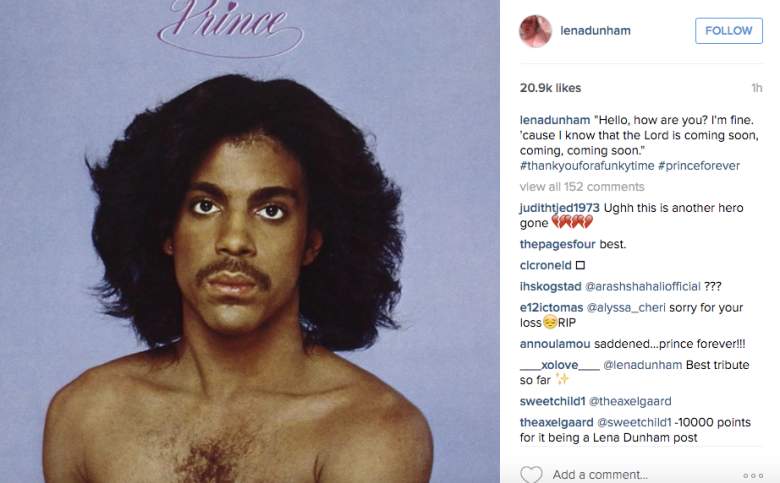 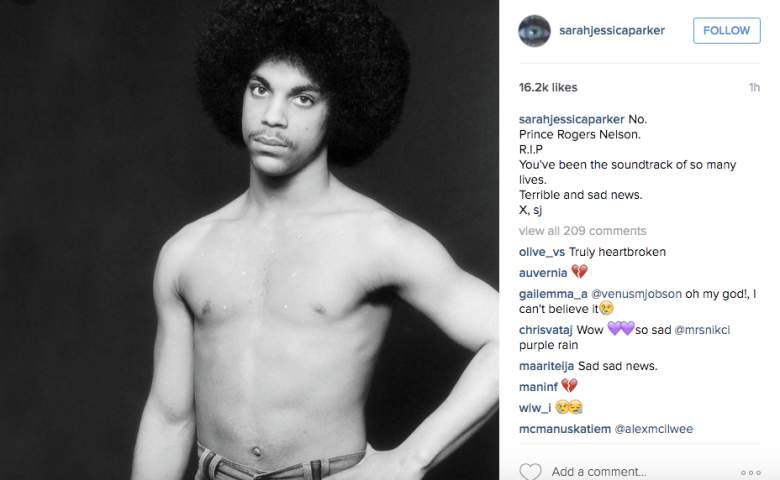 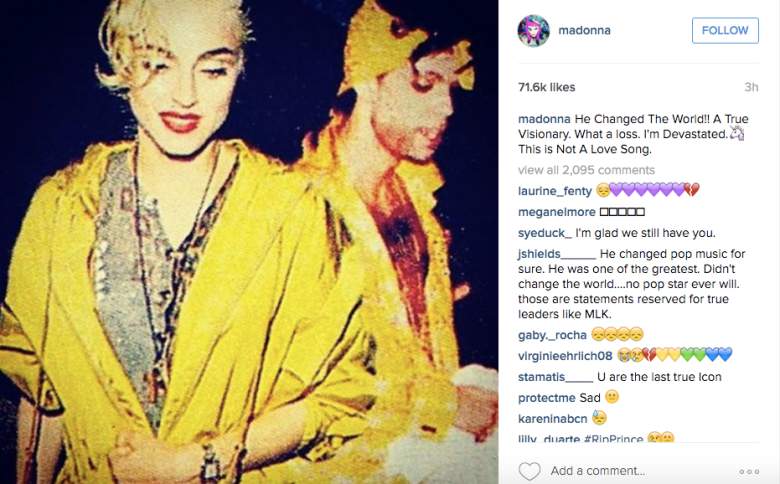 Madonna shares a photo of she and Prince in memory of Prince who died today. (Instagram/@madonna)

The musician, whose birth name is Prince Rogers Nelson, died Thursday morning at his Paisley Park residence in Chanhassen, Minnesota.

Prince’s death comes less than a week after he was hospitalized with a bad flu. The singer, born Prince Rogers Nelson, was best known for his flamboyant stage performances (as well as his short stature, standing 5 feet, 2 inches) and his many hit songs including “1999,” “When Doves Cry” and “Kiss.” 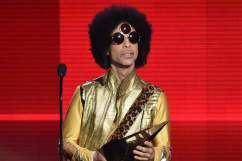