Video recorded by an officer’s body camera has been released showing the shooting of a knife-wielding murder suspect last week in Glendale, Ohio.

Javier Aleman, 46, survived the shooting and is recovering in a hospital, the Cincinnati Enquirer reports.

In the video, Aleman, who police did not know was wanted for murder, can be seen holding a knife. He begs for Officer Josh Hilling to kill him, asking more than 40 times, prosecutors say. The incident happened on the side of Interstate 75.

You can watch the video below (warning, the video is graphic):

Aleman is wanted in connection with a fatal stabbing in Baltimore County, Maryland, prosecutors say.

“He showed remarkable restraint in the confrontation of an individual who was clearly armed,” Deters said. Hilling has been cleared of wrongdoing.

In the video, Hilling approaches Aleman on the side of the highway. Aleman asks how to get to Cincinnati, and Hilling tells him he can’t walk on the highway, before asking other questions about where Aleman is coming from.

After about a minute and a half of questioning, Hilling tells Aleman he is going to pat him down, which is when Aleman pulls out a knife. Hilling draws his gun as Aleman says, “kill me,” “kill me now.”

Hilling then shoots Aleman in the abdomen, knocking him to the ground. As Hilling calls in the shooting, Aleman stands back up and begins approaching him again, with the knife still in his hand, saying, “I’m going to kill you.”

The officer shouts at Aleman to “get down,” repeatedly, “stay down.”

Aleman was eventually stopped with a Taser and taken to the hospital. 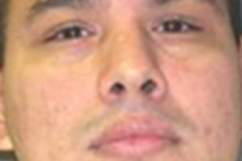