An investigation is underway after a video was posted online showing a San Antonio, Texas, school police officer body-slamming a girl face first onto concrete. You can watch the video above.

The incident occurred March 29 at Rhodes Middle School, but the video was first posted online on April 5, ABC News reports.

Officer Joshua Kehm was placed on administrative leave while the investigation is completed, according to the district.

The incident began as an argument between two girls, district officials said.

“This video is very concerning, and we are working to get all of the details,” district spokeswoman Leslie Price told the San Antonio Express-News. “We certainly want to understand what all occurred, and we are not going to tolerate excessive force in our district.”

Josh Kehm, 27, has been employed by the San Antonio school district since February 2015, according to his now-deleted Linkedin page. He is an Air Force veteran.

The girl’s father, Raul Valdez, says the incident left a bump on his daughter’s head. She has also suffered headaches.

“It hurt me really bad that a grown man could do that to a little girl. I want to confront the officer, but thought it would be better to do everything legally,” Valdez told the San Antonio Current. “I want justice for my daughter. These police are getting out of hand. They think they are above the law.” 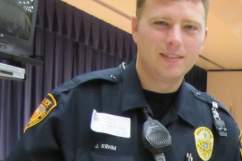