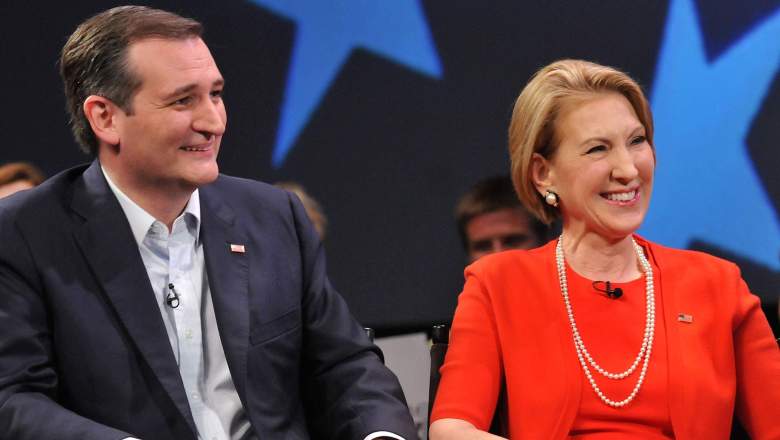 Fiorina and Cruz at a Florida church. (Getty)

Ted Cruz tapped Carly Fiorina as his running mate in a “major announcement” at his April 27 rally. Cruz, who won the Iowa caucus and several March GOP contests but has seen his campaign take a disastrous turn through April. Cruz is running several hundred delegates behind frontrunner Donald Trump and needs a major play, including in May 3’s Indiana primary, to keep Trump from sealing the nomination before the convention. Picking Fiorina should help balance the ticket between establishment and anti-establishment sentiment, but Fiorina’s loyalty to Cruz, especially in defending against spurious rumors regarding his character, helped seal the deal for Cruz in picking her as his VP.

Fiorina and Cruz have worked together throughout the campaign, with a Cruz Super PAC donating to Fiorina early in the campaign cycle and Fiorina joining Cruz on the campaign trail starting in March. Cruz admitted that Fiorina was on his short list for the slot in late April.

1. Cruz Called Her the ‘One of the Most Talented Business Leaders of Modern Times’

The Cruz campaign told the media that he had been vetting VP candidates and had narrowed to a short list in recent weeks. Cruz campaign director Chad Sweet confirmed to CNN’s Jake Tapper that the list included Fiorina:

He is vetting a number of solid candidates, and certainly Ms. Fiorina is absolutely one of them. She’s one of the most talented business leaders of modern times.

WMUR reported on April 27 that the decision to tap Fiorina had been made. The New Hampshire-based news organization cited her record in business and as an “effective Clinton critic” as major influences on Cruz’s decision.

2. She Endorsed Him After Suspending Her Own Campaign 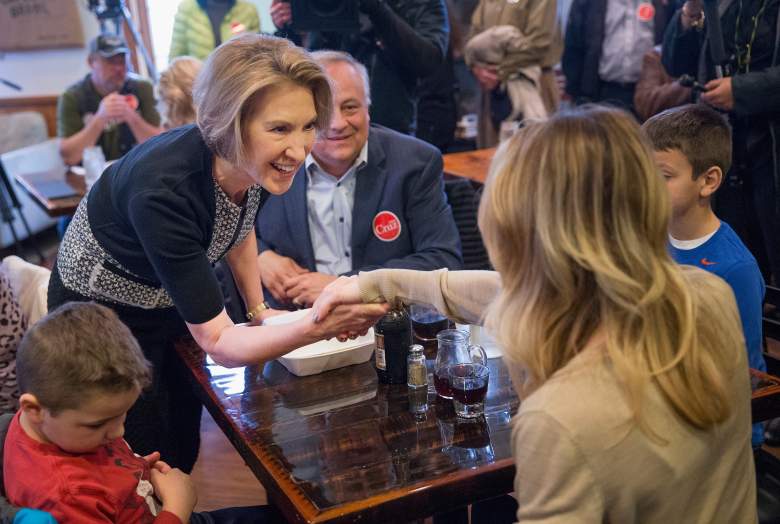 Fiorina at a Cruz event in Wisconsin. (Getty)

On March 10, Fiorina endorsed Cruz, soon after joining him on the campaign trail. Though she praised Cruz for his constitutionalist, “God-fearing” values, much of her endorsement was couched in opposition to Trump:

The only way to beat Donald Trump is to beat him at the ballot box. And guess what, the only guy who can beat Donald Trump, who has beaten Donald Trump, is Ted Cruz. Ted Cruz is a fearless fighter for our constitutional rights. He has spent his life protecting Americans’ God-given liberties, and he has always stood by his word.

She joined Cruz later for an unsuccessful bid in Florida, where ABC News captured video of her discussing her Virginia vote experience: 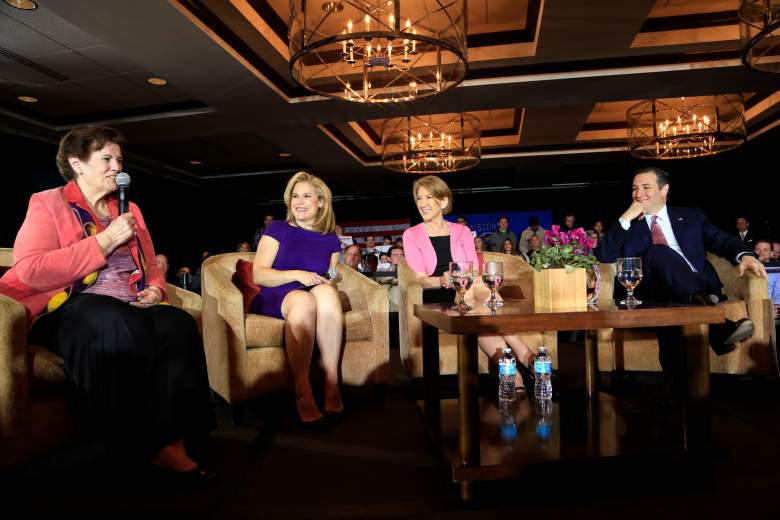 Fiorina with Cruz, along with Cruz’s wife and mother. (Getty)

In July 2015, with both campaigns in full swing and seemingly against one another, a Ted Cruz-affiliated Super PAC, Keep the Promise I, donated $500,000 to the Fiorina campaign. The move came without much precedent in electoral politics, and prompted the FEC to send a letter requesting clarification. The FEC said the move was not any indication of wrongdoing, and was common when the purpose of the donation was not immediately clear.

Keep the Promise I president Kellyanne Conway denied any wavering from Ted Cruz, but said it made the donation in appreciation of Fiorina’s anti-Hillary Clinton rhetoric:

Keep the Promise I made the donation in June to Ms. Fiorina at that time because we thought she had important things to say that weren’t being heard, including her poignant and effective criticism of Mrs. Clinton, at the time, the likely Democratic nominee. However, we are all in for Ted Cruz for President, as our current activities demonstrate, and will continue to support him and his message all the way to the White House.

4. She Can Help His Standing With Establishment Republicans 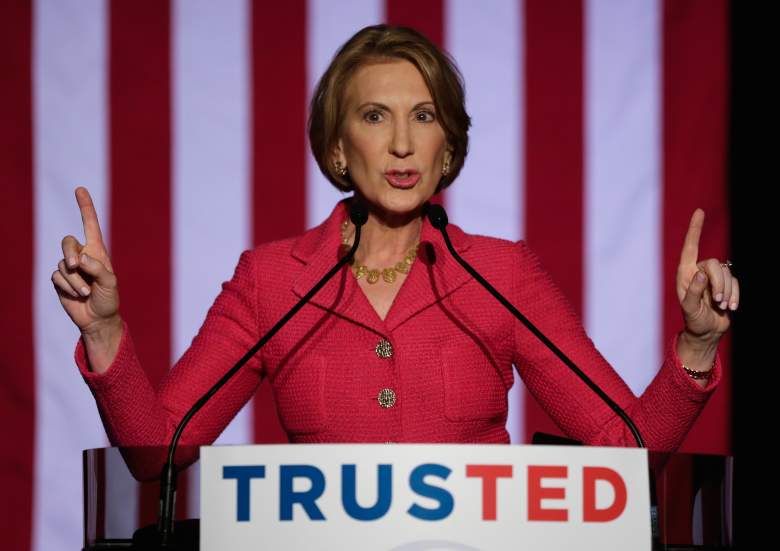 Cruz began his electoral career as fiercely anti-establishment candidate and Senator. He referred to his fellow Republican Senators as a “surrender caucus” in 2013, and has an acrimonious relationship with his colleagues that only three have endorsed him. Cruz’s anti-establishment placement, however, has been outflanked by Trump, to the point where he now has to turn to the establishment he once derided to have a shot at the nomination.

Fiorina could help him win the support of centrist Republicans. Briefly considered the best center-right option, she gave the keynote address at the 2016 Conservative Political Action Conference, a major right-wing convention. While she has criticized the establishment and even sympathized with Trump, her business record and ability to hit on Clinton’s weak spots has been cited as potentially attractive to centrists looking for a middle-of-the-road option. 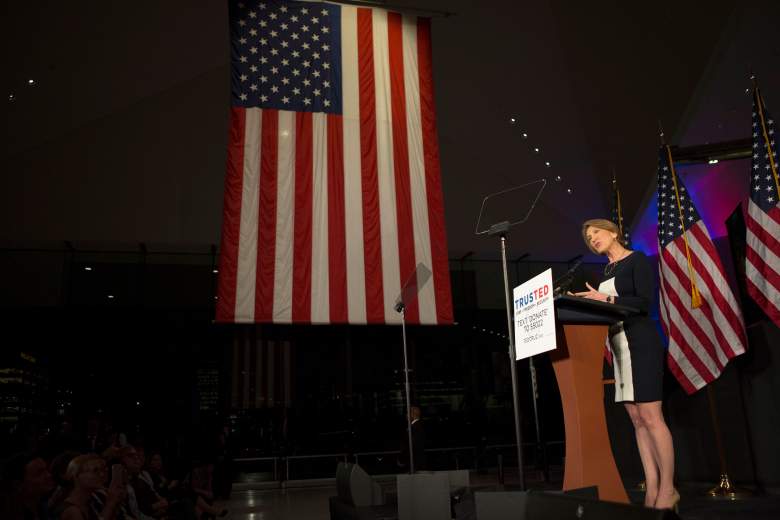 Fiorina at a Cruz rally in Pennsylvania. (Getty)

In March 2016, spurious National Enquirer allegations hit newsstands alleging Ted Cruz affairs with five women, and ran five pixelated photos supposedly of Cruz’s partners, one of which was of former Fiorina aide Sarah Isgur Flores. Cruz immediately denied the stories, suggesting that the Trump campaign was responsible for the “complete and utter lies.” Fiorina herself joined in defending Cruz, upbraiding a Daily Mail reporter who raised the question:

I’m going to comment. This is an example of the media playing to Donald Trump’s tune. Donald Trump is a serial philanderer, by his own admission. And in a week when we have had a terrorist attack in Brussels, a shooting at the Capitol, the president of the U.S. in the baseball stands with Raul Castro, and insisting he be photographed in front of a picture of Che Guevara with the two Castro brothers, we are talking about a scurrilous, ridiculous piece in the National Enquirer?

Why? Why? Why do you dance to Donald Trump’s tune?

Let’s talk about the issues.

The allegations were not further substantiated, and the story died quietly, but Fiorina’s defense stuck with Cruz. Tim Alberta of the National Review, however, reports that the moment marked the beginning of her rise to his VP pick:

The incident convinced Cruz of both her unshakable loyalty and her unrivaled talent as a Republican attack dog — and not just against Trump in the primary. ‘Let me tell you,’ Cruz said the next morning, nodding toward Fiorina during a stop in suburban Milwaukee, ‘that woman gives Hillary Clinton nightmares.’ 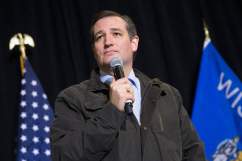 Loading more stories
wpDiscuz
4
0
Would love your thoughts, please comment.x
()
x
| Reply
Ted Cruz and Carly Fiorina have been close since she ended her campaign, and he has now tapped her as his running mate at a rally in Indianapolis.