How does the fabulous new Tesla Model 3 compare to the Model X? (Tesla Livestream)

The new Tesla Model 3 was just unveiled and more than 150,000 orders have already been made for the brand new car in the last 24 hours. It’s not going to replace the Tesla Model S. Rather, it’s going to be a more consumer-friendly model available for a lower price but still featuring cutting edge technology. How does the Tesla Model 3 compare to the Tesla Model 2? What are the two car’s costs, features, speed, and range?

Here’s what we know so far. We’ll add more specs for the Model 3 as they are available. Elon Musk has said that we can expect certain key features of the Model 3 to evolve or change before it goes into production in 2017.

The biggest differences between the Model 3 and the Model S come down to a few key points:

Here are the detailed specs of the Model 3 and the Model S that we know so far:

Cost: It will cost $35,000 for the base price, before government incentives of $7,500 to $13,000, depending on the state. After Tesla has sold 200,000 cars in the U.S., the government incentives will stop. Unlike the other models, this one won’t have a souped-up signature series, but you can still get upgrades.

Speed: 0 to 60 mph in less than six seconds for the base model. Other versions will likely be much faster.

Range: At least 215 miles per charge for the base version. It features a new battery architecture and some rumors have hinted that there may be a future version with 80kWH that can drive five hours, nearly 364 miles, without a charge, which would be better than the Model S 90D. But right now, according to the press conference, it’s at 215 miles per charge. The car will also come with supercharging standard.

Motor Power: The car has new motor technology as compared to previous models.

Appearance Features: The car will be 20 percent smaller than the Model S. Its appearance has been described as “sexy and sporty” and a hybrid of the Model X and Model S. The car was absolutely gorgeous as shown during the press conference.

Inside the Car and Dimensions: The inside of the car is beautiful. It will fit five adults comfortably, with plenty of legroom and headroom. This was achieved by shrinking the instrument panel and moving the front seats forward. The roof area is one continuous panel, allowing for a feeling of freedom and openness. The car also has a front and rear trunk, just like the Model S. It has more cargo capacity than any gasoline car of the same dimensions. “Can it fit a seven-foot long surfboard inside?,” Elon Musk asked. “The answer is yes.”

Warranty: Similar to the Model S, with an eight-year, infinite-mile, transferable warranty on the battery pack and drive unit, according to Musk.

Autopilot? Yes. This lets the Model S steer within a lane and change lanes with just a tap of the turn signal. It uses traffic-aware cruise control to manage speed. Digital control of brakes, steering, and motors also helps the driver avoid wrecks and prevents the car from drifting off the road. Autopilot also lets the Model S scan for parking, alert you to one that’s available, and parallel park on command. The software is constantly being updated. The current version is 7.1.

Safety Rating: 5 star in all categories from the NHTSA crash test. The drivetrain lowers the car’s center of gravity, minimizing rollover and more.

Appearance Features: The car is streamlined. The doors have a zero profile and the handles extend when the key is close. It also lacks a fuel door. When you approach the taillight with a charging connector, a hidden port will open. 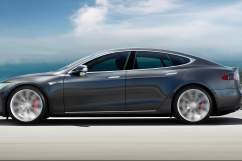 Tesla Model 3 Live Stream: How to Watch the Unveiling Online

Loading more stories
wpDiscuz
3
0
Would love your thoughts, please comment.x
()
x
| Reply
The Tesla Model 3 and the Model S are two cutting edge cars. How do the two cars compare? What are their specs? How much do they cost? Which is better?