An iconic photo showing a Haitian immigrant crying during his graduation from West Point has gone viral. On his Facebook page, 2nd Lt. Alix Idrache wrote on May 25, “I woke up this morning and found my face all over Facebook and with it myriad of amazing comments about my accomplishments. I am humbled and shocked at the same time. Thank you for giving me a shot at the American Dream and may God bless America, the greatest country on earth.”

The picture, which was taken by Army Staff Sgt. Vito T. Bryant, showed Idrache with tears streaming down his face while he clutched his army cadet headgear tightly. It was first published on West Point’s Facebook page on May 24 and attained viral success almost instantly.

1. Idrache Has Been Serving for 2 Years as an Enlisted Soldier in the Maryland National Guard

After leaving Haiti for the U.S., Idrache spent two years in the Maryland National Guard while he earned his citizenship, reports the Washington Post.

The picture was also posted to West Point’s Instagram page. In the comments section, Idrache thanked those who were sharing the photo. He said:

I want to thank everyone for your kind and thoughtful comments on this picture. SSG Bryant captured a moment that I will never forget. At this moment, I was overwhelmed with emotions. Three things came to mind and led to those tears. The first is where I started. I am from Haiti and never did I imagine that such honor would be one day bestowed on me.

The second is where I am. Men and women who have preserved the very essence of the human condition stood in that position and took the same oath. Men who preserved the Union is a dark period of this country’s history. Men who scaled the face of adversity and liberated Europe from fascism and nazism. Women like CPT Griest, LT Haver, MAJ Jaster who rewrote the narrative and challenged the status quo to prove themselves worthy of being called Rangers. The third is my future. Shortly after leave, I will report to FT. Rucker to start flight school.

Knowing that one day I will be a pilot is humbling beyond words. I could not help but be flooded with emotions knowing that I will be leading these men and women who are willing to give their all to preserve what we value as the American way of life. To me, that is the greatest honor. Once again, thank you.

2. He Was a Regimental Commander in His Graduating Class of 950 Cadets & Finished Top of His Class in Physics

Idrache pictured with his girlfriend three days before graduation. (Instagram)

A West Point news release that was issued in the summer of 2015 said that Idrache had been appointed a Regimental Commander among the his fellow 950 cadets. That announcement gave his hometown as New Carrollton, Maryland, a suburb of Washington D.C. According to his sister, Idrache attended high school in Haitian capital of Port-au-Prince. She added that Idrache had finished top of his class in physics.

3. He Is Due to Report at Fort Rucker to Begin Flight School

In his Instagram thank you, Idrache mentioned that he is due to head to Fort Rucker in Alabama to start flight school. The base is named for Confederate General Edmund Rucker and has been the subject of a renaming debate. It is the home of Army Aviation and the United States Army Aviation Center of Excellence.

4. His Sister Works at the University of Maryland

Idrache’s sister Carina proves that her he isn’t the only success story in the family. (Facebook)

Idrache’s sister, Carina, works at the University of Maryland, according to online records. She works in student affairs. Carina Idrache is a graduate of Parkdale High School where she was awarded the Freedom Award in her senior year. According to her Facebook page, she is engaged.

5. This Picture Is in Stark Contrast to the Photo of a Female Cadet on Her Phone During Graduation Which Outraged Veterans

On May 23, West Point posted the above video showing a group of cadets performing the graduation march. The video quickly attracted the ire of the conservative media as one female student can be seen texting on her phone.

According to West Point, those cadets were marching to the Michie Stadium for the 218th United States Military Academy Graduation and Commissioning Ceremony. 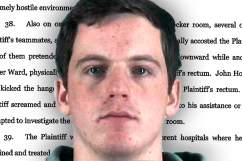