Bernie Sanders is hosting a rally in Stockton, California today, May 10. You can watch the rally on livestream above. The rally will be held at the Weber Point Event Center. Doors to the rally will open at 7 a.m. local time, but livestreams typically don’t start at the same time that doors open. The livestreams may also have a full replay of Bernie Sanders’ speech after the event is over.

What time is the livestream? Although Sanders’ campaign hasn’t stated a specific time that Sanders will start speaking, the rally livestreams typically begin two to three hours after the doors open. According to the countdown in the video above, the livestream will be starting around 10 a.m. Eastern. However, last night this livestream’s countdown was as little off and Bernie’s speech actually started an hour later than the countdown indicated.

Here’s another livestream below, which is showing an encore of Bernie’s rally in Sacramento until the rally in Stockton starts. If neither livestream works, you can also check Bernie2016tv’s livestream uploads at this link. They typically add a livestream for each of his rallies a little closer to the start of the event. They also have a great selection of full videos from his last week of rallies.

If you plan to attend in person, the event is free but you’re asked to RSVP online if possible. Don’t bring bags and limit what you carry to small, personal items for security reasons. Security won’t allow in weapons, sharp objects, chairs, signs or banners on sticks. People will be allowed inside on a first-come, first-served basis, so get there early if you plan on attending.

On-street parking is limited, but additional parking is available in the parking garages nearby. Carpooling and public transportation is also encouraged.

California is excited for Bernie Sanders. He held a rally in Sacramento last night and an estimated 21,000 people attended. You can see photos and read stories from people who attended in this article.

Sanders is scheduled to hold another rally later today in Salem, Oregon, at 4 p.m. local time. 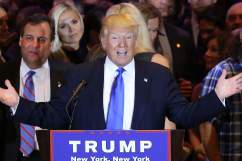 Loading more stories
wpDiscuz
0
0
Would love your thoughts, please comment.x
()
x
| Reply
Watch Bernie Sanders' rally in Stockton, California Weber Event Center live, here, for free. Find out what time the CA rally will be and how to watch it.