Bernie Sanders' rally in Vallejo, California was marked by one of his most inspiring speeches yet, according to supporters who attended. Multiple people commented on social media with messages like "This speech was the best I've heard him give!" Those in attendance said it looked like 20,000 people were there, but the officials numbers haven't yet been released. But in the words of his supporters, the rally was "yuuuuuuge!" Bernie spoke to thousands of excited activists and voters as the sun set over the horizon. People arrived hours early just to make sure they could get a good spot at the park. Click through the gallery to see more photos of Bernie's Vallejo, CA rally at Waterfront Park, shared by people who were there. (Facebook/Andre Wiken) 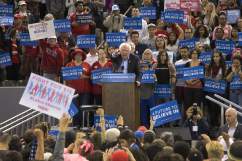