Deonne Dickerson, the father of the boy who fell into the gorilla enclosure at the Cincinnati Zoo. (Facebook)

The father of the 3-year-old boy who fell into the gorilla enclosure at the Cincinnati Zoo has been identified as Deonne Dickerson, a 36-year-old Cincinnati man.

Dickerson and Michelle Gregg, the boy’s mother, have four children together.

Harambe, a 17-year-old western lowland silverback gorilla, was killed after dragging the boy through a moat inside the exhibit.

“The Zoo security team’s quick response saved the child’s life. We are all devastated that this tragic accident resulted in the death of a critically-endangered gorilla,” Zoo Director Thane Maynard said in a statement. “This is a huge loss for the Zoo family and the gorilla population worldwide.”

On June 6, Hamilton County Prosecutor Joe Deters announced no criminal charges would be filed against Gregg, following a police investigation.

1. The Boy & His Siblings Were at the Zoo With Their Mother, but It Does Not Appear That Dickerson Was There

Videos of the incident were recorded by a bystander and posted on social media. The videos show the 400-pound gorilla grabbing the 3-year-old boy and dragging him through a moat area. He then stops and stands over the boy, before dragging him further into the enclosure.

During one part of the video, which you can watch below, Michelle Gregg can be heard talking to her crying son and saying “Oh God, please protect him,” while panicked zoo visitors call for help.

In another part of the video, she can be heard saying, “Mommy’s right here,” and “mommy loves you.”

Kim O’Connor, who recorded video of the incident, said it appeared the gorilla was trying to protect the child.

“I don’t know if the screaming did it or too many people hanging on the edge, if he thought we were coming in, but then he pulled the boy down away further from the big group,” Kim O’Connor told WLWT-TV.

Cincinnati Fire Chief Marc Monahan said in a statement to NBC News that the gorilla was seen “violently dragging and throwing the child.”

He said the gorilla was “neutralized” by a Cincinnati Zoo employe with one shot from a long rifle.
Michelle Gregg broke her silence in a Facebook post on Sunday. She has since deleted the post and her Facebook profile after receiving backlash. You can read the post below:

Her family also released a statement through a public relations firm.

“We are so thankful to the Lord that our child is safe. He is home and doing just fine. We extend our heartfelt thanks for the quick action by the Cincinnati Zoo staff,” the statement from Gail Myers Public Relations said. “We know that this was a very difficult decision for them, and that they are grieving the loss of their gorilla. We hope that you will respect our privacy at this time.”

2. The Father of 6 Has a Criminal Record but Appears to Have Turned His Life Around

Deonne Dickerson does have a criminal record, as first reported by the Daily Mail.

He has convictions for burglary, gun offenses, drug trafficking, criminal trespass, disorderly conduct and kidnapping, and spent at least one year in prison as a result of the drug charges. He was last arrested in 2006 and many of the crimes occurred in the late 1990s, when he was in his teens and 20s.

Dickerson’s now-deleted Facebook page tells the story of a man who has turned his life around. He is seen in several photos and videos with his children and Michelle Gregg. He is also pictured often at work.

According to his Facebook page, Dickerson has six children, including four with Gregg. He is originally from Cleveland, and went to Cuyahoga Community College. He has also lived in Atlanta.

Dickerson works as a sorter at an industrial equipment supplier in Cincinnati.

Many on social media have criticized the Daily Mail and Fox News’ “Fox and Friends” for highlighting Dickerson’s criminal record, when he was not even at the zoo.

Why is the father's criminal record a topic?? They should be more worried about the zoo making it's enclosures more safe

So Harambe dies and the media 1) Calls the mom neglectful 2) brings up the dad's criminal record. YO, FYI, THEY AIN'T SHOOT THE DAMN GORILLA

Kid falls into pit with gorilla.

On “Fox and Friends,” the show’s host’s didn’t mention that Dickerson has turned his life around, according to Raw Story. 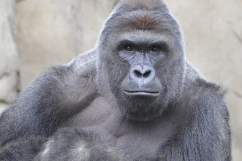 3. The Boy’s Mother, Michelle Gregg, Is a Daycare Administrator in Cincinnati

The Cincinnati preschool where Michelle Gregg works, Little Blossoms Academy, was overwhelmed with angry Facebook messages and posts on its page after her name was made public.

The preschool, where Gregg is an administrator, according to Ohio records, wrote, “On behalf of the Little Blossoms Academy, we feel it is appropriate for us to remove comments or images posted to this page that in any way reference Michelle Gregg, her child, or the recent horrible incident that occurred at the Cincinnati Zoo.”

Read more about Michelle Gregg at the link below:

4. The Mother of One of His Other Son’s Says He’s a Good Father

The mother of one of Dickerson’s other children, his other son, spoke out on Facebook, saying Dickerson and Gregg are both good parents. She also shared what she heard about the incident.

In the comments on the post, the woman wrote what Gregg told her about the incident:

The woman also said she talked to the boy on the phone and he said he wants to go back to the zoo. 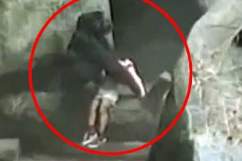 WATCH: Gorillas Protect Boys Who Fell in Other Incidents

5. Thousands Have Called for the Boy’s Parents to Be Held Accountable & Police Say They Are Investigting for Possible Criminal Charges

Cincinnati Police issued a statement Tuesday, saying its Personal Crimes Unit is “closely reviewing the facts and circumstances that led to a four-year-old boy falling into the Gorilla World enclosure.”

The police statement said “this review is only regarding the actions of the parents/family that led up to the incident and not related to the operation and safety of the Cincinnati Zoo.”

Police said anyone who witnessed the incident, has video recordings, or has any additional information should call the Criminal Investigations Section at 513-352-3542.

After a week-long investigation, Hamilton County Prosecutor Joe Deters announced no charges would be filed, saying Gregg “did not act in any way” to put her 3-year-old son, Isaiah, in harms way. The boy was hospitalized with serious injuries, but was sent home to recover a day after the May 28 incident.

Prosecutor: Mother at Cincinnati zoo "did not act in any way" to expose 3-year-old to harm https://t.co/IrievZRTux https://t.co/O1O1oWWMrE

Many outraged animal lovers have taken to social media to express outrage toward the boy’s parents, saying they are to blame for Harambe’s death by letting the 3-year-old fall into the enclosure.

“The little boy himself had already been talking about wanting to…get in the water. The mother’s like ‘No, you’re not, you’re not,’” witness Kim O’Connor told the New York Daily News.

It was completely unnecessary to kill Harambe. He was only trying to protect the child which the parents obviously failed to do. #RIPHarambe

So lazy parents can't control their wild kids and a beautiful endangered animal gets shot and killed because of it? #harambe #RIPHARAMBE

this whole thing disgusts me. when will innocent animals stop dying at the hands of negligent parents? #Harambe #CincinnatiZoo

Many have said the gorilla should not have been shot, saying it appeared in the video that the gorilla was holding the boy’s hand and comforting him, and not trying to harm him. The zoo said the boy’s life was in danger, and a tranquilizer would have taken too long to have an effect on the large gorilla, and could have made him more agitated.

A Facebook group, “Justice for Harambe” was created on Sunday. A Change.org petition also calling for justice for the gorilla has garnered more than 168,000 signatures from people calling for the boy’s parents to be held responsible:

Another petition calling for Child Protective Services to investigate the mother has received more than 50,000 signatures.

Cincinnati Police have not charged the mother, but said prosecutors could choose to indict her. The prosecutor’s office said the police investigation will be continuing.

Read More
5 Fast Facts, Animals, Breaking News, Cincinnati, Ohio
wpDiscuz
39
0
Would love your thoughts, please comment.x
()
x
| Reply
Deonne Dickerson is the father of the 3-year-old boy who fell into the gorilla enclosure at the Cincinnati Zoo, leading to the fatal shooting of Harambe.