A massive tornado was spotted on the ground in Wynnewood, Oklahoma and may have left a trail of destruction in its wake. According to Breaking 911, a second large tornado may have also been forming in Wynnewood. So far it’s not known how many injuries resulted from the tornado. ABC News reported that at least one person died, an elderly man near Wynnewood. A tornado also hit in Elmore City, and reports are that multiple homes were destroyed, according to WCIA3. More tornadoes have been spotted in Oklahoma beyond the one in Wynnewood, and reports are still coming in. The first video, posted above, shows just how massive the tornado was near Wynnewood, OK. You can see debris from the twister as it passes.

These are videos from people in the region where the tornado hit:

And although not a video, this photo is incredibly terrifying:

Here’s another video showing the immense size and strength of the tornado:

And this video was shared on Twitter by Chad Hugghins of the Davis tornado as it crossed the highway:

The Davis, Oklahoma tornado crossing the highway we just drove down. pic.twitter.com/VQS2kecxb0

Here is another video of the massive tornado in Wynnewood:

Texas Storm Chasers shared this video of a tornado approaching I-35 near Wynnewood. You can see the debris swirling in the storm:

And KMOV shared this video of the tornado that would eventually grow to be a mile wide in Wynnewood:

To see photos of the tornadoes, please visit:

You can see more tornado photos and videos here: 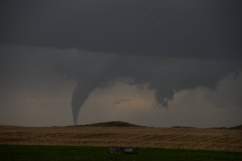 Wray, Colorado Tornado: The Videos You Need to See

Read More
Breaking News, Severe Weather
A massive tornado touched down near Wynnewood, Oklahoma. These are the videos you need to see from May 9 tornadoes in Davis, Elmore, and more.