President Barack Obama addressed Rutgers University graduates Sunday at their commencement in New Jersey, telling them “throughout our history a new generation of Americans has reached up and bent the arc of history in the direction of more freedom and more opportunity and more justice. And Class of 2016, it is your turn now, to shape our nation’s destiny, as well as your own. So get to work, make sure the next 250 years are better than the last.”

You can watch his full speech below. The president is announced at the 20-minute mark of the video, and his address begins at 44 minutes.

The commencement ceremony was the largest in the school’s history.

“It’s a recognition of the 250 years that Rutgers has been in existence,” university archivist Thomas Frusciano told NJ.com. “It’s an acknowledgement by the chief executive.”

Obama became the first sitting president to speak at a Rutgers graduation.

The president spoke at Howard University’s commencement on May 7. He will also speak at the U.S. Air Force Academy’s graduation in June. 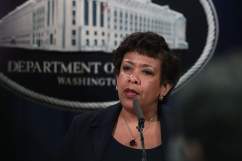