A few days after Bill Kristol teased that a third party candidate with a real chance of winning would challenge Donald Trump, this mystery person was finally revealed.

According to Bloomberg, Kristol was talking about David French, a conservative lawyer and National Review writer who he hopes will enter the 2016 election as an independent.

Via text msg, Kristol tells WaPo that French's campaign, if launched, could be like "Jim Buckley 1970" on a nat'l scale

On Twitter, Mitt Romney flirted with the idea of endorsing French, calling him intelligent and patriotic. Romney is one of the few remaining prominent republicans who has not yet backed Donald Trump, and so in theory David French could be a solid alternative for these conservatives who feel Trump does not represent their values.

Is Kristol right that this guy actually has a shot in the general election? Has French reached a decision about running? Here are five facts you need to know about David French.

1. He Writes for National Review

David French is currently a staff writer for National Review, the conservative media outlet that in January published a special “Against Trump” issue.

He has been quite vocal in his hatred for Trump in his National Review pieces, but most interesting is the fact that just last week, he called on Mitt Romney to run as a third-party candidate.

“And at this point, Mitt Romney is the only man who combines the integrity, financial resources, name recognition, and broad public support to make a realistic independent run at the presidency,” he wrote at the time. “He’s conservative, he’s got an enviable record in business and government, and he’s demonstrated a unique capacity for turning around failing enterprises.”

His coworkers at National Review apparently think he’d be a good fit for president, as his colleague, Jim Geraghty, posted on Twitter last week, “DAVID FRENCH FOR PRESIDENT 2016!”

David French is also a veteran of the Iraq war, serving in the Diyala Province and eventually earning a Bronze Star.

French says he was inspired to join the army after reading a newspaper article about a wounded soldier who was the same age as him. He said, “How was this man any different than me? Why was it right for him to sacrifice and not me?”

When working as an attorney, he concentrates in part on the law of armed conflict, and he also wrote a book on terrorism. In Rise of ISIS: A Threat We Can’t Ignore, French explains the origins of the terrorist group and argues that if they are not swiftly dealt with, they could unleash a genocide upon the world.

French is very much against having women in combat, writing for National Review that this would put lives in danger.

“Our enemies don’t care one bit for political correctness,” he wrote. “They won’t treat mixed-gender units with kid gloves. They’ll exploit those units’ perceived weakness mercilessly, concentrating their fire on the slow and vulnerable.”

3. He and His Wife are Adoption Advocates

French’s daughter is Naomi, a young girl from Ethiopia who he discusses in a piece on National Review as being one of the best decisions he has made. He and his wife Nancy are prominent advocates of adoption.

For those who have not adopted, it’s difficult to fully communicate the immediate intensity of the connection,” he wrote. “I remember looking at her sleeping in her crib the night we arrived back in America and feeling indescribably blessed — the same feeling I had with our older, biological kids (just with more jet lag). And she is one incredible, joy-filled little girl. We grow more thankful for Naomi every day. She is the light of our lives, and we pray every night for the strength and wisdom to be the parents God intends for us to be.”

David and Nancy were actually in the process of adopting Naomi while David was in Iraq, and they later discovered that she was born on the same day he was deployed, which they both took as a sign from God, according to CBN.

4. His Wife Is Bristol Palin’s Ghostwriter

David French’s wife is Nancy French, a prominent author who ghostwrites biographies for a variety of celebrities. One of the books she ghostwrote was Home and Away: A Story of Family in a Time of War by Bristol Palin, and French told Politico that for a full month she slept in a building near the Palin family home and was given a seat at their dinner table.

“Sarah [Palin] seemed to me like a really good mother,” French said. “I loved seeing her and Todd fussing over Trig, kissing him and playing with him on the floor.”

In addition, French says her experience as an army wife helped her connect with Bristol Palin. She has also ghostwritten material for Stacey Dash, Shawn Johnson, and Sarah Palin.

French is quite active on Twitter, and she recently retweeted this post from Bill Kristol about trying to find an independent candidate.

“Hopefully I'll find a name I can support. If not I'll write in a name.” @RepMikePompeo @DavidAFrench…@MittRomney https://t.co/ojQmYRN2pv

5. He Will Not Run for President

Bloomberg Politics noted in their report that David French was open to running as a third-party candidate, but he had not yet formally reached a decision.

Since then, however, French has decided he will not run. The announcement was made in a piece for National Review, where French says he did indeed think long and hard about launching an independent bid.

“But given the timing, the best chance for success goes to a person who either is extraordinarily wealthy (or has immediate access to extraordinary wealth) or is a transformational political talent,” he wrote. “I’m grateful for the opportunity to serve my country, and I thank God for the successes I’ve had as a lawyer and a writer, but it is plain to me that I’m not the right person for this effort.” 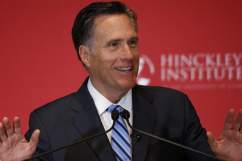 Read More
2016 Presidential Election, 5 Fast Facts, Politics
Follow Heavy ↓
Discuss on Facebook
David French may be entering the 2016 race as an independent. Here is everything you need to know about him and his family.