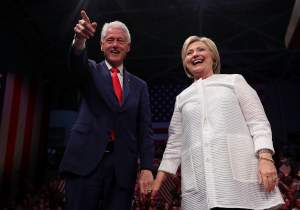 Hillary Clinton looks to be the presumptive nominee for the Democratic party. (Getty)

The eyes of the political world are on California today. Both the Democratic and GOP parties are holding primaries in the Golden State. Keep it here for live updates on the results as soon they are released. The California polls will close at 11 p.m. Eastern.

California is one of six states hosting Democratic nominating events on June 7. On the Republican side, it is one of five states.

The Democratic primary has drawn more attention given Donald Trump is the presumptive Republican nominee. The Democratic party has had a bit of controversy after the AP reported Clinton had reached the number of needed delegates to secure the nomination prior to the June 7 primaries. The report included superdelegates who cannot officially vote until July’s convention.

Bernie Sanders issued a statement refuting the report. “Secretary Clinton does not have and will not have the requisite number of pledged delegates to secure the nomination. She will be dependent on superdelegates who do not vote until July 25 and who can change their minds between now and then,” Sanders noted in the statement.

Trump is expected to officially reach the 1,237 needed delegates to secure the nomination tonight. According to FiveThirtyEight, he enters the day with 1,144 delegates.

The early polling numbers have showed Sanders has narrowed Clinton’s lead. The most recent polls show Clinton with just a two percentage point lead in California.

Keep it here throughout the night for live updates on the California results as soon as they are released.

The following data is courtesy of CNN with 69% reporting. Hillary Clinton is the winner of California.

The following data is courtesy of CNN with 61% reporting. Donald Trump is the winner of California. 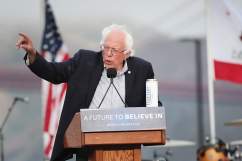 Loading more stories
wpDiscuz
0
0
Would love your thoughts, please comment.x
()
x
| Reply
Both the Democratic and Republican parties have a California primary . Heavy will have live results of both primaries.