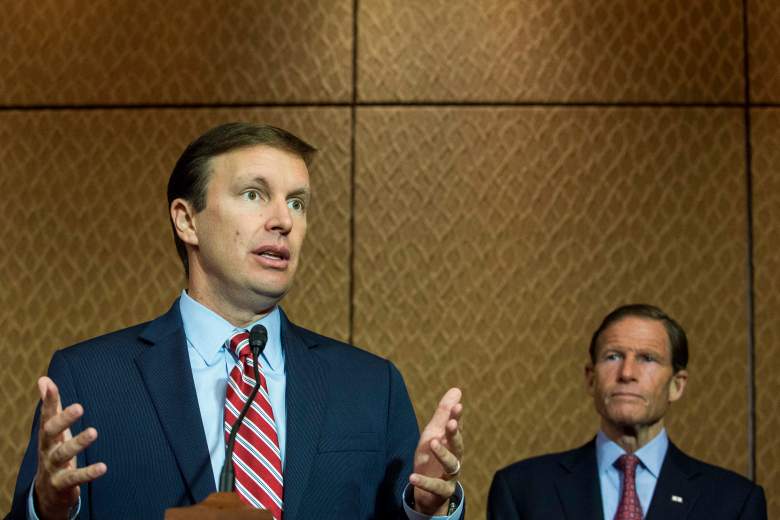 Senator Chris Murphy, with Senator Richard Blumenthal behind him in July 2015 (Getty)

Connecticut Senator Chris Murphy has taken on the gun control issue head on since he represents the state were the 2012 Sandy Hook Elementary School shooting took place. On Wednesday, Murphy and other Democrats took to the Senate floor to filibuster and demand new gun control measures after the massacre in Orlando at a gay nightclub left 49 people dead. One law the Democrats are hoping to push through is a ban on selling firearms to suspected terrorists.

Despite the filibuster, the Senate failed to pass any gun measures after the Orlando nightclub shooting.

Here’s a look at Murphy’s career and his gun control activism.

1. He Called Out Congress’ ‘Intentional Silence’ on Gun Control

Not again. My heart breaks for Orlando, the families and the friends and the wounded.

Congress's heartless, intentional silence has become a quiet message of endorsement to would be shooters contemplating mass murder.

Murphy, 42, typically takes to Twitter to express his opinions on gun control. After news broke of the shooting in Orlando, he said Congress’ “heartless, intentional silence” on gun control laws are a “quiet message of endorsement” to shooters.

On Monday, he asked why terrorists are able to get a hold of assault rifles, but cannot fly when they get on the no-fly list.

Assault rifles are now the weapon of choice for would-be terrorists. Why are we intentionally arming the enemy w military grade weapons?

Those with ties to terrorists can't fly on a plane but can walk into a gun store and buy dozens of guns, hundreds of rounds of ammo. Why?

In December 2014, after the San Bernardino shootings, Murphy posted his most famous tweet. It was retweeted over 23,000 times.

Your "thoughts" should be about steps to take to stop this carnage. Your "prayers" should be for forgiveness if you do nothing – again. 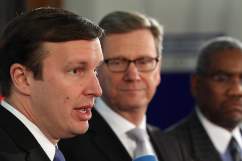 How Long Was the Filibuster for Gun Control?

2. Murphy Criticized the NRA During His First Month in Office 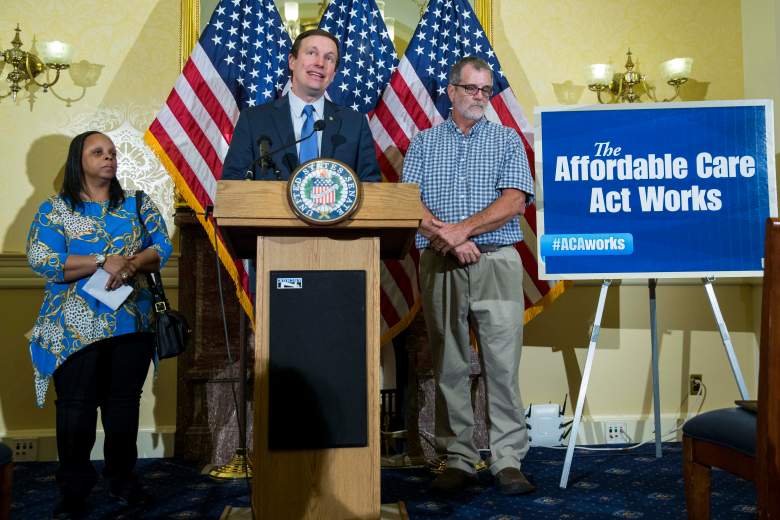 In January 2013, just days after coming into office, Murphy blasted the National Rifle Association for releasing a shooting game that was available on the Apple App store.

The NRA seems intent on continuing to insult the families of the victims of Sandy Hook,” Murphy said in a statement at the time. “How could they think it was a good idea to use the one month anniversary of the tragedy at Sandy Hook to release a game that teaches four year olds to shoot assault weapons? No matter what outrageous new tool they use, the NRA cannot make a straight-faced case that sport shooters need military-style weapons to enjoy their hobby.”

The NRA has responded to Murphy’s calls for gun control by giving him an “F” rating. Murphy’s colleague from Connecticut, Richard Blumenthal, also got an “F.”

3. Murphy’s First Speech in the Senate was About a Sandy Hook Victim 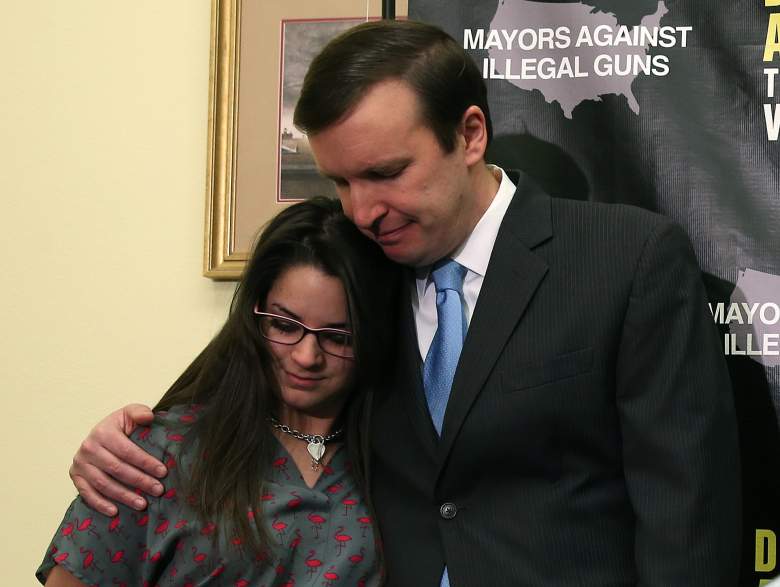 Murphy with Carlee Soto, whose sister was one of the teachers killed during the Sandy Hook shooting. (Getty)

Murphy’s first speech on the Senate floor came in April 2013 and it was about Anne Marie Murphy, a Sandy Hook teacher who was killed during the shooting, with a 6-year-old autistic student in her arms.

“That morning, I read it aloud in my office by myself and I cried,” Murphy told The New York Times. “I made it through, barely, on the floor. I’m not an overly emotional guy, but I’ve been as emotional as I’ve ever been for the past four months.”

In that same interview, he said that he flew some Sandy Hook families to Washington to help stop a Republican filibuster. When he told them that they were in Washington to help him just to get a vote before a vote, it “was really heartbreaking and deflating for some of them. But they rose to the occasion, and it was wonderful to see them at the end of the trip feeling like they had made a difference.” 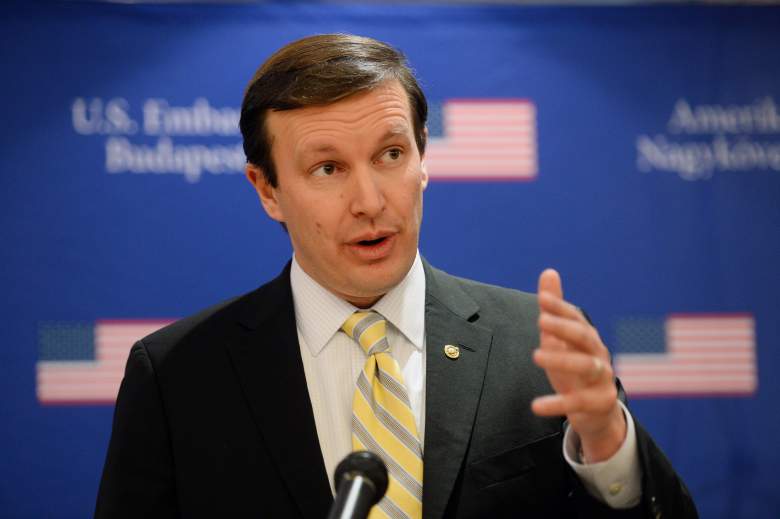 Murphy traveled to Budapest in January 2014 to meet with the Hungarian government. (Getty)

Gun control isn’t Murphy’s only cause. He is also trying to get the Mental Health Reform Act of 2016 passed. As WSHU reported in March, the families of two Sandy Hook victims joined Murphy in calling for this bill to be passed. If passed, the bill could give more coverage to mental health patients and train teachers and primary care providers on how to detect mental illness.

However, as The Hour reports, Murphy admitted that fixing the mental health issue will not help stop gun violence.

“I understand clearly there’s an intersection, but the failure of one system is not causal of the other crisis,” Murphy said at the Senate Mental Health Summit. “So I worry when people suggest that fixing the mental health problem will fix the gun violence problem.”

5. Murphy Is Being Considered a VP Nominee for Hillary Clinton 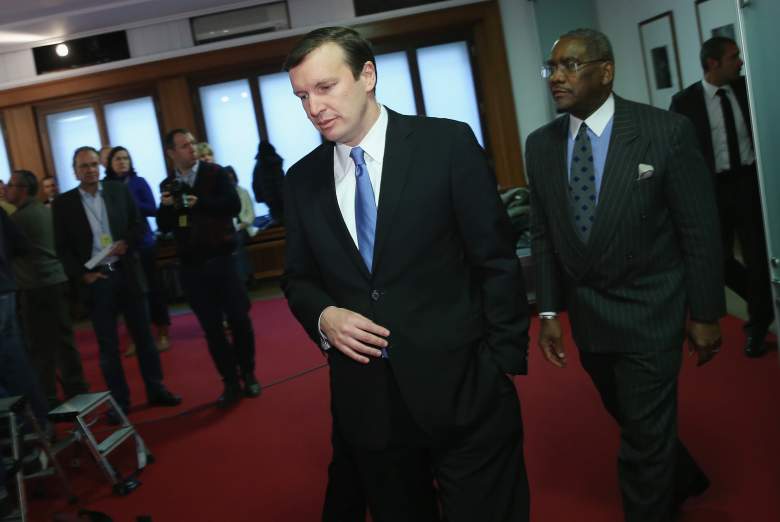 Murphy and Congressman Gregory Meeks in Berlin in November 2013 (Getty)

Although Murphy’s office hasn’t commented, a report from USA Today in May suggests that Murphy is on the short-list for potential vice president picks for Hillary Clinton.

As the Hartford Courant points out, Murphy is a young, rising star within the Democratic party. He was only 39 when elected to the Senate and 25 when he was elected to the state House in 1998. 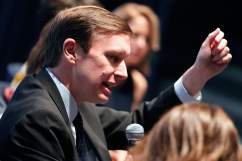 Loading more stories
wpDiscuz
1
0
Would love your thoughts, please comment.x
()
x
| Reply
Senator Chris Murphy, whose state was the site of the Sandy Hook school shooting, started a filibuster on the Senate floor over gun control after Orlando.