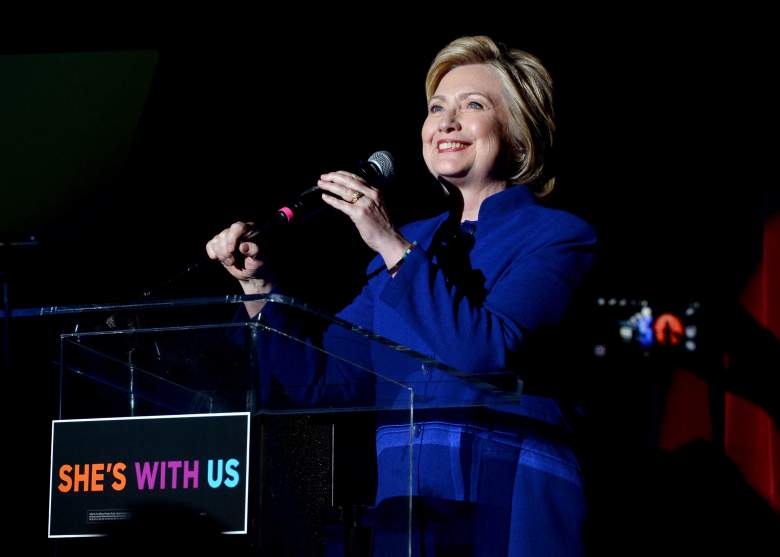 Hillary Clinton will become the first woman to top the presidential ticket of a major U.S. political party. (Getty)

Hillary Clinton strided into history on Tuesday as she secured enough delegates to become the presumptive Democratic nominee.

A former U.S. secretary of state, Clinton will be the first woman presidential candidate of a major U.S. political party.

With a win tonight in New Jersey, Clinton clinched 126 delegates putting her over the threshold of 2,383 needed for the presumptive nomination.

Democrats voted in six states on Tuesday, including California where polls are open until 8 p.m. PT.

On Monday night, the Associated Press said that Clinton had secured the support of enough superdelegates to clinch the Democratic presidential nomination when the party convenes at its July convention in Philadelphia.

Clinton campaign manager Robby Mook said they were pushing supporters to “stay at this” for the remaining primaries in New Jersey, Montana, North Dakota, South Dakota, New Mexico and California, where 694 delegates were at stake.

“We’re on the verge of making history, and we’re going to celebrate that tonight,” Mook told CNN on Tuesday morning. “There’s a lot of people we want to make sure turn out today. We do not want to send a message that anybody’s vote doesn’t count.”

As the primaries come to a close, Clinton wants to move beyond the battle with Bernie Sanders and turn her attention to presumptive Republican nominee Donald Trump and the Nov. 8 election.

According to CNN, Clinton’s campaign is planning a major push to unify the Democratic Party behind her candidacy, including endorsements from President Obama and Vice President Joe Biden which could happen as early as this week.

However, Sanders has yet to concede. As recently as Saturday, he vowed to continue the fight all the way to the convention.

Loading more stories
wpDiscuz
1
0
Would love your thoughts, please comment.x
()
x
| Reply
With a primary win tonight in New Jersey, Hillary Clinton clinched 126 delegates putting her over the threshold of 2,383 needed for the Democratic presumptive nomination.