Presumptive Republican presidential nominee Donald Trump is scheduled to hold a rally this evening in Sacramento, California one week ahead of the state’s primary.

The event will be held at the Sacramento International Jet Center and will begin at 7:00 p.m. PST. It can be viewed online via the embedded YouTube video via Right Side Broadcasting. Trump typically takes the stage roughly a half-hour after the scheduled start time.

This will be Trump’s first rally since his San Diego event, which resulted in clashes between protesters and police and the arrest of at least 35 individuals. This is also his first event to be held in Sacramento.

Crowd estimates range from between 5,000 and 10,000 people, although the venue can only accommodate 2,500, according to KCRA. Massive delays are expected on Interstate 5.

Sacramento County Sheriff’s Sgt. Tony Turnbull said that law enforcement agencies are fully prepared for protests at the Sacramento rally, according to the Sacramento Bee.

Bernie Sanders will also be holding an event in Sacramento at roughly the same time as Trump; his rally at the University of California, Davis begins at 8 p.m. PST. 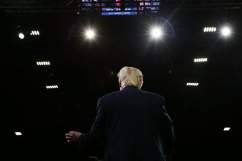