Hillary Clinton is speaking today at the Virginia Air and Space Center in Hampton, Virginia to discuss national security. Veterans, military families and other members of the defense community will be there, but it’s not open for the public. The speech is set to start at 11 a.m. ET.

“Clinton will again emphasize her plans to keep America safe while adhering to our nation’s guiding principles and values,” Clinton’s officce said in a statement. “At the event, Clinton will hear directly from a community uniquely impacted by national security decisions about what they are looking for in our next commander in chief.”

This is Clinton’s third speech since the mass shooting in Orlando. In a speech yesterday in Pittsburgh, Clinton attacked Donald Trump’s “demonstrably lies,” adding that, “But he feels compelled to tell them because he has to distract us from the fact he has nothing substantive to say for himself.”

Clinton was speaking at nearly the same time as President Barack Obama and the two both criticized Trump for telling them to use the words “radical Islam.”

“It was one thing when he was a reality TV personality, raising his arms and yelling ‘You’re fired!’ It is another thing altogether when it is the Republican party’s presumptive nominee for president,” Clinton said in Pittsburgh. “Americans, we don’t need conspiracy theories and pathological self-congratulations.” 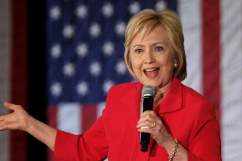