A gun shop owner heading to New York City to rescue a heroin-addicted teen from a drug den was arrested with two companions at the Holland Tunnel after a police officer stopped his truck for a cracked windshield and found a cache of weapons and ammunition.

John Cramsey made it his mission to save addicts after his daughter, Alexandria, died of a heroin overdose in February, starting a group called Enough Is Enough.

The traffic stop occurred on the New Jersey side of the Holland Tunnel about 7:40 a.m. Tuesday, the Port Authority police say.

The other two people arrested have been identified as Dean Smith, 53, and Kimberly Arendt, 29, both also Pennsylvania residents.

Cramsey, 50, is the owner of Higher Ground Tactical in Emmaus, Pennsylvania.

A friend, Michael McKenna wrote on Facebook that Smith and Cramsey were still in Port Authority lockup in Union, New Jersey, and would be moved to Hudson County later Tuesday night. McKenna said Smith went on the trip as a photojournalist and denied reports that anyone in the truck was high, saying they are against drugs. But police said they found marijuana, marijuana paraphernalia, a Valium pill and a Xanax pill in the truck.

Awaiting a hearing for John Cramsey, gun-toting bereaved father, and 2 others who wanted to "rescue" teen addict pic.twitter.com/qccBhdJydy

The trio remain in custody and are facing charges of unlawful possession of an assault rifle, a handgun and a shotgun, possession of high-capacity ammunition magazines, transportation of an assault rifle and transportation of high-capacity magazines. They had their first court appearance in Hudson County via video screen Wednesday afternoon and were returned to jail on $75,000 bail.

Here’s what you need to know about Cramsey:

1. Cramsey Says They Were Trying to Rescue a 16-Year-Old Who Was Scared After Her Friend Died of an Overdose

John Cramsey with Kimbery Arendt in his truck just about 30 minutes before they were arrested. (Facebook)

John Cramsey posted on Facebook about his mission just about 30 minutes before he was arrested, saying he was 11 miles away from the Queens hotel where he planned to rescue a 16-year-old Wilkes Barre, Pennsylvania-area girl. He said the girl had gone to the hotel for a party with friends.

“One of those friends she went up there with will not be returning,” Cramsey wrote. “Last night she woke to find her friends body next to her in the same bed were her friend died of another heroin overdose. … I’m bringing her out of NY today and anybody else in that hotel that wants to go home too.”

On Tuesday, Cramsey was stopped by Port Authority police before he reached Brooklyn.

A photo of John Cramsey from his Facebook page.

“Astute Port Authority Police work led to the stoppage of a vehicle on the New Jersey side of the Holland Tunnel this morning, leading to the arrest of three individuals from the state of Pennsylvania on a variety of charges related to illegal possession of guns and ammunition,” according to a statement from Joe Pentangelo, a Port Authority Police spokesman. “At this time, the investigation is continuing, but the agency does not believe the incident is terrorism-related.”

Police said the girl was found in Queens, but told police she didn’t need to be rescued.

Cramsey had said in Facebook posts that he had been contacted by her mother.

Dean Smith, who was accompanying Cramsey on the trip, is a graphic designer and magazine editor who was planning to take photos and video, according to Facebook posts. Police said Smith had a loaded handgun when he exited the vehicle.

Police Discover Loaded Weapons in NYC's Holland TunnelTwo Pennsylvania men, stopped for having a cracked windshield, were caught trying to bring rifles and handguns from New Jersey to New York.2016-06-22T00:01:58.000Z

Kim Arendt, who also goes by Kim Walker, the third person arrested, is a recovering addict herself who believed she was going along to help Cramsey, her mother told The Daily Beast.

She is the mother of an 8-year-old girl, did not own any guns, her mother said. Walker knew the girl they were trying to save, according to the New York Daily News.

Arendt knew the girl from a camp for troubled youths, where Arendt has worked as a counselor. She told investigators, “we were trying to save my girl,” according to the Daily News.

“She was high on heroin, she was asking Kim, she was asking for help to come back to the area,” Lyn Baker, the co-founder of Enough Is Enough, told the Daily News. “That young girl had reached out to her on the text. John said, ‘We can go get her.'”

Walker posted on Facebook before the trip, “Saving a life with a true hero.. Why? Because Enough is Enough.”

Cramsey has posted on Facebook about similar rescues in the past. He wrote about one on June 9:

Ok everyone.
Who feels like Kickin Some ASS this morning ?
I have a young lady in her early 20’s that skipped out of a Court Ordered Rehab in East Stroudsburg and found her way back to Allentown with another young lady from Philadelphia.
These girls were literally taken out of the Super 8 Motel on Airport Road in Allentown.
The young Lady from Philadelphia was not Court stipulated as a mandatory rehab and she has been returned to her home in Philadelphia in the late hours last night.
The other young lady is currently back out on the streets after getting out in the middle of the night and the Mother believes that she is right back at the same hotel again.
I am gearing up and going over there to get this girl out of the grasp of the demons that hold her but this place is infested with the Demons that sell this crap and trap our kids Souls forever.
I Plan on making a statement here people.
This is NOT Acceptable on my watch.
Not with my kids.
Not in my Town.
Not anymore….

He posted another story along with photos showing him in his truck with a rifle:

On June 12, he wrote, “Who else out there is ready to show these Dealers of Death that we are Madder than HELL and we’re NOT GUNNA TAKE IT NO MORE ! … Enjoy your Day F**kers….. Cause I’m about to F**k UP Your Night ! Me and who’s Army ? Y’all just Stay Tuned and I’ll Introduce you to them later on.”

He also posted on June 10 that he had heard there was a bounty on his head:

Cramsey has also held rallies to speak out against the dangers of drug use, according to his Facebook page.

Lyn Baker, the co-founder of the Enough Is Enough group, told the New York Daily News she and Cramsey help get people into treatment for addiction.

“He’d be the spotlight person,” she told the Daily News. “He’s very charismatic, always has the right words to say. I would be the one to do placement.”

Baker explained on Facebook that she usually handled the behind the scenes work, while Cramsey carried out the rescues.

She told The Daily Beast she is just a housewife trying to help people with addictions, and a lawyer friend told her she is also likely to face investigation.

“About a week ago, he started posting very cryptic posts,” she said. “He felt like he was superman, like he could go and save these people. And I had told him I was stepping away from the group.” 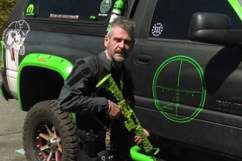 Police said they seized a shotgun, an AR-15 style rifle and handguns, along with goggles, tactical gear, ammunition and knives, according to NBC New York. An ammo-box labelled “Shoot your local heroin dealer” and a bag with the label “firearms instructor” were also in the vehicle, photos released by the Port Authority show. Other tactical gear had the word “police” written on it. One of the gun magazines seized had the word “’merica” on it and another said “United We Stand.”

You can see the truck in a police impound lot below:

Cramsey had posted photos with the truck and weapons on his Facebook page prior to his arrest.

It is illegal to transport loaded weapons in New York and New Jersey. But it does appear that the weapons were legally owned in Pennsylvania. The two men, Cramsey and Smith, had permits to carry in their home state.

A friend, John Berthel, told The Daily Beast that it is legal to drive around Lehigh Valley, Pennsylvania, with weapons, and Cramsey made a mistake by taking them across state lines.

“He’s a great guy. He’s the type to give the shirt off his back to anyone,” Berthel said. “He was in a rush to help somebody, to do good.” 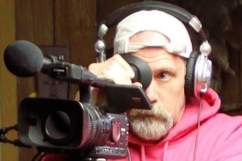 4. He Was Arrested on the 4-Month Anniversary of His Daughter’s Overdose Death

John Cramsey was arrested on the four-month anniversary of the death of his daughter, Alexandria “Lexii” Cramsey, a 20-year-old model who overdosed on heroin on February 21. He wrote about the pain of losing his daughter in an early morning Facebook post on Tuesday, just hours before his arrest:

According to her obituary, Alexandria Cramsey worked as a professional model for three different agencies, in Atlanta, Philadelphia and Mexico, and also was a ballet dancer.

Cramsey spoke about losing his daughter and his ballet against heroin in March 2016 at a forum in Allentwn:

Her 22-year-old boyfriend also died of a heroin overdose that same week. Cramsey spoke out about addiction at a public meeting in April, according to The Morning Call.

“They’re selling poison,” Cramsey said of drug dealers, while pleading with the panel for help in fighting heroin in his community.

Kimberly Arendt Photos: Pictures of Woman From Enough Is Enough

5. He Opened the Higher Ground Tactical Gun Range in 2014

John Cramsey opened the Higher Ground Tactical gun range in 2014. A video from December of that year shows Cramsey inside his gun range firing a gun:

He is a Zionsville, Pennsylvania, resident originally from Allentown, according to his Facebook page.

He appears to be active in local groups supporting veterans, including the Sons of the American Legion, according to his Facebook page. Last year, he started a GoFundMe fundraiser to help save a veteran’s home.

Cramsey’s gun store was recently fined $135,000 by OSHA for exposing workers to lead and noise levels above the permissible limits, according to The Morning Call.

Read More
5 Fast Facts, Breaking News, Crime, New Jersey, New York, Pennsylvania, Police
A Pennsylvania gun store owner whose daughter died of a heroin overdose was arrested at the Holland Tunnel with two other people and a cache of guns.