Hillary Clinton will be in Columbus on Tuesday, where she plans to deliver a speech on the economic choice voters face in November. She will discuss her “vision for an America that is stronger together and her commitment to build an economy that works for everyone, not just those at the top,” according to her campaign website.

The economy is a top concern for voters. A recent Gallup poll shows that voters believe Trump would be the best economist-in-chief by a margin of 53% to 43%.

Ohio is a critical swing state. Her campaign will seek to address two crucial issues: convincing the middle class that Clinton cares about their interests as much as Bernie Sanders, and that she can improve the economy more than Donald Trump.

Larry Sabato, an expert on U.S. politics who is director of the University of Virginia’s Center of Politics told CNN, Clinton should talk about how she’ll boost American wages.

She should “outline the way she wants to strengthen wages for the middle class. That’s at the heart of much of Trump and Sanders support,” said Sabato.

Clinton also plans to attack Trump in Tuesday’s speech. She’s expected to emphasize how his policies could send the U.S. into a recession.

Introduced by Sen. Sherrod Brown, Clinton made a speech in which she urged Americans to unify and to support gun control and an “intelligence surge.” 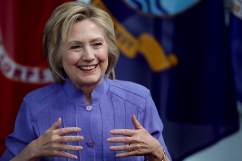 When & Where is Hillary Clinton’s Next Rally?

Read More
Hillary Clinton, Politics
Follow Heavy ↓
wpDiscuz
1
0
Would love your thoughts, please comment.x
()
x
| Reply
Hillary Clinton will be in Columbus on Tuesday, where she will deliver a speech on the economic choice voters face in November. Watch a live stream of her speech here.