Donald Trump is scheduled to hold a rally in Tampa, Florida this morning, The event will begin at 11:00 a.m. Eastern, and it can be streamed in the embedded YouTube player via Right Side Broadcasting.

Trump’s previous event in Tampa attracted roughly 10,000 people back in February. It should be interesting to keep track of the attendance for today’s rally, as an event Trump held in Richmond yesterday had a surprisingly low turnout.

Tampa Mayor Bob Buckhorn says the city is fully prepared for any protests.

“I worry more about which ethnic group he’s going to insult than I do about what’s going to happen outside,” Buckhorn said. “We’ll deal with what goes on outside. We’re good at it. We have a lot of practice with it, so we’ll be prepared.” 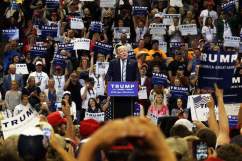 When & Where Is Donald Trump’s Next Rally?