Former Palm Beach Gardens, Florida, police officer Nouman Raja has been charged in the fatal shooting of Corey Jones, who was waiting for a tow truck on the side of the road.

Jones, 31, was killed in October 2015. Raja, 38, was fired in November and is now facing charges of manslaughter and attempted first-degree murder.

The charges were announced by Dave Aronberg, the State Attorney for the 15th Judicial Circuit, on June 1. The arrest came after a lengthy investigation by the Palm Beach County Sheriff’s Office.

Raja was “on duty in a plain clothes capacity, in an unmarked police vehicle,” before the shooting. He “stopped to investigate what he believed to be an abandoned vehicle on the southbound exit ramp of Interstate 95,” and PGA Boulevard, police said.

Jones was armed with a legal handgun and did not fire during the incident. Investigators say he may not have known Raja was a police officer. Raja was not wearing a tactical vest and did not identify himself as an officer, according to court documents. He also left his police-issued radio and gun in the undercover van he was driving when he pulled up to Jones. He shot Jones with his personal gun.

Investigators say Jones was on the phone with roadside assistance when he was shot. A recording captured the interaction between Jones and Raja, and the shooting. Here is a transcript of the conversation:

You can read the probable cause affidavit below:

Jones’ family released a statement after the arrest:

We were relieved to learn that Officer Nouman Raja, who senselessly killed Corey Jones, was arrested earlier today and will face criminal charges for his reckless act. While we understand that nothing can bring back our son, brother and friend, this arrest sends a message that this conduct will not be tolerated from members of law enforcement.

Our goal now as a family is to ensure that this never happens to another innocent citizen. In spite of this news, our hearts are heavy. We lost a wonderful soul. But rather than focus on the reprehensible actions of one police officer, today we choose to celebrate Corey’s life. A life which he lived to the fullest, every day. We take solace in the outpouring with of support from the people who knew Corey best. His spirit will live on through his music and the lives he touched over the years. We will stay vigilant as this process moves forward and peacefully demand greater accountability and transparency from law enforcement.

Jones was a well-known musician and worked as an inspector and assistant property manager for the Delray Beach Housing Authority, according to its website.

Read more about Raja and Jones at the links below: 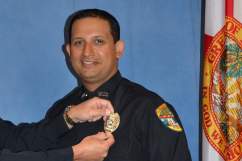