A 41-year-old man is accused of shooting his wife of nine days dead with a high-velocity crossbow in their Philadelphia home while naked, police say.

The arrow went through the victim’s body and the chair she was sitting in, before sticking in the wall, police said. Kuzan was arrested at the scene.

1. Paul Kuzan Was Yelling ‘She’s Evil! She’s the Devil!’ After Running Out of His House Naked

Paul Kuzan, who was naked, was standing in his doorway after shooting Pamela Nightlinger with the crossbow, yelling “she’s evil,” and “she’s the devil,” neighbor Margie Maldonado told Philly.com.

Nightlinger was able to get out of the home for help, collapsing into the arms of Maldonado’s 24-year-old son after stumbling to their neighboring house. Maldonado said Nightlinger was gasping for air and blood was everywhere. She said that was when she saw Kuzan in his doorway yelling, before going back into the house like nothing happened.

Nightlinger was taken to a local hospital and was pronounced dead about 10:30 p.m. Sunday, about an hour after the shooting.

“He went and got his crossbow. He loaded it. She was sitting in a chair. He fired one time,” Philadelphia Police Captain James Clark told WPVI-TV.

“She was sitting in a chair, the (arrow) actually went through her body, through the chair, and got stuck into the wall,” Clark told Philly.com. “It was a very high-velocity bow.” 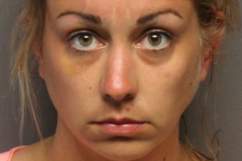 2. He Walked Into a Nearby Mixed Martial Arts Gym & Tried to Enter a Daycare While Naked a Week Before the Murder, Neighbors Say

Neighbors said Kuzan had recently shown bizarre behavior, including walking naked into a nearby mixed martial arts gym, Philly.com reports. A daycare owner said Kuzan then tried to get into her building.

“He said he was going to kill everyone and not even the kids would be safe,” Anointed Hands Child Development Center owner Christina Humphrey told Philly.com. “I was horrified.”

The incident occurred about a week before the shooting. He was brought back to his house by his wife, Humphrey told the news website.

“He was completely exposed,” neighbor Sean Thompson told WPVI-TV. “A woman we thought was his sister – now we know, wife – came out with a robe and said he didn’t take his medication.”

3. She Posted About Their Wedding on Facebook Just Days Before She Was Killed

Pamela Nightlinger, who had not yet legally changed her name to Kuzan, posted on Facebook about her marriage to Paul Kuzan on June 17, just nine days before the shooting. She received several congratulatory messages from friends.

“Did you guys really get married?? About time. It’s always was meant to be,” ODonnell Griffin Kelly wrote.

Another friend, Claire Fields Doroshenko, wrote, “Woo-hoo! Congrats! May you be blessed with years of luv & happiness! Ox”

Daniel Ferry wrote, “I’m happy for both of yous, I wish you both the best, it will be better than my marriage because you guys are made for each other.”

The last comment on the post is from one of Nightlinger’s daughters from a previous relationship, who wrote, ” This needs to be deleted. The little ding dong killed her she is not married to him no more he is a monster!”

4. She Was Previously Married & Had 2 Daughters, Her Ex-Husband Says

Nightlinger, who was born Pamela Dolchan, was previously married and had two daughters, her ex-husband, Jim Nightlinger, told CBS Philly.

Jim Nightlinger spoke “glowingly” about his ex-wife, saying she just wanted to help others, the news station said. He also said the loss hasn’t set in for his daughters.

Family members said in a statement that the girls, ages 13 and 16, are with family members and are grieving the loss of their mother. The family said the girls are surrounded by the love of family and friends.

None of the children were at the home at the time of the shooting, police said.

5. Kuzan Was Charged With Murder on Tuesday, Police Say

Police said Kuzan surrendered to officers who responded to the putting his hands in the air.

He was charged with murder on Tuesday. It is not known when he will appear in court. 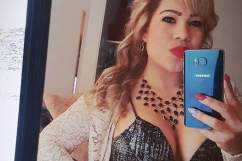