The selfie has become such an ubiquitous part of our culture that a city in Texas decided to install a statue that immortalizes them right in front of its city hall. Sugar Land, near Houston, will likely draw some extra attention from visitors looking to take a selfie with two bronze girls who are also taking a selfie.

The statue, seen above, was unveiled on May 27 and is part of a 10-piece set donated to Sugar Land by a resident through the Sugar Land Legacy Foundation, the city said in a press release. That resident was discovered to be Samuel Levin, notes ABC News.

The statement on the statues notes:

The inclusion of sculpture in the Town Square plaza aligns with the continued vision of the City and the Legacy Foundation’s commitment to establish cultural arts amenities that “provide and/or support activities and facilities that enrich the artistic, cultural, educational, and historical character of Sugar Land.”

City officials approved installing the statue, which is accompanied by a statue of a mam playing guitar. The two statues cost $32,000 together, plus $10,000 to install, an agenda from 2014 reveals.

While one citizen was concerned that this was a waste of taxpayer money, the city’s official Twitter account stressed that they were a donation.

Another Twitter user wasn’t too happy that the girls are using a Galaxy S3:

All that damn money they used to build this uglyass statue, and they give them a Galaxy S3 ? #SugarlandSelfieStatue pic.twitter.com/aL59HKo5Iy

Here’s a video of the statue:

Y'all I saw the selfie statue in Sugar Land with my own eyes; it's as ridiculous as it sounds pic.twitter.com/2FF4XQKb7K 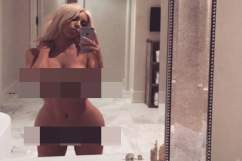