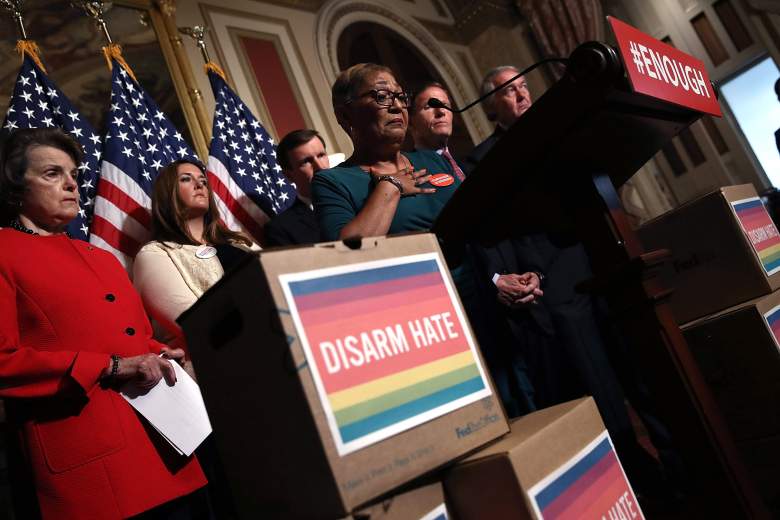 Democratic senators were joined by survivors of gun violence to demand that Congress act on legislation – they did not. (Getty)

On Monday the U.S. Senate put forth four bills aimed at improving gun control legislation in the wake of the terror attack at Pulse nightclub in Orlando, Florida less than 10 days ago that left 49 victims dead. All four bills have been rejected.

The vote comes on the heals of a nearly 15-hour long filibuster by Democratic Senator Chris Murphy to demand action on gun legislation.

The four bills centered on two topics: ensuring individuals tied to terrorism or suspected of terrorist activities are not able to obtain firearms, and improvements to background checks for individuals applying to purchase guns.

Each bill needed 60 votes in favor to advance.

One proposal each related to firearm purchases by suspected terrorists were proposed by Democrats and Republicans. A bill proposed by California Democratic Senator Dianne Feinstein which would allow the Justice Department to prevent individuals with suspected ties to terrorists and terrorism from purchasing firearms was blocked 47-53. John Cornyn, Texas Republican Senate Majority Whip, proposed a bill that allows the prevention of firearm sales in the case that a judge finds probable cause related to terrorist ties failed in a 53-47 vote.

Bills related to background checks came too from both sides of the aisle. The Democratic bill, universal background checks including for sales conducted on the internet and at gun shows, was voted down in a 44-56 vote. The Republican bill, proposed primarily by Chuck Grassley, Senate Judiciary Committee Chairman from Iowa, focused on gun bans related to mental-health issues and additional resources devoted to the National Instant Criminal Background Check System. This measure was also blocked 53-47.

Democratic politicans in support of the gun control measures have expressed their outrage:

Read More
Breaking News, Crime, Deaths, Politics, Shooting
Follow Heavy ↓
In the wake of the massacre in Orlando June 12, the Senate proposed four gun control bills. All have been voted down.