A Michigan woman’s photo went viral as she showed her toddler daughter practicing an active shooting lockdown drill at home. Stacey Feeley, of Traverse City in northern Michigan, posted the photo on June 15. A few days after Omar Mateen shot 49 people dead in an Orlando nightclub with a legally purchased assault rifle.

Feeley wrote in the caption, “Politicians – take a look. This is your child, your children, your grandchildren, your great-grandchildren and future generations to come. They will live their lives and grow up in this world based on your decisions. They are barely 3 and they will hide in bathroom stalls standing on top of toilet seats. I do not know what will be harder for them? Trying to remain quiet for an extended amount of time or trying to keep their balance without letting a foot slip below the stall door?”

After being shared more than 30,000 times and generating thousands of comments, one user wrote, “This is heartbreaking, no child should have to worry about such things, what a sad reflection of today’s society.” While another said, “Thank you for showing us how this insanity is already effecting our children from early age on.”

2. Feeley Is the CEO of a Company Which Makes Baby Products That Are an Alternative to Plastic

According to her LinkedIn page, Feeley is the CEO and Co-founder of Silikids. She says that the company:

Designs and manufactures safe, recyclable silicone accessories for kids and families. In 2006, Silikids began designing modern and practical products for parents and children.

Silikids envisioned products that offered a new function, while also being easy to use, keep clean, environmentally friendly and made entirely of silicone.

Feeley adds that she’s a graduate of the University of Colorado at Boulder. One online profile says that he co-founded the company with Giuliana Schwab. The bio says their “mission was to design safe, modern and practical products offering a new function, while being easy to use and keep clean.” While a separate profile notes they began the company in 2006 in Los Angeles before relocating to Michigan in 2014. Her section at the company’s official website reads that “When not going 100 miles an hour, Stacey can be found obsessing over sushi and all things that make a good taco.”

In November 2014, the Traverse City Record-Eagle reported that Sillikids had used a Kickstarter campaign to get their initial funding. The piece also notes that her husband, Jim Feeley, and her business partner’s husband, Bill Schwab, helped the company with their animation skills.

3. Her Husband Is an Animator Who Has Worked on ‘American Dad’ & ‘Futurama’

Feeley’s husband is Fox Animator Jim Feeley. On his LinkedIn page, Jim Feeley describes working for Nickelodeon and Warner Brothers the past. He’s a graduate of Boston College. His title at Fox is Character Design Supervisor on American Dad. Meanwhile on his IMDb page, Feeley says he formerly worked on Futurama.

4. Fox News’ Megyn Kelly Believes the Point of the Photo Is That Teacher’s Can Be Fired for Praying in Schools

In a bizarre feature on her nightly news program on Fox News, Megyn Kelly said, “We now live in a country where toddlers have to prepare for mass shootings. And where if the teachers in those lockdowns – in case of an emergency – say a prayer, they can be fired. Does any of this seem wrong to you?”

In the comments section under the video’s posting on Facebook, one woman, Pamela Sargent Burnell, took aim at Kelly saying, “I don’t believe that any teacher would be fired if she prayed with her students while a gunman was in his/her school. Who do you think is going to “turn her in” after the fact. This is simply an attempt to create divisiveness. I expected better from you, Megyn Kelly.”

5. As the Photo Was Spread Across the Internet, Democrats in the House Staged a Sit-In Protest for New Gun Laws

As the photo spread online, U.S. politicians remain split on gun control legislation. On June 20, the Senate rejected plans to change the federal background checks on gun sales. Republican senators voted down the changes citing an infringing of rights.

Meanwhile, The Hill reported on June 22 that Rep. John Lewis of Georgia was leading a sit0-in protest on the House floor to push for action on gun reforms. Lewis told the House, “We have turned deaf ears to the blood of the innocent and the deaths in our nation. Mr, Speaker, where is the heart of this body. Where is our soul? How many more mothers, how many more fathers have to share tears of grief before we decide to do anything?”

In her viral posting, Feeley paid a compliment to some politicians saying, “I applaud politicians like Senator Chris Murphy but so many of our elected politicians can’t manage to work together (maybe they shouldn’t be paid for a job they can’t do…just saying) or since they are in bed with all the wrong people, it is up to us if we want change.” 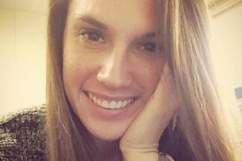