Texas has been hit hard by flooding this week, with numerous neighborhoods and regions submerged by flood waters and at least 12 lives lost. The loss from the flooding has been devastating. In Fort Hood, a military vehicle overturned in a creek, killing five soldiers inside. Three survived, Reuters reported. In San Antonio, a man's body was recovered after he was caught in metal bars at a river drainage site. Prisons also had to be evacuated due to severe flooding. Heavy rain is still forecast for Houston and eastern Texas through the weekend, with more flooding possible. Some areas might see as much as seven inches. Click through the gallery to see more photos and stories of the flooding in Texas, including Houston, the Brazos River, Austin, San Antonio, and more. In this photo, you can see homes and property under water from the Brazos River flooding on June 3 in Richmond, Texas. (Getty) 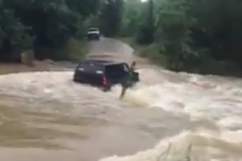