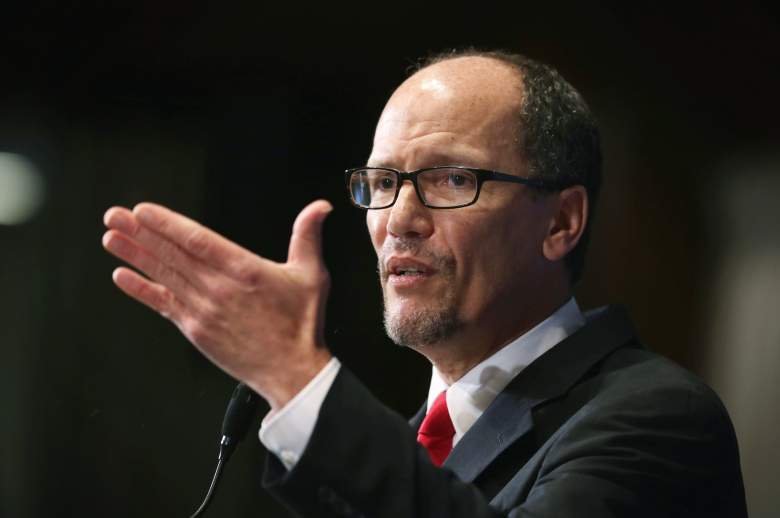 With the primaries over, the attention turns to the general election in November. There’s been speculation about Labor Secretary Tom Perez joining presumptive presidential nominee Hillary Clinton on the Democratic ticket.

“Hillary, in my view, needs somebody who’s passionate and gets out there and rallies folks,” Tony Coelho, the former California congressman who chaired Al Gore’s 2000 presidential campaign told The Baltimore Sun. “Tom’s not afraid to do what needs to be done.”

Here are five fast facts to know about Perez:

1. He Worked in the Department of Justice for Years, Focusing on Key Issues for Minorities & Liberals 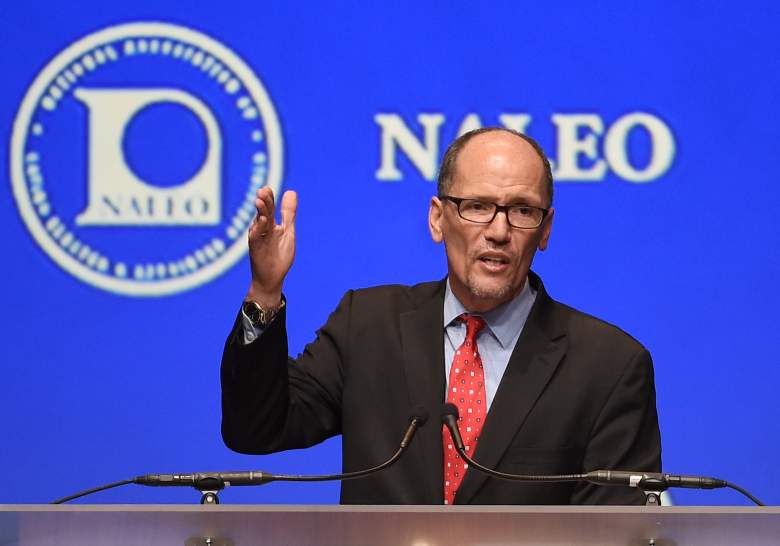 Perez speaks at the National Association of Latino Elected and Appointed Officials’ (NALEO) 32nd Annual Conference at the Aria Resort & Casino at CityCenter on June 18, 2015 . (Getty)

Under Perez, the Justice Department opened a record number of civil rights investigations into local police departments accused of brutality and/or discrimination.

Perez actively pursued civil rights inquiries against local law enforcement. The investigations included a lawsuit against Arizona’s Sheriff Joe Arpaio, who accused his department of illegally discriminating against Hispanics in its immigration crackdown and the prosecution of police officers found guilty of police misconduct in the aftermath of Hurricane Katrina. Perez also led the DOJ’s investigation into Trayvon Martin’s shooting by George Zimmerman.

2. He Has Served 3 Years as Labor Secretary 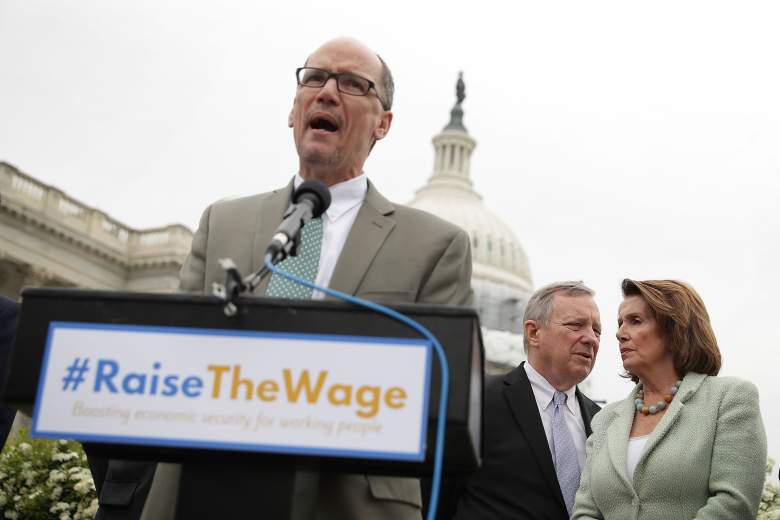 In his three years as President Barack Obama’s second-term labor secretary, Perez has become one of the most prominent members of the president’s cabinet.

“He came in with a sense of opportunity and need and was really grounded in all the ways that workers had lost ground under both Republican and Democratic administrations,” Christine Owens, executive director of the National Employment Law Project, a labor advocacy group that has worked closely with the DOL on policy issues, told The American Prospect. “He took on some big issues that had languished and made sure he pushed them through.”

Perez has been persistent in his advocacy for raising the minimum wage, arguing that states should give low-paid workers a raise to $15 an hour.

He frequently travels across the country to meet with low-wage workers fighting for a $15 minimum wage, state and local policy-makers considering paid family leave laws, and business leaders.

“The Fight for $15 is more than a number,” Perez has said. “This is a movement for fairness and voice.”

The department recently announced a regulation to extend overtime pay to millions of Americans. Other rules the DOL finalized this year include fiduciary and silica, all of which Perez has said help ensure workers’ prosperity.

At a National Press Club event on June 22, Perez said that this regulatory-focused approach has been forced upon the White House because “regrettably, we have not had a dance partner in the Republican Congress,” he explained in a speech.

3. He Endorses Clinton & Has Been Active on Her Campaign Trail

Perez endorsed Clinton in December and has been visible at her campaign events and rallies. Earlier this month, he made an appearance in Virginia after stops in Washington state and Wisconsin for Clinton. Perez also traveled to Arizona, Iowa and New York to campaign on her behalf during the primary.

His campaign work could help him raise his profile. However, Perez’s effort at the Labor Department is what has caught the attention of an important constituency– progressives. The 54-year-old attorney has garnered the support of the liberal Warren wing of the Democratic Party, a group of voters Clinton will certainly consider when vetting running mates.

Perez could help bridge the gap between Clinton and Democrats who backed Sen. Bernie Sanders, who has a large following of loyal supporters.

4. He Refuses to Answer Questions Regarding Clinton’s Vice President Shortlist 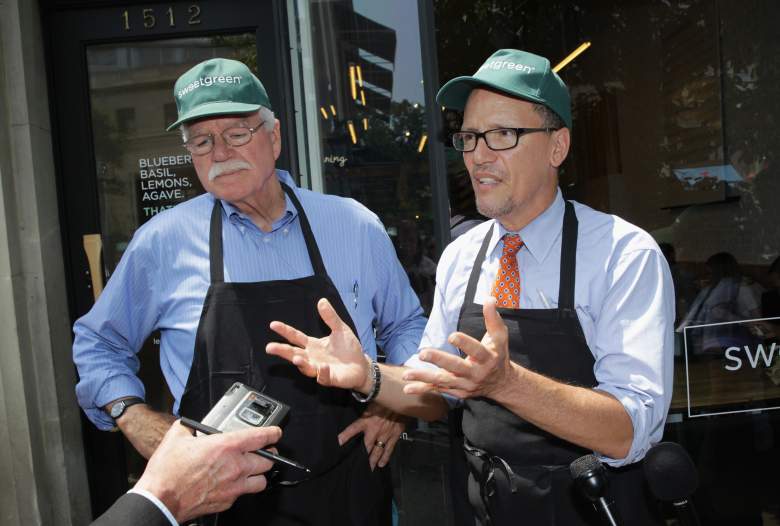 Perez has been vocal in his support of Clinton, and has positioned himself against Republican nominee Donald Trump, delivering anti-Trump rhetoric at several appearances. However, he’s been reluctant to answer questions regarding veepstakes rumors.

Perez was included in a list of nine names on the Democratic vice presidential shortlist leaked to the media last week.

“I honestly don’t give a thought for the following reason,” Perez said in an interview with The Washington Post. “I’ve got so much going on in my day job. And I’ve been around politics enough to know all the swirl that’s fit to print, and so I focus on the reality of the here and now.”

At a National Press Club event last week, he once again avoided answering the speculative questions.

“I believe the question before us is whether we can sustain and scale this progress that we’ve made in the Obama administration or whether we’re going to turn the clock back,” Perez said.

“I am confident that as we approach this crossroad and choose our path, the current administration’s progress will continue,” he said.

5. He Has Strong Ties to Labor Groups & the Latino Community 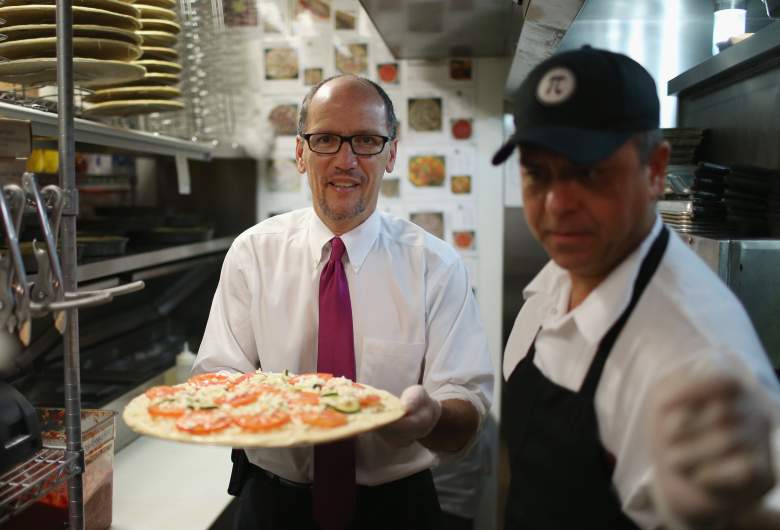 Perez (L) makes a pizza with the kitchen manager, Freddie Melgar, after a meeting regarding a higher minimum wage at the Pi Pizzeria restaurant on May 14, 2015 in Miami Beach, Florida. (Getty)

Perez is the son of immigrants from the Dominican Republic. His father, who was a doctor, died of a heart attack when Perez was only 12 years old.

He put himself through Harvard with scholarships and low-wage jobs as a trash collector and as a warehouseman, according to The Baltimore Sun.

The Washington Post point outs, he also had another personal connection to labor issues:

“Perez was 12 when his father died of a heart attack, and a friend’s father stepped in as a surrogate. The man was a Teamster who’d lost his job, and the union helped support him.”

Perez who speaks fluent Spanish, has been the Clinton campaign’s connection to Spanish-language media.

Perez could also help combat Trump on immigration issues, especially in battleground states, such as Florida, Colorado and Nevada, where large numbers of Hispanics turn out to vote. 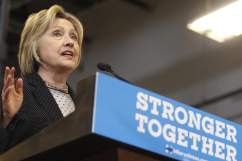