As President Barack Obama has had to do 14 previous times during his presidency, he will deliver another statement on a mass shooting. Obama decided to come out early to talk about the massacre at the gay nightclub Pulse in Orlando, where 50 people were killed and 53 people injured. It is the worst mass shooting in U.S. history.

"This was an act of terror and act of hate." —@POTUS on the tragic shooting in #Orlando https://t.co/i7fOS38GzH

Obama declared it an “act of terror and an act of hate.” He confirmed that the FBI is on the scene to work with the local officials and investigating it as an “act of terrorism.” Mateen, who Obama did not name, was a man “filled with hate,” the president said.

Obama also praised the sacrifices made by first responders. He stressed that this was an attack on all Americans, no matter their race, gender, religion or sexual orientation. He did not take any questions, following the five-minute statement.

Gunman Omar Mateen used an AR-15, reports The Associated Press. Obama has endorsed a ban on ammo for AR-15 rifles, but members of the House have opposed that proposal. Mateen, 29, was an American citizen and lived in Port St. Lucie. He was killed by a SWAT team and was found also carrying a handgun.

The president has also ordered all flags to be flown half-staff through June 16. 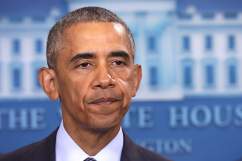 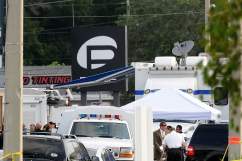