On Friday, President Barack Obama designated the Stonewall Inn as the Stonewall National Monument, the first national monument to mark the fight for LGBTQ rights. In his weekly address on Saturday, Obama further explained his decision, once again putting the site in the same breath as historically important sites like Independence Hall, Seneca Falls, Kitty Hawk, Gettysburg and the Edmund Pettus Bridge.

The Stonewall Inn was the scene of a riot on June 28, 1969 after a police raid. Those were common at the time in New York City, but those at Stonewall that day had enough and rioted. That riot sparked a movement, with the first New York City Gay Pride Parade a year later, that quickly grew across the country as LGBTQ groups pushed for equality. This weekend, New York hosts its annual Gay Pride Parade again and it is expected to be the biggest one yet.

Obama said in his address:

Over the past seven years, we’ve seen achievements that would have been unimaginable to the folks who, knowingly or not, started the modern LGBT movement at Stonewall. Today, all Americans are protected by a hate crimes law that includes sexual orientation and gender identity. “Don’t Ask, Don’t Tell” is history. Insurance companies can no longer turn you away because of who you are. Transgender Americans are more visible than ever, helping to make our nation more inclusive and welcoming for all. And one year ago this weekend, we lit the White House in every color – because in every state in America, you’re now free to marry the person you love.

Obama noted that there is still work to do, especially after the mass shooting at the Orlando nightclub Pulse on June 12. The president explained that he picked Stonewall as the newest National Monument because he believes “our national parks should reflect the full story of our country – the richness and diversity and uniquely American spirit that has always defined us.” 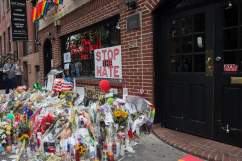 Loading more stories
wpDiscuz
1
0
Would love your thoughts, please comment.x
()
x
| Reply
In his weekly address, President Barack Obama explained the importance of the Stonewall Inn and why it was designated a National Monument this week.