Ali David Sonboly, the 18-year-old German-Iranian gunman with dual nationality who committed the Munich, Germany shooting spree, was a “depressed” and “deranged” teen, who complained of bullying, was influenced by right-wing Norwegian mass killer Anders Breivik, and read about school shootings, according to UK Telegraph and UK Daily Mail, citing police.

The shooting spree – which started at a Munich mall before spreading to a nearby McDonald’s – left at least 10 people dead (including the shooter) and more injured. CNN said Munich police initially believed there were three gunmen and that the shooting spree was a terrorist attack. However, the BBC later reported police now believe there was one gunman; Daily Mail says police found a book about school shooters in Sonboly’s backpack and that police say he did not have clear political motivation. Some media were calling him David S. and others Ali David Sonboly.

We found a man, who killed him himself.
We assume, that he was the only shooter. #gunfire #munich

There were conflicting accounts of the gunman’s background and motive in the immediate aftermath of the shooting, with some claiming Sonboly shouted “I am German” and made anti-immigrant comments and another eyewitness telling CNN she heard the shooter shout “Allahu Akbar” before shooting children in the face at the McDonald’s across the street from the mall.

CBS said police were calling the attack “suspected terrorism,” but they said on Saturday that Sonboly had an “obvious link” to a far-right Norwegian mass murderer, Breivik, and that they have not found any ties to ISIS; Breivik, according to BBC, was a right-wing mass murderer motivated in part by anger at Muslim immigration. Daily Mirror says Sonboly had a picture of Breivik as his Whatsapp profile and a friend told German media he was a “fan of mass murders.”

The Munich shooting was considered an active shooter incident for several hours, as German police launched an extensive manhunt, as reports came in that the shooter had killed himself. The number of people killed and the number of gunmen varied during the immediate aftermath of the shooting but has grown to nine deceased victims with 16 wounded. 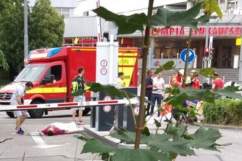 1. The Shooter Was ‘Depressed’ & ‘Deranged’ & Had a Book About School Shootings, Police say

Brave shopper tells gunman: 'You're not a German you're a w*****' #Munich https://t.co/dyqOmsMAuw pic.twitter.com/VrTkTDSMWa

In a Saturday, July 23 press conference, Munich police described Sonboly as depressed and deranged, and said he had received psychiatric treatment in the past, AFP said. In a citizen video captured while he was on a rooftop, Sonboly had mentioned being bullied and previously seeking medical treatment. The Independent says police believe Sonboly planned the attack for a year.

According to UK Daily Mail, Sonboly had the book, Why Kids Kill: Inside The Minds of School Shooters in his backpack. The book, published in 2010, describes its contents as “In this breakthrough analysis, Dr. Peter Langman presents the psychological causes of school shootings and offers unprecedented insight into why certain teens exhibit the potential to kill.” UK Telegraph says he also had newspaper articles on mass shootings. The Mirror said Sonboly had the German version of the book. The Independent says police believe Sonboly had “visited the town of Winnenden last year to take photographs of the scene of a previous school shooting in 2009.”

As was seen during the Nice, France terrorist attack at a Bastille Day celebration, the Munich attack was captured in fragmented citizen videos and photos that were immediately disseminated via social media, including Twitter and YouTube. One of the most disturbing videos appeared to show the gunman shooting at people outside the McDonald’s.

In that video, the gunman points a weapon and fires as terrified people flee. Police used a robot to inspect the gunman’s body. Der Spiegel said the gunman was previously unknown to police.

The Belfast Telegraph said a neighbor described Sonboly as having “shy” body language. Iraq Magazine said Sonboly lived two miles from the shooting scene and used a Glock 17 semi-automatic handgun to carry out the attack. Police said he filed the serial number off the weapon, and he had 300 rounds of ammunition with him, Iraq Magazine said. The Independent says he bought it online through the “dark net.”

2. The Shooter Lived With His Parents, Was a ‘Quiet Type’ Who Claimed He Was Bullied & May Have Shouted ‘I am German’ On an Unverified Citizen Video

Bild says the gunman lived in “the district of Maxvorstadt” with his parents. Bild said he went to school near the residence and his neighbors had seen him the day before. Bild quoted a neighbor as saying, “He lived right next to me. I saw him only occasionally and do not really know him. A friend of mine was his classmate, saying that he was more of a quiet type.” Sonboly’s hairdresser told the UK Telegraph that the family was Shia Muslim but Sonboly wasn’t religious; ISIS opposes Shia Muslims.

Other attacks – such as the one in Nice and last fall in Paris, France – were perpetrated by Muslim suspects who may have at least been influenced by ISIS. However, in the Munich attack, early media reports indicated it was possible that the gunman had a different motive: He might have been targeting foreigners. This remained unclear as the manhunt continued, and police are still not applying a definitive motive to the attack, but his anger may have been sparked, at least in part, by bullying at school. Iraq Magazine said that Sonboly had previously threatened to kill people who bullied him in school. One school friend wrote on a chat that Sonboly was “mobbed” by school bullies, the Mirror said.

One video circulating on social media appeared to show the gunman in a shouting match with bystanders. At one point, the gunman appears to say, “Ich bin Deutscher” or “I am German.” In the rooftop video captured by a civilian, Sonboly shouts that he was born in Germany and says that he lived in the Turkish area of a town, was bullied, and received media treatment, according to translations of the video on Reddit and CNN. Watch:

The Mirror says that the gunman may have shouted “f***ing foreigners” before opening fire. According to an earlier account in the Mirror, a “Taxi driver says #Munich shooter ‘was not foreign.'” However, on July 23, Munich police chief Hubertus Andrae called Sonboly a “classical shooter without any political motivation,” said Daily Mail, and confirmed that Sonboly committed suicide.

Reddit has posted a translation of the video. The translation quotes the gunman as also saying, “I grew up here in the Hartz 4 (unemployment benefits in Germany) area” and “Yeah what, I was born here!” The bystander then insults the shooter repeatedly, according to the translation.

3. An Eyewitness Says The Gunman Shouted ‘Allahu Akbar’ Before Shooting Children & Her Son Saw a Gunman Loading His Weapon in The Bathroom 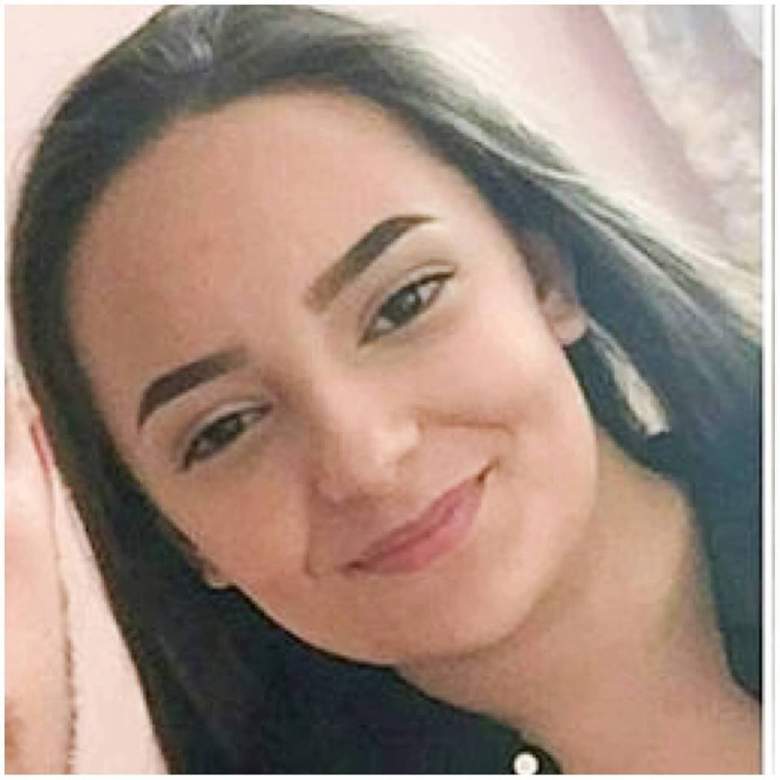 An eyewitness told CNN that she heard a gunman say “Allahu Akbar.” Sonboly had the Turkish flag as his Facebook cover photo.

CNN reported that a woman named Lauretta told CNN that she was in the McDonald’s near the mall when Sonboly emerged from the bathroom and started shooting. She told CNN’s Dugald McConnell: “I come out of the toilet and I hear like an alarm, boom, boom, boom. He’s killing the children (…) The children were sitting to eat. They can’t run.” The gunman yelled “Allahu akbar!” she said. (That phrase was also uttered by Nice killer, Mohamed Bouhlel, before police shot him).

Some victims’ identities were starting to be released, and Facebook tributes sprouted up for one, Armela Segashi, a Kosovo-Albanian woman (picture above). Zabergja Dijamant and Sabina Sulaj were also named as victims. All three are from Albania, said UK Telegraph.

Another witness, identified as Murat T saw “lifeless bodies” in the restaurant when he went to look for a friend of his son, said The Daily Mail. Daily Mail said the son “heard gunshots while on the phone to his friend, before the call cut out. He said: ‘We no longer reach him. Not even his parents. He is like my brother.'”

4. The Gunman Was the Son of a Taxi Driver & May Have Used a Fake Girl’s Name to Lure Children to McDonald’s

Witness shouts ‘You are a w*****!’ at #Munich gunman. He replies: ‘Shut your trap’ https://t.co/JIMZ4nyiCV pic.twitter.com/wM2kUJ5TTK

UK Telegraph says Sonboly may have drawn people to McDonald’s by posing as a teenage girl called ‘Selina Akim’ on Facebook and saying the restaurant was going to offer free food.

See screenshots of those Facebook messages here. Iraq Magazine says Sonboly’s father is a taxi driver and his mother works in a department store.

News reports said the shooting began in the mall. The gunman then moved across the street to a nearby McDonald’s. There were also reports of other shooting scenes throughout the city. CNN said that Munich was in “virtual lockdown” at one point after the shooting. The Telegraph says Sonboly was targeting Turkish and Arabic origin teenagers because those were the groups who bullied him at school and that police no longer consider the attack related to terrorism.

According to the Daily Mail, police said they were interviewing at least 100 witnesses and said: “We are at the moment after three attackers…Our priority is to catch the attackers at this stage and then we will inform you again.” However, they now think Sonboly acted alone.

5. Sonboly Was Interested in Mass Shooters & Had First-Person Shooting Games on His Computer 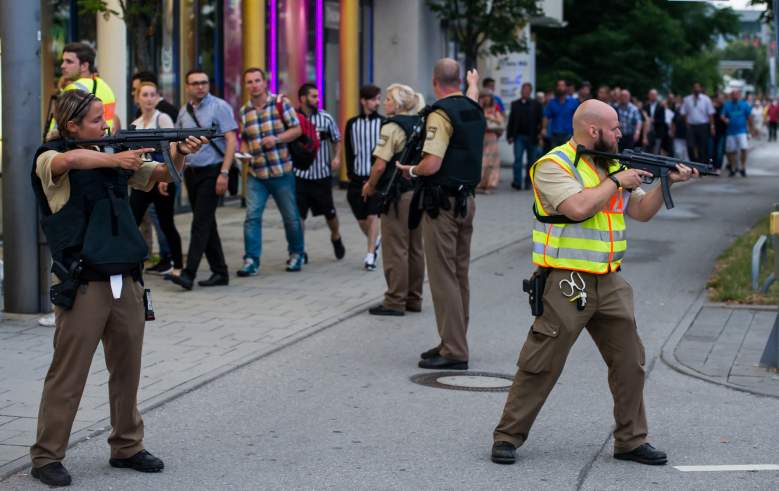 MUNICH, GERMANY – JULY 22: Police officers guard with guns as other officers escort people from inside the shopping center as they respond to a shooting at the Olympia Einkaufzentrum (OEZ) at July 22, 2016 in Munich, Germany. According to reports, several people have been killed and an unknown number injured in a shooting at a shopping centre in the north-western Moosach district in Munich. Police are hunting the attacker or attackers who are thought to be still at large. (Photo by Joerg Koch/Getty Images)

According to UK Daily Mail, police found files relating to mass shooters at the home where Sonboly lived with his parents, and the teenager had active-shooter games on his computer. The UK Telegraph says evidence shows he was “inspired” by Breivik.

According to the BBC, Breivik “harboured radical right-wing views and said his attack was aimed at stopping Muslim immigration to Europe.” He murdered 77 people in Norway on July 22, 2011 in a bomb attack in Oslo and a mass shooting at an island youth camp for “young centre-left political activists on the island of Utoeya.” Breivik is being held in solitary confinement. The Munich shooting occurred on the anniversary of the Breivik attack.

The number of people killed kept growing in the hours after the Munich shootings. First media reports said one person had died, then several, then three, and then six. There were also people injured in the attack. The death toll now stands at nine victims with many others injured. Three Turkish citizens were listed among the dead.

The shootings began at a mall that is adjacent to the site of the 1972 Olympics, said CNN, quoting police as saying: “The manhunt is underway at high speed.”