Asa Hutchinson, the 65 year old Republican governor from Arkansas, is scheduled to speak at the Republican National Convention today in Cleveland, Ohio.

Hutchinson was elected governor in 2015, and a poll by the Morning Consult taken in May 2016 indicated that his 66 percent approval rating in the state of Arkansas makes him the eighth most popular governor in the country. In addition to a high approval rating, he has significant political experience and a history of strong bipartisan support.

While Hutchinson’s favorable standing among fellow politicians and constituents makes his appearance and speech at the Convention helpful for legitimizing the Trump ticket, he was not always a supporter of the candidate.

Here’s what you need to know about Asa Hutchinson.

1. He Made National History as The Youngest Appointed United States Attorney 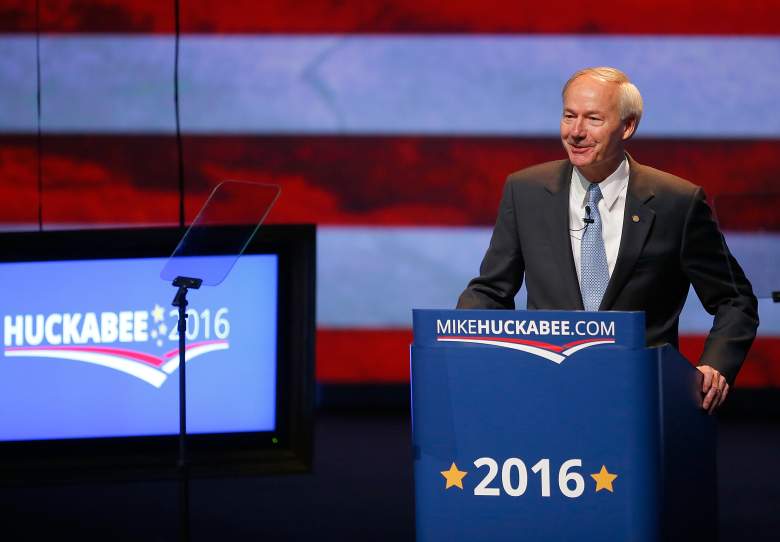 In 1982 Asa Hutchinson was the youngest appointed U.S. Attorney at age 31. (Getty)

According to the governor’s website, Hutchinson practiced law for 21 years after he graduated in 1975 from the University of Arkansas School of Law. In 1982 when Hutchinson was just 31 years old, President Ronald Reagan appointed him as U.S. Attorney for the United States Western District of Arkansas.

One of his most prominent cases was against polygamist James Ellison’s white supremacist and domestic terror group The Covenant, The Sword, and The Arm of the Lord. Hutchinson successfully prosecuted the group on terrorism and weapons-related charges after a stand-off at the group’s property with more than 300 federal, state, and local law enforcement agents. After three tense days, Hutchinson was able to successfully negotiate the armed stand-off peacefully.

2. He Was a Prosecutor on The Impeachment Trial of President Bill Clinton 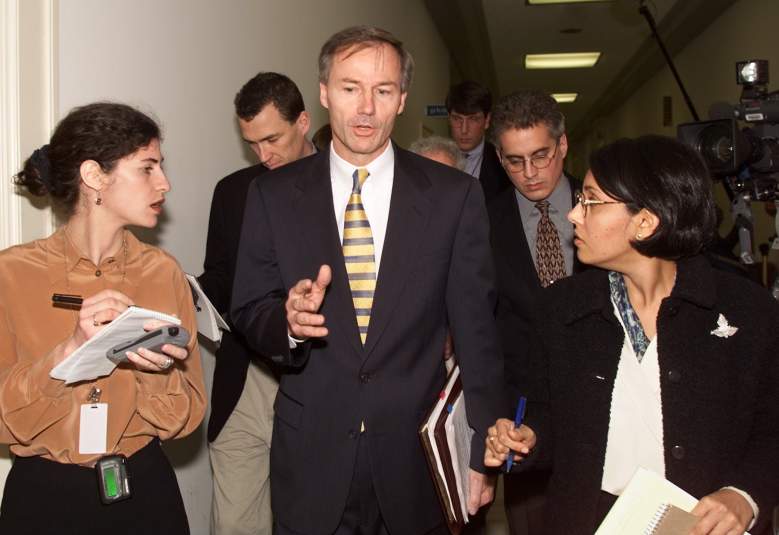 Hutchinson was a prosecutor on the impeachment trial of President Bill Clinton in his home state of Arkansas. (Getty)

Hutchinson was tapped to be a manager (prosecutor) in the impeachment trial of President Bill Clinton from 1998 until 1999, when four charges were brought against Clinton related to his extramarital affair with Monica Lewinsky. The charges included two of perjury, one of obstruction of justice, and one of abuse of power. The managers needed a two-thirds majority in the Senate (67 senators) to remove President Clinton from office, but only 50 voted to remove him and he was thus acquitted of the charges.

In Hutchinson’s opening remarks, he told senators of his “deep regret” to have to be in the position to argue against the president on grounds of impeachment, but outlined “seven pillars of obstruction” that he argued Clinton perpetrated while president. He argued: “as we go through the facts of this case, the evidence will show that a scheme was developed to obstruct the administration of justice, and that is illegal.”

Hutchinson admitted in an interview with the AP that the impeachment was difficult, particular in the home state of the president, but stated: “I could actually help our country go through a difficult time, and so I accepted that responsibility reluctantly.”

Hutchinson told TIME earlier this year that President Clinton’s impeachment trial should play no part in the current election, and should not be used by Trump as a reflection of Hillary Clinton’s qualifications as a candidate for office. Hutchinson said: “It was litigated, the judgement was made by the United States Senate, and I think we need to move on from that.”

3. Politics is a Hutchinson Family Affair 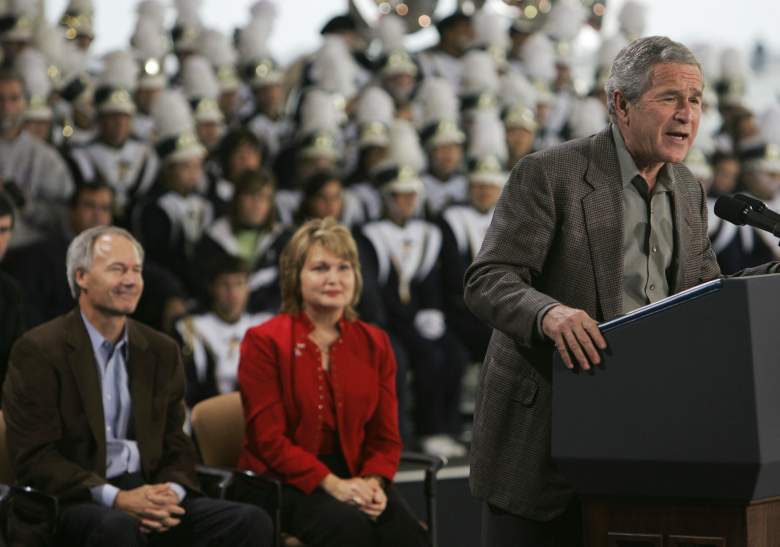 Hutchinson and his wife, Susan, have been married for 42 years. Pictured with former President George Bush. (Getty)

Hutchinson is not the only politician in the family. In fact, after unsuccessful bids for a Senate seat in 1986 and Attorney General in 1990, he was first elected to political office in 1996 as Congressman for Arkansas’ Third District, when his brother Tim decided not to seek re-election. Tim instead ran and was elected for an open Senate seat. Asa served two more terms in Congress, after winning re-election in 1998 and again in 2000 when he ran unopposed.

Susan, his wife of 42 years, is a former school teacher, and together the couple have four children and five grandchildren.

4. Hutchinson Has Served as Administrator of the Drug Enforcement Agency & Recently Supported The Right to Medical Marijuana

Following election to his third term in Congress in 2000, Hutchinson resigned from his seat in 2001 in order to become administrator of the Drug Enforcement Agency (DEA). Hutchinson brought attention to drugs and issues that were emerging in particular demographics at the time, and also emphasized that more investment was needed in prevention and treatment efforts, such as helping non-violent drug offenders stay clean through the help of drug courts.

In 2011 during a debate at the University of Arkansas, Hutchinson voiced his support for the right to medical marijuana use. He stated:

I think that if there is a medical need and the doctors say you need a particular substance – whether it is Marinol or marijuana or whatever – if the doctor or medical community says that, then patients ought to be able to get that.

Unfortunately drug abuse has also hit close to home for Hutchinson. The Arkansas Times reported in May that Hutchinson’s son was arrested for drug possession at a music festival. The governor commented on the arrest to local news KATV:

In February 2016, Hutchinson endorsed Marco Rubio as the Republican presidential candidate. In the days following his endorsement of Rubio, Hutchinson released a statement stating:

It is up to Arkansas to stop the Donald Trump show. The next generation of conservatives cannot allow Donald Trump to take everything we stand for and throw it away. Marco Rubio has shown that he is the only candidate that can take the fight to Trump and win. If conservatives are serious about stopping him, then we need to unify behind Marco to win in November.

He also told NPR that ultimately he would support the Republican presidential nominee, but:

…we have to respond with leadership, with good temperament. We have to also, as leaders, help educate the public as to what’s the right ideas. What is the right thing that we’re going to replace Obamacare with? What’s the right direction for our country in terms of security? And these are serious discussions. They’re not salesmanship. There’s not – it’s not a circus atmosphere. You know, these are serious discussions as to the direction of, really, the free world.

Host Robert Siegel pressed Hutchinson to clarify if he was referring to the Trump campaign in his “circus atmosphere” comment. To which Hutchinson responded:

After Rubio withdrew from the race and Trump became the presumptive nominee in May, Hutchinson then indicated that he would support Donald Trump, stating:

I do not agree with everything Mr. Trump has said nor have I endorsed every policy he’s announced, but I do believe the Republican Party’s fiscally conservative approach to government and the values we stand for are far greater than what the other side has to offer the American people. Those are the reasons why I will support the nominee of the party in November.

Loading more stories
wpDiscuz
0
0
Would love your thoughts, please comment.x
()
x
| Reply
Asa Hutchinson is speaking at the Republican National Convention today. Here's what you need to know about the governor from Arkansas.