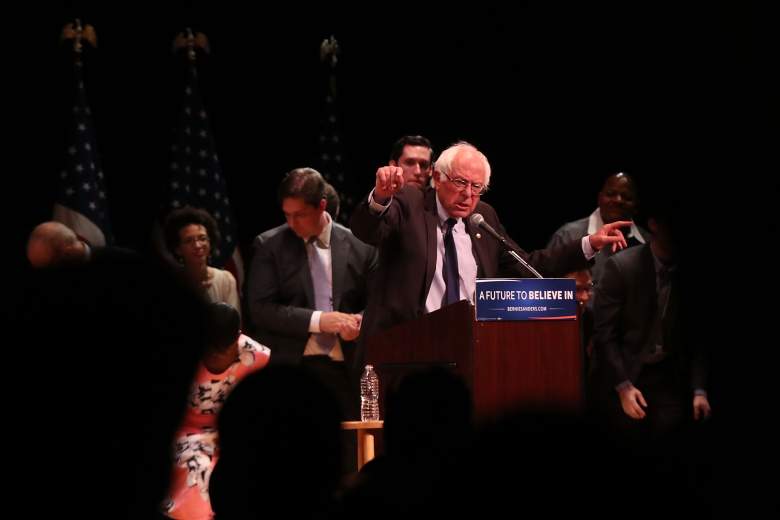 On Tuesday night, hours after he endorsed Hillary Clinton at her rally in New Hampshire, Bernie Sanders had a conference call with his delegates. His delegates are, understandably, concerned and worried about what their role is going to be now that he has endorsed his rival and the Democratic National Convention is merely weeks away. Should they still be planning on attending? Should they still be raising funds to go? In a nearly 38 minute long discussion, Sanders answered questions about what’s next for the campaign.

You can listen to the audio of his conference call below. His part starts around two minutes in, after a short introduction.

Sanders answered a few key questions that are on everyone’s mind. First, he said, he is not suspending his campaign or conceding, although he did endorse Clinton. And he will be speaking before the Convention.

Here’s what he said during the call, which you can listen to above.

“We are still officially a campaign,” he said during the call. “I’m not going to suspend… We have 1,900 delegates. She has more. She’ll come out as the nominee. Then I’ll do everything I can to defeat Donald Trump.”

Earlier in the phone call, he shared the same sentiments:

“We came up short,” he told the delegates on the call. “Clinton ended up with 389 more pledged delegates and a hell of a lot more superdelegates… I worked as hard as I could to win this thing.”

But he still wants his delegates to come to the Convention for several reasons. For one, he wants them to participate in the roll call vote.

“There will be a roll call vote and we need all of you there to get all the delegates counted,” he said, adding later that he wanted all nearly 1,900 delegates on the books for Sanders.

It appears that Sanders will be taking a slightly different tactic than Hillary Clinton did in 2008. During that Convention, she interrupted the official roll call to move that Barack Obama be elected the nominee by acclamation. It appears from the conference call that Sanders will be going through the entire roll call and letting his delegates vote.

He said that despite concerns that his delegates might not be given access to the Convention, he’ll make sure that doesn’t happen.

“We’re going to have attorneys in Philadelphia,” he said. “We’ll make sure every one of you gets your seat.”

He Wants to Move the Democratic Party to Being Grassroots-Focused

He also wants his delegates there to be a voice for the Democratic Platform and other key parts of the Convention.

“We’ve had significant success in the progressive Democratic platform, but we did not get everything we wanted…” He added that the fight he wants to focus on while on the floor of the Convention is transforming the Democratic party into a grassroots party. This includes focusing on being people-oriented rather than big-money fundraising oriented.

He also wants to work within the meeting of the rules committee, just before the Convention, to change the role of superdelegates, to change the primaries from being closed, and to work on other issues that disenfranchise voters.

During his call, Sanders also told his delegates that he will still be campaigning and will be visiting many of their states. He intends to continue to play an active role, he said, and will be creating new successor organizations that will continue the struggle his campaign fought for, but this time by supporting other candidates for federal, state, and local positions. This includes helping them financially and logistically.

“That has not yet been worked out.”

Loading more stories
wpDiscuz
117
0
Would love your thoughts, please comment.x
()
x
| Reply
Bernie Sanders had a long conference call with his delegates following his endorsement of Clinton. Listen to it here and find out his future plans.