There were plenty of Bernie Sanders supporters in the Philadelphia audience as he received a standing ovation prior to his DNC speech. Sanders touched on some of the key issues that gained traction during his campaign. He also emphatically endorsed Hillary Clinton in the upcoming election.

Sanders spoke about the economy and ensuring that the country’s future economic system worked for more than the top “one percent.”

“Hillary Clinton must become the next president of the United States,” Sanders told the crowd. He spoke of a coming together between the two campaigns noting they produced “the most progressive platform in the history of the Democratic party.”

Sanders closed his speech with a nod to Clinton’s campaign slogan.

“Hillary Clinton will make an outstanding president, and I am proud to stand with her tonight,” Sanders said.

Thank you, @BernieSanders. Let's do this. #DemsInPhilly pic.twitter.com/FJfRjgALMr

"Donald Trump? Well, like most Republicans, he chooses to reject science. He believes that climate change is a 'hoax.'” —@BernieSanders

What an emotional night. Thank you @BernieSanders for being a class act and putting the people before yourself. Let's go win this thing. 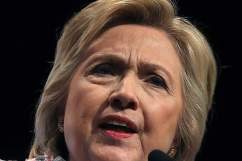