Cameron Sterling is the 15-year-old son of Alton Sterling, the man shot and killed by police in Baton Rouge, Louisiana on July 5. During the first press conference held after Sterling’s death, Cameron broke into tears, turning away from the cameras. On July 13, he calmly delivered his own statement, urging for peaceful protests.

Here’s what you need to know about Cameron and the Sterling family.

1. Cameron Had to See His Father’s Death on the Local News

During the press conference on July 6 in front of Baton Rouge city hall, Cameron’s mother, Quinyetta McMillan said that her son watched the video of his father being shot on television. Cameron tried to help his mother get through the press conference before he himself turned away from the media.

“He had to watch this, as this was put all over the outlets,” McMillan said. “As a mother I have now been forced to raise a son who is going to remember what happened to his father.”

McMillan said that Cameron is the oldest of Sterling’s five children. They depended on their father to earn money every day. Sterling was selling CDs outside a convenient store when he was shot.

2. McMillan Thanked Supporters Who Have ‘The Best Interest of My Son at Heart’

After the press conference, McMillan posted a statement on Facebook, thanking supporters who have shown sympathy towards Cameron and have had “the best interest of my son at heart.”

As we take time and reflect on what has transpired. I would like the media and all other conduits to allow my family time to process what is going on in this desperate time. I’m trying to get several things in order especially with a full heart in the thoughts of my son. I want to thank all of the individuals who truly have the best interest of my son at heart. Please continue share and push out any information that comes in over the course of this time. Again, I express my deepest gratitude to the citizens of Baton Rouge and all over the nation.

3. Sterling Took Him to the Movies the Week Before the Shooting & Were Very Close

In an interview with the Daily Mail last week, McMillan said that Sterling and Cameron had a very strong father-son relationship.

“They were a very close father-and-son and my brother was very good to him. Only last week Cameron took his daddy to the movies for his birthday; they were always hanging out,” McMillan told the Daily Mail. “It has been very tough on Cameron. He saw the first video of his father dying and it hit him bad. He hasn’t seen the second video and he is in a bad way.”

In just six days, a GoFundMe page has raised $714,000 for scholarships for Cameron and his four siblings. The page was created by actress Issa Rae. She wrote that she worked with Edmond Jordan, the Sterling family spokesman and attorney to make sure that the family receives every single penny the page raises.

“I have left word for the Edmond, the family attorney and have been consulting with my legal advisors to ensure that ALL of the money will get to the family (hopefully tax free),” Rae wrote. “We’re working on the most efficient plan and I thank all of you who have reached out to help and offer your services/connections. I will continue to keep you posted.”

5. He Called for Peaceful Protests After the Dallas Shooting

Cameron delivered a statement on July 13, telling the media that his father was a “good man” and called for everyone to “come together as one united family.”

Cameron also made a point to tell protesters to have peaceful demonstrations. “I want everyone to protest the right way. Protest with peace, not guns, not drugs, not alcohol, not violence,” he said.

The comments came after the shooting in Dallas, where Micah Johnson killed five police officers as a Black Lives Matter protest was ending. 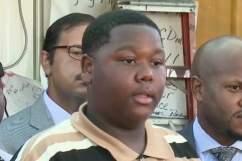