The RNC has had some unconventional speakers to go with an unconventional candidate. UFC president Dana White addressed the RNC crowd on Day 2 of the convention. The speech was part of the theme “Make America Work Again”.

As expected, White used the “fighter” metaphor to parallel his business of MMA, and Trump as someone that will fight for the country.

He opened his speech by discussing the early days of UFC when venues were not eager to host events. White spoke of Trump’s willingness to take a chance on the sport and his ability to bring people together. He praised Trump’s ability to reach a fair deal for all people involved.

Finally, White spoke about Trump’s work ethic and his willingness to work hard to get things done. He pointed to Trump’s leadership as the kind the country needs. 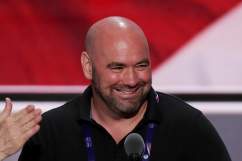