This is who I'm voting for President this election. I'll be writing in the name of Dallas Police Chief, David Brown. pic.twitter.com/OHT0pKENt3

Dallas Police Chief David Brown’s rousing and moving speech at the Dallas memorial for fallen officers has the Twitterverse talking: Should David Brown run for president? (Or maybe he should be someone’s running mate. Are you listening, Hillary Clinton and Donald Trump?)

There’s even a Twitter handle on the idea: #DavidBrownForPresident

In contrast to the divisiveness of America’s politics, it’s Brown who’s emerged as a national figure of unity in a divided nation, an African-American police chief who, when asked how to bridge the gap between “black and blue,” told The New York Times, “I’ve been black a long time, so it’s not much of a bridge for me.” People on Twitter say they like the fact that Brown seems authentic and humanistic while authoritative.

In a cynical season of politics, Dallas Police Chief David Brown has really struck a nerve with people I know. Authority/authenticity.

At this point, presuming people are serious, Brown would have to be written in; in order to run for president, a candidate has to meet ballot access rules and deadlines unless chosen by a party that has already satisfied the requirements. Of course, there’s always vice president, with both Trump and Clinton gearing up to round out their tickets and floating unorthodox names of non-politicians – a lieutenant general, an admiral.

When Brown speaks about police and shootings, his words come from a deeply personal place. Brown’s son of the same name “killed a police officer six years ago before being fatally shot himself,” said USA Today. Brown’s son died in a shootout with police in suburban Dallas while “reportedly on drugs,” noted USA Today. Brown, a 30-year veteran of the Dallas Police Department, also “lost a brother and a partner to violence,” said the newspaper. And now he’s lost four from his force in one day (as well as an officer with the Dallas Area Rapid Transit system). 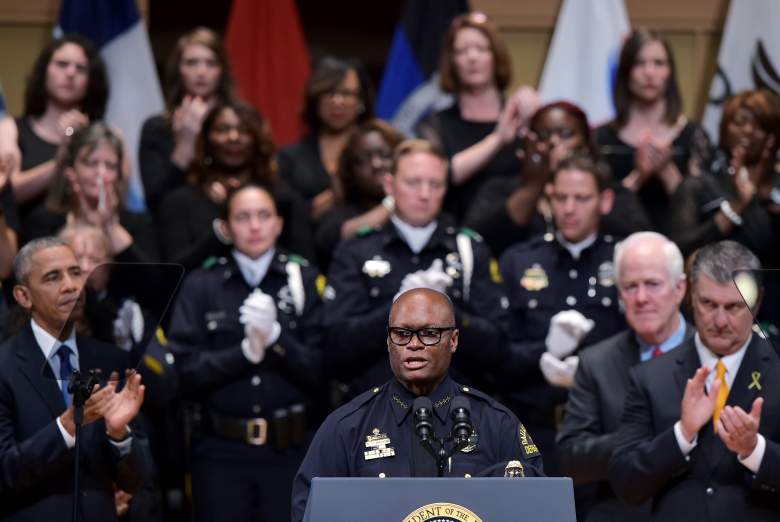 Dallas Police Chief David Brown speaks during an interfaith memorial service for the victims of the Dallas police shooting at the Morton H. Meyerson Symphony Center on July 12, 2016 in Dallas, Texas.
President Barack Obama attended a somber memorial Tuesday to five police officers slain in a sniper ambush in Dallas, as he seeks to unify a country divided by race and politics. / AFP / MANDEL NGAN (Photo credit should read MANDEL NGAN/AFP/Getty Images)

Brown for President talk, whether serious or wishful thinking, became even more of a buzz after’s Brown’s memorial speech in Dallas on July 12, which was widely praised, and in which he delivered memorable quotes that have many calling the speech a history making one. He filled much of the speech with Stevie Wonder lyrics:

.@DallasPD Chief David Brown spoke about the sacrifice of the five officers killed in an ambush on Thursday night. pic.twitter.com/xHc5YkOCQ7

At “podiums and press conferences” since the mass shooting, Brown has been “eloquent and resolute,” said The Fort Worth Star Telegram.

Here’s what people are saying on Twitter about a Brown run for president:

Dallas Police Chief David Brown is my write-in candidate for the 2016 presidential race.

Hey, #RNC2016, Do this nation a favor and draft #DavidBrownForPresident

#DavidBrownForPresident I mean it. Write this man's name on your ballot.

A sentiment I'm seeing more and more: "If Dallas Police Chief David Brown ran for president right now, I'd vote for him."

Group text message of the day:

Anyone else wish Dallas PD Chief David Brown would run for President. What a great man to be serving that city. Has his priorities right!

@ladygaga @CNN I fully intend to write in David Brown for President of the United States this fall. #leadership #Election2016

I would vote for Chief David Brown for president. This man GETS IT.

Chief David Brown for President. He has spoken calmly and eloquently to America. God bless him and his officers.

David Brown for president. What an intelligent, caring human being. https://t.co/xY93aDT00E

Chief David Brown is a rising star in this. Can he be president?

I'm a fan of Dallas police chief David Brown. Guy has my vote for President.

Loading more stories
wpDiscuz
1
0
Would love your thoughts, please comment.x
()
x
| Reply
After his moving speech at the Dallas police memorial, many are saying Dallas Police Chief David Brown should run for president.