Jesse Michael Gomez is also accused of shooting Officer Wade Irwin, according to The Wall Street Journal. Irwin is recovering from his injuries.

Gomez’ name was released by the department on the evening of July 29 after a manhunt resulted in the arrest of a possible second suspect. However, the second suspect has not yet been charged. Gomez was arrested on suspicion of murder and attempted murder.

Officer DeGuzman was a 43-year-old married father of two who had been on the San Diego police force for 16 years and was, along with Irwin, a member of an elite gang unit. It’s still not known whether or not the incident started with a traffic or pedestrian stop, Police Chief Shelley Zimmerman said.

The murder of DeGuzman comes on the heels of police officer murders in Baton Rouge, Louisiana, and Dallas, Texas. In those cases, the shooters were upset, at least in part, over police shootings of African-American men in Baton Rouge and Minnesota. However, the motive in the San Diego shooting was still unclear the day after the July 28 late night shooting. The Los Angeles Times says DeGuzman was the 10th American police officer shot in July 2016.

1. Gomez Was Tracked to a Nearby Ravine Because He Left a Blood Trail, Police said, But His Family Is Still Supporting Him

According to San Diego police, Gomez was also wounded in the gun battle. Police followed his blood to a ravine near the shooting and arrested him there, said The Los Angeles Times.

The LA Times said Gomez had a gunshot wound to the chest and was critically injured. Gomez is still in the hospital, said Patch. Originally, the San Diego chief only identified Gomez as an “Hispanic male adult,” said Fox 5 San Diego.

The Police Department’s spokesman told Heavy: “Gomez is a legal citizen in this country to the best of my knowledge. If I hear differently I’ll let you know.” He also said that the department does not release “criminal rap sheets by law” and that neither the Police Department nor Sheriff’s Department releases mugshots of suspects.

On Facebook, Gomez’ son with the same name posted a photo of himself with his father after the shooting. The son wrote, “Thanks for everyone who support my pops really means a lot to me. Don’t gotta say shit cause I know the love you guys got for my pops and the rest of the familia I know I been there since day 1.” He also wrote that he has to “wait for the news to tell me if my pops is” dead or alive. “They Wont Let Us See You or Let Us Know Your Condition #iLoveYouPops.” One man wrote an expletive to refer to the police on the comment thread under the photo.

Another son of Gomez, Daniel, told The San Diego Union-Tribune, “My dad is a good person. I don’t believe he did this. No one in my family believes he did this.”

2. Gomez Was a Construction Worker Who is Divorced With a Grandchild

MEDIA BRIEFING: "Our hearts go out to the wife and two kids of fallen Officer Jonathan DeGuzman" – @ChiefZimmerman pic.twitter.com/l2Na4X4Cow

Gomez’ son Daniel said his father was a construction worker who was divorced, loved his three adult sons and 9-year-old granddaughter and was a jokester. The family denied he had been in trouble with the law recently before the shooting of the officers and said they didn’t think he was in a gang, said The San Diego Union Tribune.

The two officers were wearing bullet proof vests. Those vests didn’t prevent them from being shot multiple times in the chest in what police said was a fast-unfolding shooting that was also captured on at least one officer’s body cam video. Reuters said the shooting occurred when the two officers tried to stop at least one person (now identified by police as Gomez) in a high crime neighborhood in southeastern San Diego.

Three police officers have been shot and killed in San Diego since 2010, said The Los Angeles Times. DeGuzman and Irwin were part of an elite gang suppression unit, said Channel 7 San Diego.

The police chief said that officers who responded to the scene when the officers called for emergency backup made “heroic” efforts to save DeGuzman’s life, rushing him to the hospital. Their emergency backup call came shortly after they had radioed in that they were going to stop someone at 11 p.m. Thursday night, said the chief.

3. The Motive For the Shooting Was Unclear & Police Don’t Know if it Was an Ambush

Police are not certain what the motive was for the double shooting; the officers called for emergency backup, and when officers arrived, they found them wounded and rushed them to the hospital in a patrol car.

4. A Second Man Was Arrested After a House Was Surrounded, But it’s Not Clear Whether He was Involved

That man, Marcus Antonio Cassani, 41, was arrested after police launched an extensive manhunt to see whether there was more than one suspect. They surrounded a house the man was in and eventually took him into custody after a standoff. However, he was arrested on an outstanding warrant, and it’s not yet clear whether he was involved in the shooting or not. He has not yet been charged.

Patch quoted Chief Zimmerman as saying, “At this time, we have not determined if Cassani is involved in the murder of DeGuzman and attempted murder of Irwin.”

The San Diego Union Tribune spoke to Cassani’s sister, Marissa Cassani, on the telephone, and she said that he told her it was “a case of mistaken identity.”

5. The San Diego Padres Paused For a Moment of Silence For Officer DeGuzman, Who Was Remembered as a Man Who Talked About His Family Constantly

A moment of silence for fallen @SanDiegoPD Officer Jonathan DeGuzman. Our thoughts continue to be with his family. pic.twitter.com/e87Izv8zhr

The police chief said that DeGuzman was married with two young children. The injured officer, Irwin, was also married, and his wife was at his side at the hospital, police said. Chief Zimmerman said that she knew DeGuzman and described him as someone who always talked about his family. Irwin and his wife also have a young child.

“I personally worked with him when I was a lieutenant at Mid-City Division,” she said, according to Fox 5. “I know him, and this is gut-wrenching. He cared. He came to work every single day just wanting to make a positive difference in the lives of our community. And last night he lost his life trying to make a positive difference and trying to protect our community.”

DeGuzman, who was known as “JD,” had been on the force for 16 years. He had previously received the department’s purple heart after he was stabbed during a traffic stop. 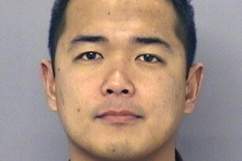