Jill Stein visited Cincinnati, Ohio earlier this week, which just happened to be the same week that the Republican National Convention was also in Ohio. Stein's campaign is continuing to gain momentum. She's raising more and more money thanks to progressive supporters who were once donating to Bernie Sanders and are now flocking to Stein's third-party campaign. If word about her continues to spread, it's possible that enough people will hear about her for her poll numbers to rise. Candidates need to poll at 15% in five national polls to get on the general election debate stage. It may be a long shot, but her supporters are ready to help her get there. Click through the gallery to learn the latest about Stein and to see photos of her trip to Cincinnati. She'll be rallying in Philadelphia on Monday, but she's already there now making appearances and talking to concerned voters. (Facebook/Cincinnati for Jill Stein) 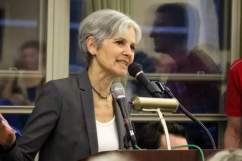