Jill Stein is a force to be reckoned with. She's been campaigning this week in Vermont, Bernie Sanders' home state, and she got a big welcome. The presumptive presidential nominee for the Green Party, Stein became a focal point in the national spotlight after Sanders endorsed Hillary Clinton. Sanders has not conceded yet and is still taking his campaign to the convention, but many of his supporters are beginning to look at Jill Stein as their new option if Sanders does not get the Democratic nomination. Stein has been very outspoken on numerous issues, including getting money out of politics and even pardoning Edward Snowden and adding him to her Cabinet if she were President. Some of Sanders' supporters have now endorsed Stein and her campaign contributions have recently skyrocketed. Click through the gallery to see more photos from Stein's trip to Vermont, stories about what happened, and more news about her campaign. (Emily Marie Ahtúnan) 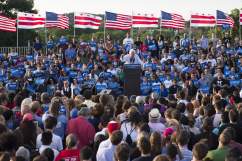 Read More
Breaking News, Jill Stein, Politics
Jill Stein's campaign is skyrocketing now that Bernie endorsed Clinton. See photos from her trip to Vermont and why she raised a quarter million in a week.