The Tesla driver, Joshua D. Brown, of Canton, Ohio, who died behind the wheel of the first car in self-driving mode, was watching a Harry Potter video when the crash occurred, the Detroit Free Press says.

Brown, 40, an ex-Navy Seal, died on May 7 in Florida when his Tesla Model S crashed after failing to activate its brakes because the auto pilot function didn’t realize that the white side of a tractor-trailer in front of the vehicle was not the sky, said the Free Press. It was the country’s first self-driving traffic fatality. 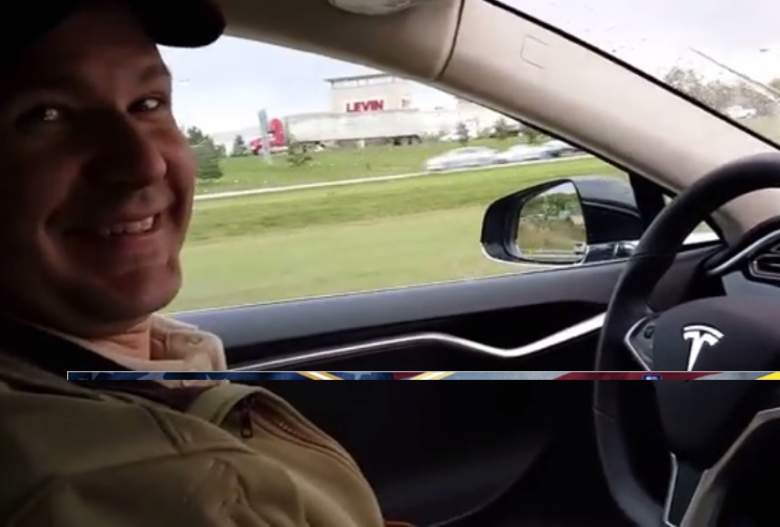 A screenshot from a video on Joshua Brown’s YouTube channel.

The autopilot mode in the Tesla was supposed to control the car while driving by itself, according to The Guardian. Tesla released a lengthy statement on the crash, saying, “Neither Autopilot nor the driver noticed the white side of the tractor trailer against a brightly lit sky, so the brake was not applied. The high ride height of the trailer combined with its positioning across the road and the extremely rare circumstances of the impact caused the Model S to pass under the trailer, with the bottom of the trailer impacting the windshield of the Model S.”

1. Joshua Brown May Have Been Watching Harry Potter on a DVD Player

This account comes from Frank Baressi, the 62-year-old driver of the truck that the car hit. However, it’s backed up by physical evidence; according to CNBC, Florida Highway Patrol Sergeant said there was a portable DVD player found in the vehicle.

According to CNBC, Baressi gave his account to the Associated Press, saying Joshua Brown was “playing Harry Potter on the TV screen” and “It was still playing when he died and snapped a telephone pole a quarter mile down the road.” However he said he heard the movie playing rather than seeing it.

Brown owned a technology company called Nexu Innovations. Tesla’s statement added that “his is the first known fatality in just over 130 million miles where Autopilot was activated.”

On the website of his technology company, Brown said that he started it “with two things in mind: to make a difference and to have fun. When I look at the world around me I see what it could be. I focus on what could be done to make this world a better place.”

3. Brown Had Posted Videos of the Car on Auto Pilot

Joshua Brown and had previously posted videos of the car driving on autopilot on his own YouTube channel. In one of the videos, reports The Guardian, the vehicle misses crashing on a highway. He also posted a video showing him driving without hands in slow traffic, and had received eight speeding tickets in six years, according to the Associated Press.

In one of the YouTube videos, he says that auto pilot takes the stress out of driving and removes worrying about it. “You get to your destination slightly slower,” he says. Friends described Brown as “like a little kid” when he got into the Tesla, UK Daily Mail reported.

In another video, he wrote about avoiding a crash: “Tesla Model S autopilot saved the car autonomously from a side collision from a boom lift truck. I was driving down the interstate and you can see the boom lift truck in question on the left side of the screen on a joining interstate road. Once the roads merged, the truck tried to get to the exit ramp on the right and never saw my Tesla. I actually wasn’t watching that direction and Tessy (the name of my car) was on duty with autopilot engaged. I became aware of the danger when Tessy alerted me with the ‘immediately take over’ warning chime and the car swerving to the right to avoid the side collision.”

The New York Times reports that Joshua Brown Was a Navy Veteran.

On his Facebook page, Joshua Brown posted a photo of himself overseas. (Facebook/Joshua Brown)

On his company bio page, Brown says he attended the University of New Mexico, Albuquerque for three years, studying physics and computer science, and then enlisted in the U.S. Navy following his junior year. He served 11.5 years in the Navy on active duty as a master explosive ordnance disposal technician. He was deployed overseas in “both warfighting and non-combatant roles” with Social Operations Forces units, his bio says.

On his Facebook page, Brown posted a photo of himself skydiving.

Next to the photo, Joshua Brown wrote, “This one is posted in honor of Warren Brown (my Dad) since he took me out jumping today. Thank you for the break and another fun day with you!”

5. Joshua Brown Was Not Married But Was Survived By His Parents

His published obituary says that Joshua Brown was survived by his parents Warren and Sueanne Brown of Stow, Ohio, and a sister, Amanda Lee, as well as numerous nieces, nephews, aunts, uncles and cousins. “His second family in the Navy now have the watch,” said the obit. His funeral was held at a country club in Silver Lake Ohio.

According to the obituary originally published in the Akron Beacon Journal, he was born January 20, 1976 in Great Lakes, Illinois, and graduated from Franklin Regional High School. The family requested donations to military and veteran wellness.

Joshua Brown posted a photo on Facebook with his father.