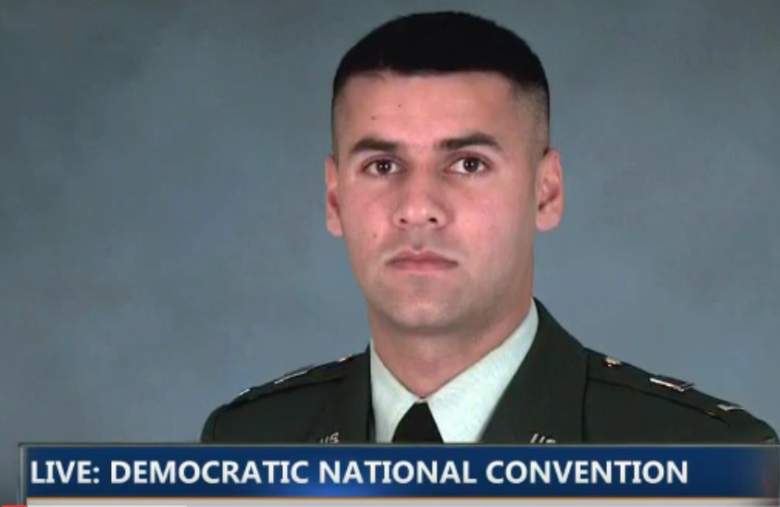 Khizr Khan, whose son, Humayun Khan, a Muslim, was an American service member who died heroically in Iraq, directed a message to Republican nominee Donald Trump at the Democratic National Convention. “You have sacrificed nothing,” Khan said to Trump from the convention stage in Philadelphia.

“Do not take this election lightly. This is an historic election and I request you to honor the sacrifice of my son,” said Khizr Khan in his speech. He then waved a copy of the U.S. Constitution in the air and said: “Donald Trump, have you even read the constitution? I will gladly lend you my copy.”

Khan’s speech comes as Democrats continue to criticize Trump for his proposal to ban all Muslim immigration to the United States. Basketball great Kareem Abdul Jabbar, who is also Muslim, spoke before Khan at the convention.

“If it was up to Donald Trump, [Humayun] never would have been in America,” Khan said. “Donald Trump consistently smears the character of Muslims… He vows to build walls and ban us from this country.”

Khan’s son was an Army captain born in the United Arab Emirates, who moved to Maryland as a small child, graduating from the University of Virginia before enlisting in the U.S. Army, said Hillary Clinton in a video introducing Khan’s speech.

Khizr Khan son was the embodiment of a true patriot! https://t.co/jHdkKasQQZ

In June 2004, Humayun Khan was serving in Iraq, and his infantry unit was guarding the gates of its base, when a suspicious vehicle appeared. “Captain Khan told his troops to get back, but he went forward. He took 10 steps toward the car,” said Clinton in the video. The car exploded, killing Khan, but the rest of the troops were saved because he stepped forward.

Mr.Donald Trump
Would you like to visit the Grave of Fallen American MUSLIM Hero in Arlington:Winner of Purple Heart pic.twitter.com/7fhUGI0GmM

According to ABC, Khizr Khan’s son was one of 14 American Muslims who died serving in Iraq in the 10 years after the Sept. 11, 2001 terrorist attacks.

According to a U.S. Department of Defense press release, Captain Humayun S. M. Khan, 27, of Bristow, Virginia, died June 8, 2004, in Baquabah, Iraq, “after a vehicle packed with an improvised explosive device drove into the gate of his compound while he was inspecting soldiers on guard duty.” The release said that Khan was assigned to Headquarters Company, 201st Forward Support Battalion, 1st Infantry Division, Vilseck, Germany.

Arlington Cemetery says that Capt. Khan “was laid to rest with full military honors. Captain Khan was a Pakistani American who served in the U.S. army as an ordnance officer, being the senior-most community member to die in Iraq.” The press release on his funeral said, “His colleagues and superiors remembered him for his courage, honesty, sense of humor and grace while in the field, even under pressure. Captain Khan’s colleagues eulogized his exemplary services and praised him for the leadership he provided to his troops.”

A Muslim chaplain who spoke at the funeral highlighted “the ethnically-diverse group that had come to pay its respects to Captain Khan,” who was described in the release as “one amongst the growing number of Pakistani Americans in the U.S. Army.”