A man who was “troubled by recent incidents involving African-Americans and law enforcement officers in other parts of the country” has been accused of shooting five people in Tennessee, killing a woman and wounding three others, including a police officer.

Lakeem Keon Scott, 37, was shot by police after opening fire about 2:20 a.m. Thursday on Volunteer Highway in Bristol, the Tennessee Bureau of Investigation said in a press release. Scott was seriously wounded, but was in stable condition Friday afternoon, police said.

The victim killed in the shooting was identified as Jennifer Rooney. The other victims are expected to survive.

The shootings came eight hours before a gunman opened fire during a rally against police brutality in Dallas, killing five officers and wounding seven officers and two civilians. The shooter, Micah Xavier Johnson, died after a police robot detonated a bomb near him during a standoff.

1. Scott, Armed With an ‘Automatic-Style Rifle’ Fired Through a Motel Window & at Cars Before a Gun Fight With Police, Investigators Say

Lakeem Scott was armed with two weapons, an “automatic-style rifle” and a pistol, and had a large amount of ammunition during the Thursday morning incident, the Tennessee Bureau of Investigation said in a press release.

Scott first fired shots through the window of the Days Inn on Volunteer Parkway, wounding the motel’s clerk, police said.

He was confronted by officers from the Bristol Police Department.

“During that exchange, the investigation shows Scott fired at the three responding officers,” the TBI said. “After which the officers returned fire, striking Scott.”

He was taken to the Bristol Regional Medical Center, where he remained in serious, but stable, condition on Friday, police said.

Suspect among those at the hospital after he shot at random cars and police officers. pic.twitter.com/lOwAsBA2qq

The Tennessee Bureau of Investigation said they first spoke to Scott on Friday.

“The work to develop a thorough understanding of his motivation for this incident remains central to the ongoing investigative work,” the TBI said.

The TBI told WJHL-TV they haven’t determined yet if Scott was only targeting white people and police officers.

“We aren’t prepared to go that far,” the TBI told the news station, adding they are “still attempting to firm up the motive.”

The FBI, ATF, the Sullivan County Sheriff’s Office and the Bristol Police Department are assisting in the investigation. The results of the investigation will be turned over to the district attorney.

“The TBI would like to reiterate there is currently no public safety threat to the Bristol community,” the agency said in a press release. “The ongoing investigation indicates the alleged gunman acted alone. Anyone with specific information about the incident or the individual believed to be responsible may contact the Tennessee Bureau of Investigation at 1-800-TBI-FIND.” 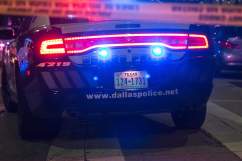 3. Scott Is Originally From New York & Had ‘No Adult Arrest Record’ in Tennessee

Scott has “no adult arrest record,” in Tennessee, the TBI said. It is not known if he has been arrested elsewhere.

According to his Facebook page, Scott is originally from the Bronx, New York. He went to Sarah J. Hale High School in New York.

4. Rooney Was Out Delivering Newspapers When She Was Shot & Killed

Jennifer Rooney, a 44-year-old wife and mother of two, was delivering papers for the Bristol Herald-Courier when she was shot and killed in her car, the newspaper reports.

“Everything was good about Jennifer,” David Rooney, her husband, told the Herald-Courier. “She was a wonderful mother and wonderful wife. She was a big-hearted person who gave 110 percent to everyone — especially the children. Whether it was school or the martial arts they are involved in — she was always there for them.”

The other victims include Bristol Police Officer Matthew Cousins, who sustained a superficial leg wound and was treated and released from the hospital, the Tennessee Bureau of Investigation said.

Deborah Watts, the Days Inn clerk shot when Scott fired through the motel’s window, is in serious, but stable, condition, police said.

5. The Gunman in Dallas Told Police Negotiators He Was ‘Upset With White People’

Several hours after police said Scott went on a rampage in Tennessee, a gunman opened fire at a Black Lives Matter march in Dallas, Texas.

The shooter, Micah Xavier Johnson, told police negotiators he was angry about two recent police killings of black people, in Minnesota and Louisiana, and was upset with white people, officials said. He said he was targeting white police officers, authorities said.

Alton Sterling was fatally shot by two officers in Baton Rouge, Louisiana on Tuesday. A day later, Philando Castile was killed by police during a traffic stop in Falcon Heights, Minnesota. Parts of both shootings were caught on videos that spread quickly across social media. Investigations into both those shootings are ongoing and no officers have been charged.

Read more about Micah Johnson and the Dallas shooting at the link below: