Elizabeth ‘Liddy’ Dole is the wife of former Senator and Republican Presidential nominee Bob Dole. Elizabeth, 79, has spent a life in politics and was also a senator herself, representing North Carolina for a term from 2003 to 2009. The couple have been married since 1975. They have no children, although Dole has a daughter, Robin, from his first marriage.

Her husband was the 1996 Republican nominee, but lost to Bill Clinton. He was also Gerald Ford’s running mate in 1976, when Ford lost to Jimmy Carter. Dole, 92, has been a supporter of Donald Trump and is in Cleveland for the Republican National Convention.

On Wednesday, January 17, 2018, Bob Dole was awarded a Congressional Gold Medal “in recognition of his service to the nation as a ‘soldier, legislator and statesman,'” according to NPR.

“Bob Dole always stood for what was just and what was right,” House Speaker Paul Ryan said. “Because of you, America is much better.”

Elizabeth Dole and his daughter, Robin, were in attendance when he received this honor.

1. She Was the First Woman to Serve in Different Cabinet Positions for Different Presidents 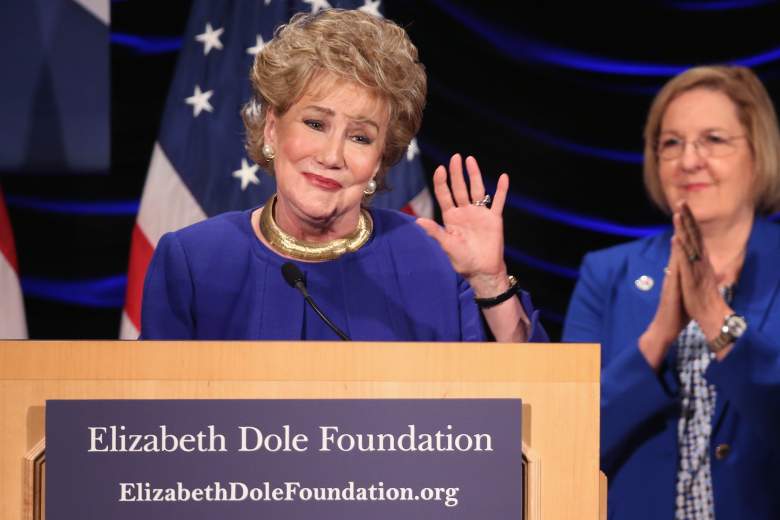 Mrs. Dole spent most of her life in the White House between the Lyndon B. Johnson and George H.W. Bush administrations. She was one of the few Johnson staffers to stay in the White House after Richard Nixon was elected, but did not become a Republican until 1975. She served on the Federal Trade Commission from 1975 to 1979, when she left to work on Bob Dole’s 1980 presidential campaign.

During her time as Secretary of Transportation, she was named defendant in a key Supreme Court case, South Dakota v. Dole. South Dakota, which allowed 19-year-olds to buy alcohol, challenged Dole’s request that federal highway funding be denied to states with under-21 drinking laws. The Supreme Court ruled in Dole’s favor, ruling that it was not unconstitutional for Congress to include the measure in the National Minimum Drinking Age Act of 1984.

2. She Was President of the Red Cross & Accepted No Salary During the First Year 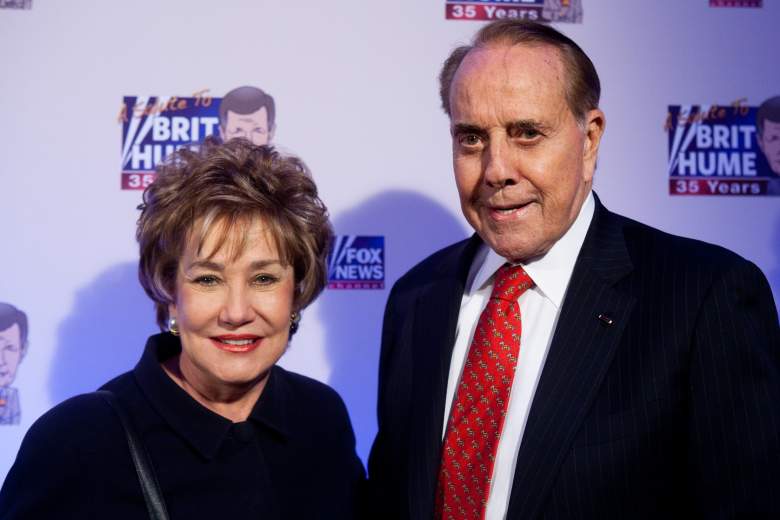 In May 1996, The New York Times reported that Dole successfully convinced then-Defense Secretary William Perry to authorize $43.5 million over three years to the Red Cross so it could continue letting military families know about births and deaths.

“It boils down to this. Because she is Liddy Dole, we were not going to pick a fight with her. She’s very important in this town,” a Pentagon official told the Times in 1996.

That year, there were some questions about Dole remaining president of the Red Cross if her husband won the presidency. Of course, that didn’t become an issue as Bob Dole lost to Clinton.

3. She Ran for the White House Before Becoming Senator 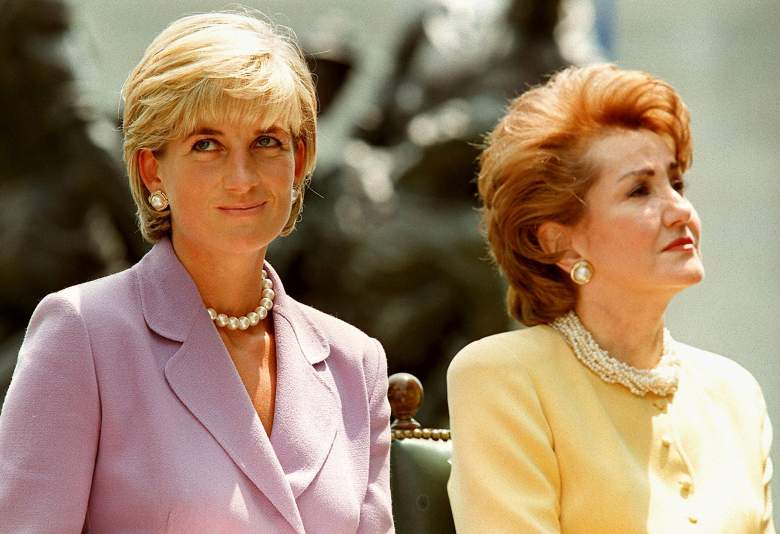 Princess Diana and Elizabeth Dole when Dole was still president of the American Red Cross. (Getty)

Despite Dole never holding an elected office before 2000, she decided to run for the presidency herself. She had a strong early showing in polls, often coming in second behind eventual President George W. Bush. However, she dropped out in October 1999, long before the primaries started.

The Baltimore Sun reported in October 1999 that Dole cited lack of funds as the major reason for ending her campaign. “The bottom line remains money,” she said during a press conference. She had been considered the first serious female candidate for the White House from a major party.

There was some speculation that she could have served as George W. Bush‘s vice president, but that role was filled by Dick Cheney.

4. She Was the First Woman Senator from North Carolina 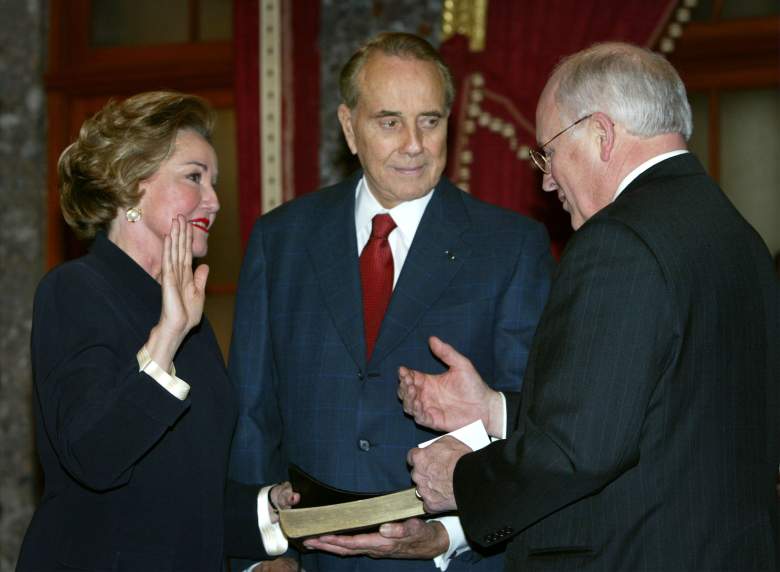 Elizabeth Dole being sworn in as North Carolina Senator in 2003. (Getty)

Although Mrs. Dole hadn’t regularly lived in her home state of North Carolina since 1959, she decided to run for Senate there in 2002 after Senator Jesse Helms announced his retirement. In 2001, sge was registered to vote in Kansas, but terminated her registration there in August, The New York Times reported at the time. Nevertheless, Dole easily won the Republican nomination and beat her Democratic challenger.

During her time in the Senate, she was the first woman to chair the National Republican Senatorial Committee from 2004-2006. She was also a member of the famous nonpartisan Gang of 20 that supported energy reform.

When Dole ran for re-election in 2008, she was widely criticized for her infamous “Godless” ad that tried to paint Democrat Kay Hagan as being godless. As CNN noted at the time, the Dole campaign said the ad was inspired by Hagan allegedly attending a meeting at the home of a Godless Americans PAC advisor. Hagan told reporters that she never heard of the group until she saw Dole’s press release.

“This is politics of the worst kind, and I know it has been rejected by North Carolinians at every level. It is so unbecoming of a woman like Elizabeth Dole. This is a fabricated, pathetic ad,” Hagan said. “I am a Sunday school teacher, I am an elder at First Presbyterian Church in Greensboro, my family has been going to this church for over 100 years, I have raised my children there. I have been involved in youth missions.”

5. She Started Her Own Foundation to Help Military Families

Elizabeth Dole advocates for "hidden heroes"Former senator and presidential advisor Elizabeth Dole started a program for caregivers of wounded military veterans. She visited "CBS This Morning" to discuss her new program, and why it hits home. SUBSCRIBE to the CBS NEWS Channel here: http://bit.ly/WKcQhX2013-06-20T15:34:02.000Z

After her loss, Dole turned to philanthropic efforts, founding the Elizabeth Dole Foundation, which helps military caregivers “by strengthening the services afforded to them through innovation, evidence-based research, and collaboration.”

In an interview with Caregiver.com, Dole said she came up with the idea after Bob Dole, who was wounded during World War II, was hospitalized at Walter Reed National Military Medical Center for 11 months.

“Being there almost every day myself, I got to know many of the wounded warriors and their caregivers,” Dole said. “I just could not believe what a challenging situation it was for the caregivers. And I got to know many of them well by just trying to help them have an evening away from the hospital room—taking them downtown to Washington for dinner, having a good meal and seeing the monuments at night.”

In a CBS This Morning interview, Dole called military caregivers “hidden heroes” who need attention. When asked if she missed the day-to-day activities in the Senate, she joked that she doesn’t have the time. 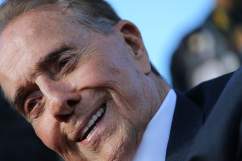