Jarrett Hill, a Los Angeles-based writer, first the uncovered similarities in sections of both speeches about values.

The speech by Melania Trump, the wife of presumptive Republican nominee Donald Trump, was considered to be the highlight of the first day of the GOP convention.

The paragraph in Melania Trump’s speech does not use the same exact wording as Obama’s 2008 speech, but includes the same theme and many of the same words.

Per MSNBC, some 22 of the 26 words in one of the Melania passages was from a Michelle Obama passage

You can watch the part of Melania Trump’s speech below:

Here is the similar paragraph from Obama’s speech:

Here is a transcript of the paragraph in Trump’s speech:

From a young age, my parents impressed on me the values that you work hard for what you want in life, that your word is your bond and you do what you say and keep your promise, that you treat people with respect. They taught and showed me morals in their daily life. That is the lesson that I continue to pass along to our son. And we need to pass those lessons on to many generations to follow because we want our children in this nation to know that the only limit to your achievements is the strength of your dreams and your willingness to work for them.

And here is a transcript of the similar paragraph in Obama’s speech:

And Barack and I were raised with so many of the same values: that you work hard for what you want in life; that your word is your bond and you do what you say you’re going to do; that you treat people with dignity and respect, even if you don’t know them, and even if you don’t agree with them.

And Barack and I set out to build lives guided by these values, and pass them on to the next generation. Because we want our children — and all children in this nation — to know that the only limit to the height of your achievements is the reach of your dreams and your willingness to work for them. 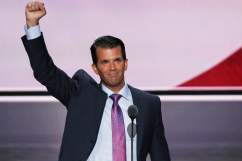 Did Donald Trump Jr. Plagiarize Part of His RNC Speech? No.

Here is video of the two speeches side by side (h/t @MikeHearn):

Donald Trump’s senior communications advisor, Jason Miller, issued a statement on Melania’s speech on behalf of the campaign early Tuesday morning, but did not mention the plagiarism accusation:

In writing her beautiful speech, Melania’s team of writers took notes on her life’s inspirations, and in some instances included fragments that reflected her own thinking. Melania’s immigrant experience and love for America shone through in her speech, which made it such a success.

As the plagiarism accusation spread like wildfire on social media, the presumptive Republican nominee tweeted that he is “very proud” of his wife:

It was truly an honor to introduce my wife, Melania. Her speech and demeanor were absolutely incredible. Very proud! #GOPConvention

Melania Trump told NBC’s Matt Lauer she wrote the speech “with as little help as possible”:

For the record, Melania Trump claimed she wrote the speech she delivered tonight. pic.twitter.com/pxLS6S3vSz

According to CNN, she worked with a speechwriter “for the last five to six weeks, honing her speech.”

They’re a couple of phrases. It’s basically three places in the speech and its fragments of words. She knew what she was doing. And she never cribbed from another speech without acknowledging that she was quoting somebody else. We’re talking about words like compassion, love of family, respect. These are not words that are unique words, that belong to the Obamas.

The plagiarism accusation spread quickly on social media Monday night. One of the reactions came from President Obama’s former speechwriter:

Holy shit. They're nearly identical. Someone is seriously fired. https://t.co/SIXpite8A9

Tbh, I was more offended by just about every other speech than Melania's plagiarized paragraphs.

Favreau said the 2008 speech was written by Sarah Hurwitz:

Sarah Hurwitz, Michelle's head speechwriter, used to be Hillary's. So the Trump campaign plagiarized from a Hillary speechwriter.

Should also say that, like her husband, Michelle wrote a lot of that 2008 campaign speech herself.

Here are some of the other tweets about the apparent plagiarism:

Media twitter is losing it — we get fired, rightly, if we do what Melania's speechwriters just did. But does the rest of America care?

Hello, it's not just about plagiarism. Melania plagiarized the portion about VALUES. #cantmakethisup #RNCinCLE

Just asked Melania Trump how her speech went and she replied, "It was the best of times, it was the worst of times…"

Another portion of the speech led to many jokes on Twitter about whether she “Rickrolled” America by using a line from a Rick Astley song in her speech:

Melania going with the #RickRoll reference during the #RNCinCLE (now with music). pic.twitter.com/oBCSITnY4r