Pence appeared July 27 at a County Expo Center in Waukesha, Wisconsin, a Republican stronghold. Donald Trump’s running mate spoke alongside Wisconsin Governor Scott Walker, who had supported Ted Cruz during the primary after dropping out of the presidential race himself. According to Fox 6 Milwaukee, Walker called Pence a “close friend” and a “Reagan conservative” during the event.

Pence told Fox 6 that he chose to campaign in Wisconsin first by himself because Wisconsin “looms so large” in the presidential race. Pence spoke against a backdrop of American flags.

1. The Washington Post Says DelReal was Patted Down By Police & He Was Denied a Press Credential 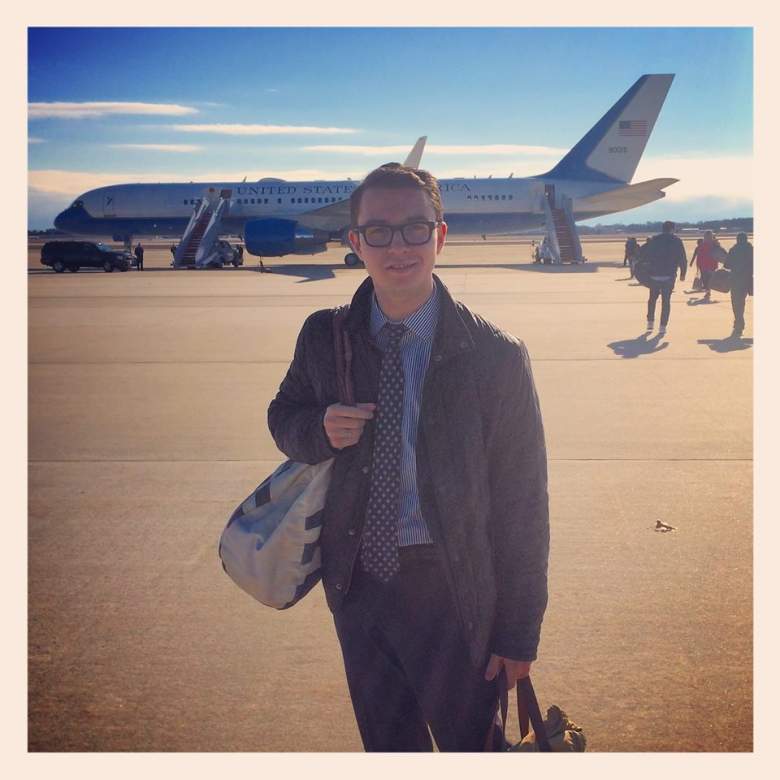 The Post says the reporter, Jose A. DelReal was “barred from entering the venue after security staffers summoned local police to pat him down in a search for his cellphone.” The Post says volunteers refused to give DelReal a credential to cover the event at the check-in table at the Expo Center.

DelReal joked about the incident on Twitter, where he describes himself as “2016 campaign reporter for The Washington Post, covering Donald Trump.”

He sometimes Tweets observations from the campaign trail:

Tuned into the Clinton/Kaine debut. Striking, as a Trump reporter, to see their pitch for optimism. Quite a contrast.

On his LinkedIn site, DelReal says he has been a reporter for the Washington Post since 2014. Previously, he was a fellow at Politico for one year and four months, an editorial assistant for Boston Review, an editorial/web intern for The New Republic, and an editor for the Anchorage Daily News. He is a graduate of Harvard University, where he worked on the Crimson student newspaper as a political reporter and magazine editor. 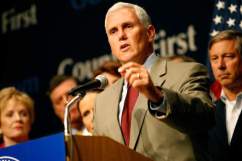 2. Pence’s Campaign Now Says It Regrets The Incident, Reports Say & Pence Was Asked About it On The Radio

According to the Post, “Pence’s campaign expressed embarrassment and regret about the episode, which an official blamed on overzealous campaign volunteers.”

The Post said that DelReal tried to enter the event through the general admission line after being barred from obtaining a media credential and “He was stopped there by a private security official who told him he couldn’t enter the building with his laptop and cellphone.”

DelReal pointed out that citizens attending the rally weren’t banned from bringing in cell phones and the official, who was not identified, said, “Not if they work for The Washington Post,” according to The Post. After putting his phone and laptop in his car, he says he was patted down by sheriff’s officials, but they still wouldn’t let him in even though he no longer had the phone.

The Milwaukee Journal Sentinel reported that Waukesha County Sheriff’s Inspector Torin Misko said “deputies were there to assist the Secret Service with security detail for the private event.” Misko said DelReal was not present for a security sweep and was told he could enter through general admission without his electronic equipment. The Journal Sentinel said the security sweep was for “heavy-duty electronic equipment” and that others were allowed in with laptops and cellphones until 15 minutes before the event.

A transcript of the Hugh Hewitt radio show says that Pence was asked about the DelReal incident and said, “Well, I found out about that. We had a great rally the other night with Scott Walker in Wisconsin, and some of the local folks, some of the local folks you know, asked for credentials from reporters, and there was a reporter that was not permitted in the setting. And I’ll tell you, we’re all talking about that. I had a long, I have a long history, as you well know, Hugh, of advocating and defending for a free and independent press.”

3. Trump’s Campaign Has Banned Media Outlets From Covering Events Before & Revoked The Post’s Credentials in June

The Trump campaign has had incidents with the media before. In June, CNN reported on what it called a “blacklist,” saying that Trump had been banning media outlets from campaign events for almost a year. The list already included the Post and what CNN called “a premiere local newspaper” and “the largest Spanish-language broadcaster in the country.”

CNN listed BuzzFeed, Politico, The Daily Beast, Univision, and The Huffington Post as banned outlets. According to CNN, Trump revoked the Post’s credentials in June, complaining of unfair coverage, leading Post Editor Marty Baron to call it “a repudiation of the role of a free and independent press.” However, this was the first time Mike Pence had been accused of banning a reporter during the presidential race. Not so with Trump.

There was the controversial incident involving then Trump campaign head Corey Lewandowski and former Breitbart reporter Michelle Fields; he was charged with simple battery after Fields alleged that Lewandowski bruised her arm by yanking it, but the charge was dismissed, and Lewandowski denied the allegations.

Then there were the comments Trump made about expanding libel laws if he becomes president. NPR wrote that Trump said he wants to “open up” libel laws so he can more easily sue the press. In June, a Politico reporter was ordered to leave a Trump event in California after being spotted there without press credentials, which were refused.

4. At The Event, Pence Promised That Trump Will Bring ‘Conservative Leadership’ To The Presidency & Called Himself a ‘B-List Republican celebrity’

Pence joked that he was a “B-List Republican celebrity,” said The Milwaukee Journal Sentinel. Wisconsin is a swing state; the state has a Republican governor and Republican-controlled Legislature but helped elect President Barack Obama. However, the county that Pence was speaking in is known for its conservative voting.

Excited to join my friend Mike Pence in Waukesha tomorrow night. He’s a good man and will make an outstanding Vice President.

Pence also told the crowd he answered Trump’s call to be VP “in a heartbeat,” and said Trump would nominate good Supreme Court justices and rebuild the military, The Journal Sentinel said. Walker told the crowd that he was voting his “conscience” and praised Trump and Pence, the newspaper said.

Sharing a laugh with @mike_pence backstage tonight in Waukesha. pic.twitter.com/HaxgeLyjb4

Channel 12 Milwaukee says Pence criticized Kaine’s tax policies and said they are very different candidates, even though they’ve both been governors. He said Trump would appoint “constitutional conservatives” to the U.S. Supreme Court.

Some in attendance thought the crowd was sparser than expected for the venue.

It's not exactly packed at the Waukesha Expo Center for Mike Pence tonight. Not a good sign for Republicans.

Gearing up for an exciting rally with Gov. @mike_pence! #MakeAmericaGreatAgain pic.twitter.com/k4O0UjHfse

Trump lost the Wisconsin primary by 12 points, said WISN-TV, largely because of a boost in support for Ted Cruz in southeastern Wisconsin.