There were early reports that the gunman in the Munich, Germany shooting spree may have been targeting foreigners or immigrants. Those reports had people asking: Was the gunman in Munich a Neo Nazi? Munich police said in a news conference that the shooter was an 18-year-old German-Iranian man from Munich, Ali David Sonboly, who was inspired by far-right killer Anders Breivik, The Independent says.

They said they can find no ties to ISIS; Sonboly may have been targeting victims of “Turkish and Arab” origin because other youths from those groups “had picked on him in school” and he was obsessed with past school shootings, but one eyewitness did say he uttered a slur about foreigners, said UK Telegraph. The Telegraph now says police do not believe the attack was “terrorism-related” and they can’t find evidence of political motivation. Sonboly’s hairdresser said the family is Shia Muslim but Sonboly wasn’t religious; ISIS opposes Shia Muslims, Telegraph said. Sonboly had the Turkish flag as his cover photo on Facebook.

There were conflicting reports on the shooter’s motive and background in the chaotic aftermath of the shooting; CNN says police were initially calling it a terrorist attack, though, and that a witness heard the gunman shout, “Allahu Akbar” before shooting children in the face. The Sun says German police have not yet officially linked the shooting spree to Islamic fundamentalism; on July 23, police said the motive is still not clear but that they found an “obvious link” to Breivik as well as articles and a book on mass shooters, including school shooters.

The background and motivations of the shooter appear complex; The Independent says police believe that Sonboly researched earlier mass shootings, had a book on why school shooters kill, and had even traveled to a previous site of a German school shooting. He complained of being bullied at school.

Munich police initially said they thought there were three gunmen but now say they believe there was just one shooter, Sonboly, and that he is dead:

We found a man, who killed him himself.
We assume, that he was the only shooter. #gunfire #munich

The gunman may have shouted “Ich bin Deutscher” (“I am German”) on a video as bystanders shouted insults at him from a nearby rooftop. Reddit has posted a translation of the German in the unconfirmed video. CNN says it is analyzing the rooftop video and that the purported gunman talks about medical treatment and says he was a German. However, if the shooter was of Iranian descent yet German born (as he says in the video), it could explain the initial discrepancies between the gunman’s Islamic comment and German claim. Indeed, Munich police now say the shooter had dual nationality.

According to the BBC, Breivik “harboured radical right-wing views” and said his mass murder “was aimed at stopping Muslim immigration to Europe.” He murdered 77 people in Norway on July 22, 2011 in a bomb attack in Oslo and a mass shooting at an island youth camp for “young centre-left political activists on the island of Utoeya.” Breivik is being held in solitary confinement.

Watch the “I am German” rooftop video here:

The eyewitness who spoke to CNN says she heard the gunman shout, “Allahu Akbar” as he shot children in the face at the McDonalds; he then appears to have gone outside and started spraying other people with gunfire, a horrific scene captured on citizen video:

In the McDonalds video, people flee as the rapid gunfire can be heard and a man who appears to be a gunman points a weapon at them.

CNN reported that the woman named Lauretta told CNN she was in the McDonalds near the mall when a gunman emerged from the bathroom and started shooting. She told CNN’s Dugald McConnell: “I come out of the toilet and I hear like an alarm, boom, boom, boom. He’s killing the children (…) The children were sitting to eat. They can’t run.” The man yelled “Allahu akbar!” she said, according to CNN.

Although they have hesitated thus far to ascribe an official motive to the attack, German police were saying the shooting looked like a terrorist attack, CNN said. CBS News also reported that police were calling the attack “suspected terrorism.” On July 23, though, police said that they could not find a clear political motivation for the attack.

Earlier reports in British media said that the gunman may have shouted anti-foreigner sentiments. The Daily Mirror had reported: “Taxi driver says #Munich shooter “was not foreign.'” That report came originally from German media, Daily Mirror said, and remains unconfirmed:

The Daily Mirror also reported that the Munich gunman “shouted ‘f***ing foreigners’ before firing shots.'” The attack started at a Munich, Germany shopping mall in Bavaria, before moving to the local McDonalds; police in Germany had launched a major manhunt after the shooting. Police say at least 9 people are dead, not counting the shooter, who is also deceased. The Sun had earlier pointed out that the attack occurred on the anniversary of the 2011 mass shooting by Norwegian far-right killer Breivik. CNN reported the mall where the shooting occurred is adjacent to the site of the 1972 Munich Olympics.

The Mirror says “One of the gunmen screamed “Scheiß Ausländer” meaning ‘f***ing foreigners,’ it’s been reported.” Bil.de, a German media outlet, reported that “The man was heard shouting the racial slur, according to Bild.de.” However, Munich police now say there was just one gunman, the German-Iranian teenager. Bild says that the gunman lived in “the district of Maxvorstadt” with his parents. Bild said he went to school near the residence, and his neighbors saw him the day before. Bild quoted a neighbor as saying, “He lived right next to me. I saw him only occasionally and do not really know him. A friend of mine was his classmate, saying that he was more of a quiet type.”

A video is being shared of apparent shooter on parking garage shouting "I am German" (bystander yelling back "No, you're a wanker") #Munich 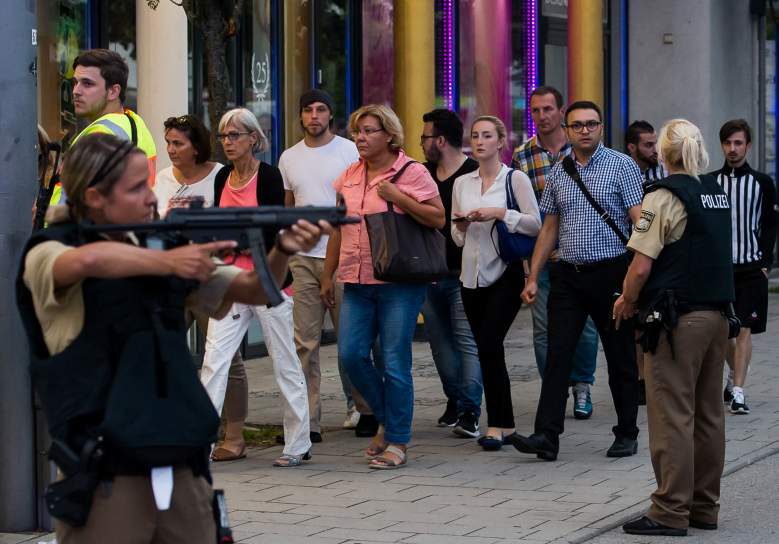 MUNICH, GERMANY – JULY 22: Police officers escort people from inside the shopping center as they respond to a shooting at the Olympia Einkaufzentrum (OEZ) at July 22, 2016 in Munich, Germany. According to reports, several people have been killed and an unknown number injured in a shooting at a shopping centre in the north-western Moosach district in Munich. Police are hunting the attacker or attackers who are thought to be still at large. (Photo by Joerg Koch/Getty Images)